Why write for children?


Each time I’m asked this, I probably come up with a different answer, and sometimes I’m tempted to be a little sharp – to answer, “Why not?” or “Children are human too, you know!” Actually, I write for children because that’s the way stories come to me.


C.S. Lewis claimed to write for children ‘because a children’s story was the best art form for something he had to say’.  Lewis probably believed it when he wrote it; but I think he was kidding himself. To me the statement sounds not only a little pretentious, but suspiciously like something he came up with after he’d written his books.


I don’t honestly believe anyone chooses a genre because they decide in advance that it’s the best art form for something they wish to say. (Unless they’re in advertising.) Rather, you get grabbed by an idea. Often, for me, a picture of something happening. Lewis himself said that ‘The Lion, The Witch and The Wardrobe’ started with a picture in his head of a faun with an umbrella walking through a snowy forest.


Well, if you’re being haunted (and I mean haunted: possessed) by an umbrella-carrying faun in a snowy wood, what are you going to do with it? You’re probably going to write a children’s story, because it’s going to take superhuman ingenuity to work it into a novel for adults. It’s not even very likely to become part of an adult fantasy. The comically domestic detail about the umbrella says that. Fauns in adult fantasy are going to be sexier. They’re going to riot through those woods in a wild, dangerous Dionysiac revel: and they’re not going to want umbrellas.


No: the material imposes the form. Fauns with umbrellas will insist on you writing a children’s fantasy for them. Other things may then find their way into that story; your moral outlook, world picture, concerns, loves and hates. No author is free of these, and one can only hope to find sympathetic readers who understand or at least make allowances. But throw away that umbrella, and you’ve thrown away the book. 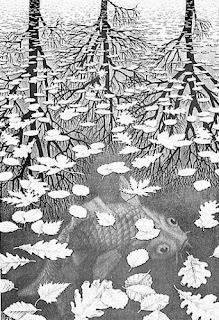 your shimmering little hook into the deep pool where stories come from, and something bites. You pull it up (if you're lucky). But look what happens! The fish talks! It opens its whiskery, blubbery mouth and speaks to you! And to me it says:

This is a fairytale...

Posted by Katherine Langrish at 04:01 2 comments: