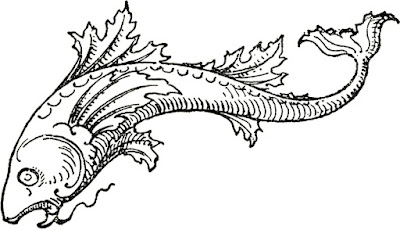 After I’d thanked the Hertfordshire gentleman whose thoughtful letter prompted my post of last week – and yes, it was a real letter that came through a real letter box – he has written to me again. And I have to share it with you. This time it concerns a Narnian fish called a pavender, which is mentioned not only in Prince Caspian, but also in The Silver Chair when Jill and Eustace enjoy one of the few good meals of their adventure, a royal feast in the great hall of Cair Paravel.

The banners hung from the roof, and each course came in with trumpeters and kettledrums. There were soups that would make your mouth water to think of, and the lovely fishes called pavenders, and venison and peacock and pies, and ices and jellies and fruit and nuts, and all manner of wines and fruit drinks.

I’d sometimes idly wondered if there really might be a fish called a pavender – after all, there are plenty of strangely named English fishes, such as gudgeon, chub, dace, roach, etc – or whether Lewis had simply invented it. Well, the answer is neither, and it’s far more fun! Here is the Hertfordshire gentleman to explain it all:

"In Prince Caspian, as you may remember, Trumpkin catches and cooks for the Pevensies some delicious little fish called pavenders. This, I believe, is a private scholarly joke of Lewis’s. It is a reference to a poem published originally in Punch, called ‘A False Gallop of Analogies’, by one Warham St Leger. The conceit of the poem springs from a reference to ‘the chavender, or chub’ in Isaac Walton’s The Compleat Angler. So it begins:

There is a fine stuffed chavender,

That decks the rural pavender

Wherein I eat my gravender,

And so on, with references to ‘sweet lavender, or lub’ and administering a snavender, or snub, to an intrusive young cavender, or cub; and the ravender, or rub, of having to return to town. If you are interested, you can find the whole poem in full at: http://www.poetrynook.com/poem/false-gallop-analogies."

(In fact I suggest you visit this link without delay and read the poem in full; it will make you happy!) The Hertfordshire gentleman continues:

"I am only aware of the poem through encountering it in the Festival of Britain issue of Punch, which I was given by my father at the time. As well as topical items … it contained an anthology of notable cartoons and other snippets, from issues over the past century. Lewis would no doubt relish the reference to the ‘pavender, or pub’ and have stored it away for future use"

I don’t need to tell you how delighted I am to have learned the origin of this obscure Narnian fish (or dish) and (in the words of the other Lewis, Lewis Carroll) to have un-dish-covered the fish and dish-covered the riddle.

Find my book, "From Spare Oom to War Drobe: Travels in Narnia with my nine year-old self"  at Hive.co.uk, at Amazon.co.uk, and at all good bookshops.

Posted by Katherine Langrish at 04:24 8 comments: 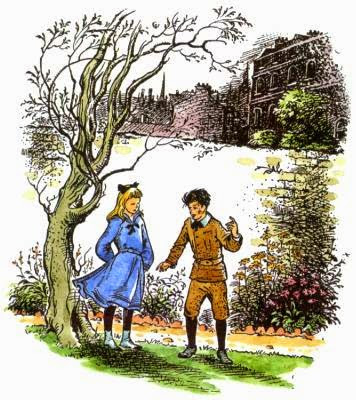 About a month ago I was asked by the website Female First to write a short piece about families in Narnia, and I came to the conclusion that happy families are not easy to find there. You can read what I wrote here, but to summarise: the Pevensies’ parents are remarkable mainly for their absence; we never even set eyes on them until Lucy sees them waving from a distant “English” spur of Aslan’s holy mountain, by which time they are all of them dead. Eustace Scrubb’s parents send him to boarding school at the ominously named Experiment House, where he is bullied and made miserable. So do Jill’s. All we learn of Polly’s parents is that her mother sends her to bed for coming home late. Digory's father is far away in India, so he and his dying mother are forced to live with kindly but ineffectual Aunt Letty, and dangerously ‘mad’ Uncle Andrew. 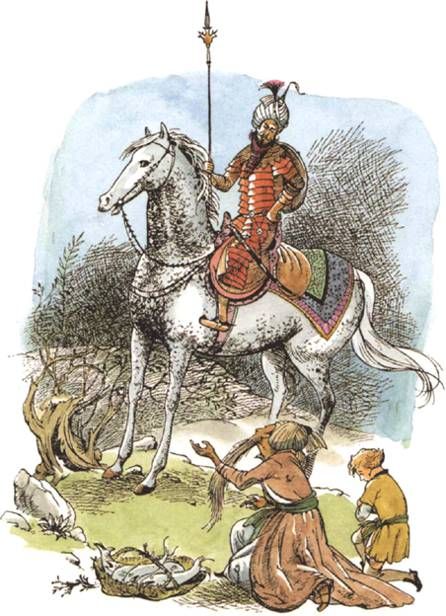 So much for the children from our world. What about those born in Narnia itself? Shasta (aka Prince Cor of Archenland) is stolen at birth and raised by an abusive foster-father who tries to sell him into slavery. Aravis escapes from a father who is pressuring her into a detestable marriage. Prince Caspian’s father has been murdered by his usurping uncle, King Miraz, so that when his aunt, Queen Prunaprismia, gives Miraz an heir, Caspian’s own life is in immediate danger. Whether true fathers or surrogates, father-figures in the Narnia books tend either to be absent, or else very much part of the problem. 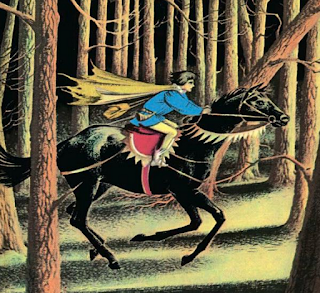 Orphaned children, or children with absent or neglectful parents are of course a recurrent theme in children’s fiction and in fairytales. Without adults to help them, such children have to solve their own problems: in narrative terms it gives them agency and establishes an immediate bond of sympathy between reader and character. Think of Hansel and Gretel, Cinderella, Snow-White, Heidi – or Harry Potter, Lyra and Will, and Seren Rhys in Catherine Fisher's enchanting middle-grade book The Clockwork Crow (which I highly recommend). Orphaned or neglected children frequently appear in adult fiction too, such as Jane Eyre, or Rudyard Kipling's Kim, or Cosette in Les Miserables, and are liberally scattered throughout the works of Dickens (David Copperfield, Little Dorrit, Pip, Oliver Twist, Jo the crossing sweeper and so on).

But there is a poignancy about the Narnian orphans that may ultimately derive from Lewis’s loss of his own mother to cancer when he was nine years old. As was then common practice, she was nursed and even operated upon at home, and in his autobiography Surprised by Joy he describes how her illness affected him and his brother: ‘Our whole existence changed into something alien and menacing, when the house became full of strange smells and midnight noises and sinister whispered conversations’. He tells of desperately praying God for a miracle to save his mother, and the terror of being taken into her bedroom ‘to see her’ when she had died.

Then, just a few weeks after this huge loss, his grieving father, probably with no idea what better to do with his small son, sent him to the English boarding school his brother already attended, an establishment which unfortunately was run by a sadistic headmaster who might have come straight out of Dickens. No one can mistake the emotion with which Lewis paints himself and his fellow pupils as ‘pale, quivering, tear-stained, obsequious slaves’. No wonder he never had a good word to say about schools in the Narnia series. He couldn't tell his father, partly because children often don't know how, but also because their relationship had suffered and, as he himself acknowledged, never really recovered, even after he was allowed to leave school to study with a tutor who recognised and encouraged his potential. Perhaps it's significant that (Aslan aside), Prince Caspian's tutor Dr Cornelius is the one Narnian father-figure whom Lewis depicts as entirely laudable.

Surprised By Joy was published in 1955, the same year as The Magician’s Nephew - the book in which he relives, re-writes, re-imagines the events of his mother's death and gives them the miraculously happy ending he’d longed for as a child. It's clear that the painful series of events surrounding his mother's death remained vivid in Lewis’s memory.

For there are many other boys in the Narnia stories whose mothers have died. Shasta is separated from his mother when he is kidnapped as a baby, but she then dies long before he can be reunited with her. And there is no particular narrative reason why this should be so. It just is – perhaps Lewis couldn't visualise such a reunion. Caspian’s parents are both already dead when we first meet him as a little boy: his father murdered by Miraz and his mother (perhaps) dying naturally, and earlier. Youthful Prince Rilian of The Silver Chair loses his mother – Ramandu’s daughter and Caspian’s Queen – when she is stung to death by a poisonous green serpent. This serpent is the Green Witch, who compounds her wickedness by enchanting and imprisoning Rilian: he loses ten years of his life with her and is reunited with his father Caspian only on the old king's deathbed.

Much of this post has been inspired by a letter I recently received from a gentleman in Hertfordshire who has pointed out something I hadn't noticed, near the end of The Last Battle. It comes after Peter has shut and locked the Stable Door and ‘Narnia is no more’. Lucy is in tears, but Peter chides her: ‘What, Lucy! You’re not crying? With Aslan ahead, and all of us here?’ Tirian replies for her: ‘Sirs, the Ladies do well to weep. See, I do so myself, I have seen my mother’s death. ...It were no virtue, but great discourtesy, if we did not mourn.’

My correspondent goes on to say:

‘I have seen my mother’s death.’ Narnia began with Digory seeking something to prevent his mother’s death. The tree grown from the Narnian apple that does so provides wood for the wardrobe that is the first way into Narnia. The death of Rilian’s mother is the spring for the story of The Silver Chair, and now Narnia is mourned by Tirian as his dead mother. The cycle is complete. One might say that all his life Lewis was looking for his mother, though I don’t place too much stress on that. But certainly, to me Narnia has the air of a land of lost content.

So it is that Narnia, the beloved land that has nurtured him, is mourned by Tirian as deeply as if she were his dead mother. I find this and its implications very touching.  One of the lovely things since the publication of Spare Oom at the beginning of May has been the conversations it’s provoked, both on and off line. There is always something more to say about Narnia. 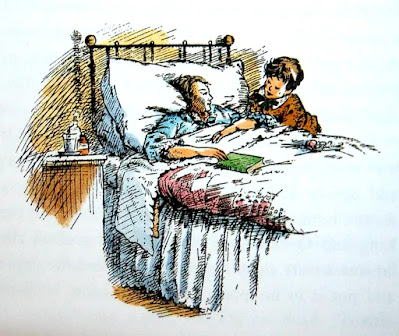 You can find my book, "From Spare Oom to War Drobe: Travels in Narnia with my nine year-old self"  at Hive.co.uk, at Amazon.co.uk, and from all good bookshops.

All the illustrations in this post are of course by the wondeful Pauline Baynes.

Posted by Katherine Langrish at 01:35 6 comments: