The 'man in the oke' and others 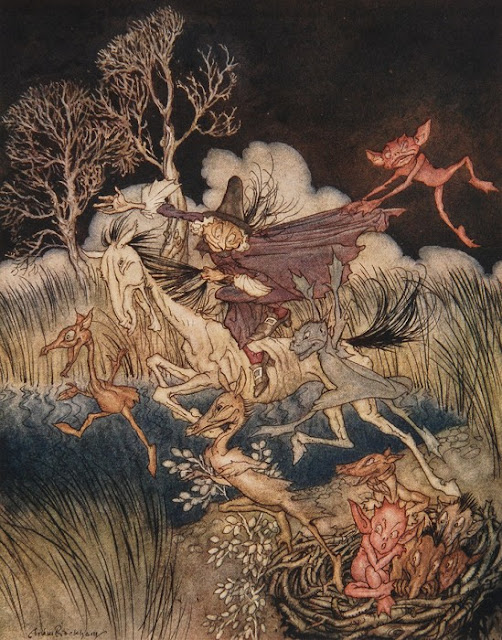 I love lists, especially lists of mysterious creatures like the oft-quoted one by Reginald Scot in his book debunking witches, The Discoverie of Witchcraft (1584), in which he takes the robust and sceptical line that even if witches, ghosts and fairies might exist, most actual instances are a load of old rubbish. ‘One knave in a white sheete hath cousened and abused many’ he declares; ‘Miracles are knaveries, most commonly’. In Chapter XV comes his famous, breathlessly delivered list of supernatural creatures fit to be believed in only by those who ‘through weaknesse of mind and bodie, are shaken with vain dreames and continuall feare’:


But in our childhood our mothers’ maids have so terrified us … with bull beggars, spirits, witches, urchens, elves, hags, fairies, satyrs, pans, faunes, sylens, Kit with the cansticke, tritons, centaurs, dwarfes, giants, imps, calcars, conjurors, nymphes, changelings, Incubus, Robin good-fellowe, the spoorne, the mare, the man in the oke, the hell waine, the fierdrake, the puckle, Tom thombe, hob gobblin, Tom tumbler, boneles, and such other bugs, that we are afraid of our owne shadows: in so much as some never fear the divell but on a darke night; and then a polled sheep is a perilous beast and manie times is taken for oure father’s soul, specialie in a churchyard…

This may or may not be a true indication of the range of creatures the Elizabethan populace actually believed in (satyrs, fauns, nymphs? Really?) but it’s a magnificent rant. It’s as though Scot has thrown together every single supernatural entity he can possibly think of: you can see how one suggests another. The classical ‘satyrs, pans, fauns, syl[v]ans’ run together easily, while ‘Robin good-fellowe, the spoorne, the mare, the man in the oke, the hell waine’ seem more homely night terrors. While many of them are still familiar, others are not. Bull beggars? Spoornes, calcars? What on earth are they? 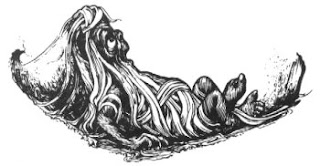 In her Dictionary of Fairies Katharine Briggs says there is or was a ‘Bullbeggar Lane’ in Surrey which ‘once contained a barn haunted by a bull beggar’. It is probably some variant of bogeyman. ‘Kit with the Canstick’ or ‘candlestick’ may be a variety of will o’ the wisp, leading travellers astray, but there are no folktales about it and if I were writing one I might be tempted to turn it into a domestic spirit, and a sinister one at that. What is a ‘calcar’? I’ve no idea, unless it could by some stretch be a corruption of the Gaelic ‘Cailleach’ – divine hag or old woman. What ‘the spoorne’ might be, no one knows. (Spawn?) The ‘mare’ is the night-mare. The hell-waine is the Devil’s wagon in which he carries souls to hell. In my children's fantasy 'Dark Angels' there's a  hill called Devil's Edge, loosely based on Stiperstones in Shropshire (and pictured at the top of this blog); it has earned its name because:

Up on the very top ... there was a road.  A road leading nowhere, a road no one used. For if anyone was so bold as to walk along it, especially at night, he’d hear the clamour of hounds and the blowing of horns, the cracking of whips and the rumbling of a cart.  And out of the dark would burst the Devil’s own dog pack, dashing beside a black wagon drawn by goats with fiery eyes, crammed full of screaming souls bound for the pits of Hell.


As for the ‘man in the oke’, Katherine Briggs tells of '…scattered reference to oakmen in the North of England, though very few folktales about them…. Most people know the rhyming proverb “Fairy folks live in old oaks”; the Gospel Oak or King’s Oak in every considerable forest had probably a traditional sacredness from unremembered times, and an oak coppice in which the young saplings had sprung from the stumps of unfelled trees was thought to be an uncanny place after sunset…'

There was a huge and ancient Chêne Jupitre or ‘Jupiter Oak’ in the Forest of Fontainebleau when I lived near there in the 1990’s, but it died and was taken down. It’s hard to see how anyone could be frightened by the dimunitive Tom Thumb whom we know of from the fairy tales, but perhaps in the 16th century he was more of a plaguey fairy nuisance like Puck. At any rate his name seems to have suggested ‘Tom Tumbler’ of whom we know nothing.

I’m sure this list (which of course he knew) was behind the list of evil creatures which CS Lewis names in The Lion, The Witch and The Wardrobe, who gather behind the White Witch at the Stone Table to kill Aslan:


Ogres with monstrous teeth, and wolves, and bull-headed men; spirits of evil trees and poisonous plants; and other creatures whom I won’t describe because if I did the grown-ups would probably not let you read this book – Cruels and Hags and Incubuses, Wraiths, Horror, Efreets, Sprites, Orknies, Wooses and Ettins. 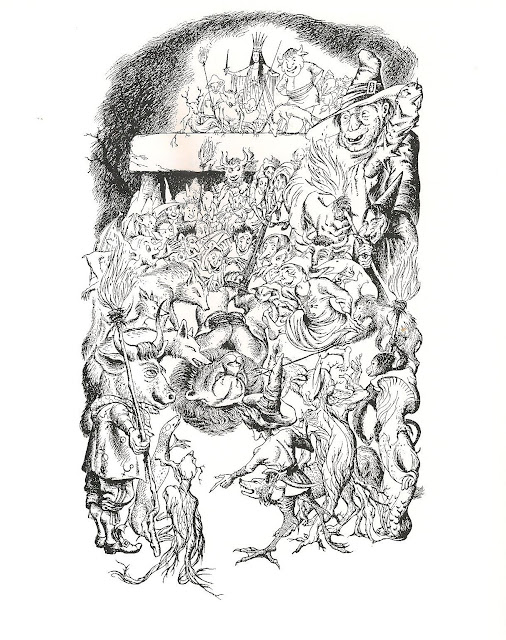 Still more exuberant is a list of supernatural creatures compiled by Michael Aislabie Denham (died 1859) a well-read Yorkshire merchant who collected and published various ‘Rhymes, Proverbs, Sayings, Prophecies, Slogans, etc.’ as well as pamphlets and anecdotes. Denham goes even further than Reginald Scot, whose list is incorporated – one might almost say buried – in the midst of his own: many of the creatures he names here appear nowhere else, but one must assume that they were once genuine traditions. Some are ancient. 'Portunes', for example, are to be found only in a single instance in the De Nugis Curialium or Courtly Trifles of 12th century man-of-letters Walter Map, who describes them as tiny fairy creatures like little old men who toast frogs in the hearth-ashes at night. It's highly unlikely Denham found any live oral tradition about them in the mid-19th century, and there's little chance of the name leaking back from the written to the oral tradition, as Map's Latin text was not published till 1850, nor translated into English until MR James's edition of 1914. So Denham is certainly overstating the case when he suggests that 'portunes', at least, were generally believed in ‘seventy or eighty years ago’. At this time, he claims,

You will have noticed the 'hobbits', about two-thirds of the way through?  All I can say is that here, indeed, is scope for the creative imagination. 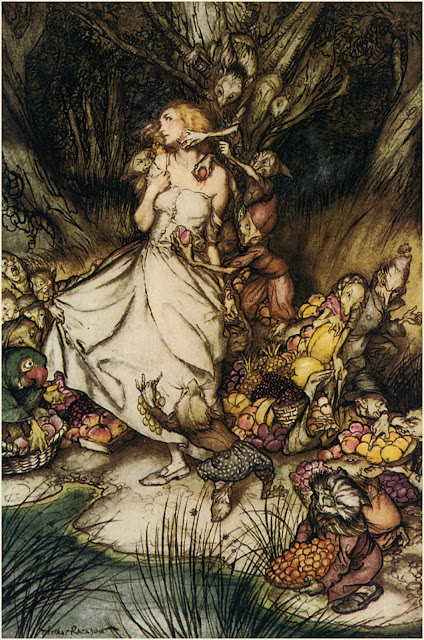 Posted by Katherine Langrish at 00:53 3 comments: