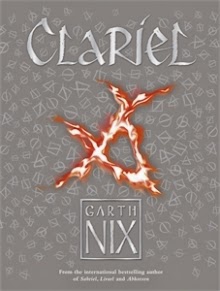 So here it is, the long-awaited prequel to Garth Nix’s fabulously successful Old Kingdom series, and from the opening pages in which an old beachcomber finds a bottle of thick green glass, with a silver stopper ‘secured to the neck with bright wires still yellow and warm’ - it doesn’t disappoint. While you’re still yelling ‘Don’t open the bottle!’ - you should never open the bottle - a Free Magic power is unleashed into the city of Belisaere.

Set six centuries earlier than Sabriel, Clariel shows Old Kingdom society on the brink of catastrophe, fiddling while Rome burns: complacent, degenerate and unmindful of danger. Even the King and the Abhorsen neglect their duties, leaving the city of Belisaere in the grasping hands of scheming Guildmaster Kilp. Into this potent mix enters seventeen year-old Clariel, descendent of both the royal line and the Abhorsens.

Garth Nix is particularly good at writing about women as people. His heroines know their own minds, they have important stuff to do: and there’s not a love-triangle in sight. Sabriel is cool-headed and brave; Lirael self-doubting and timid, but ultimately equally determined. Clariel is a strong-willed, impatient young woman who feels trapped and unhappy in the city to which her parents have brought her. Her father is devoted to supporting the career of her mother Jaciel, an uncompromising artist and brilliant goldsmith. Neither parent takes time really to understand their problematic daughter, and they use her as leverage to further Jaciel’s ambitions – yet the unacknowledged strength of the family bond becomes a trigger for cataclysm in one of the most striking and emotionally charged scenes of the book.

Clariel longs for a life of solitary freedom in the forest, but this simple ambition leads to conflict and danger. Hampered by ignorance – of the Charter, of her family history, and of her own weaknesses and strengths – she acts for the best, but her judgement is far from reliable. Untutored in Charter Magic, she can draw upon her own inherited ability of running berserk - a frighteningly unstable power. Clariel is a fascinating but flawed character in an unforgiving world.

Let me finally say that Garth Nix is just unparallelled at creating magical/alien creatures. (The only other writer I can think of who’s anything like as good is Larry Niven.) Fans of the series will be thrilled to encounter new Free Magic entities (and even perhaps an old friend). Filled with magic, politics, rebellions, plots and surprises, Clariel is a hugely enjoyable book and one I know I'll re-read. I loved it and so will you.


CLARIEL by Garth Nix is published in the UK by Hot Key, October 2

Garth will be touring the UK from 28th September.  Details: http://www.oldkingdombooks.com/garth-nix-in-the-uk/
Posted by Katherine Langrish at 01:45 4 comments: