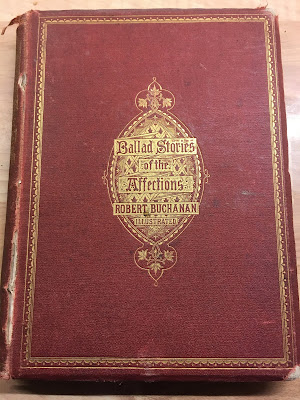 I have a very old book of Scandinavian ballads, ‘Ballad Stories of the Affections’, edited and translated by Robert Buchanan. There’s no date of publication, but in  Christmas 1887 (or 1881?) the book’s first owner, one GA Williams of ‘Spring Villa, Hanwell’, wrote his name and the date on the inside cover. I rather like the blue and gold book plate, too - although as it seems to say 'IG - his book', it may have been pasted in by a subsequent owner. 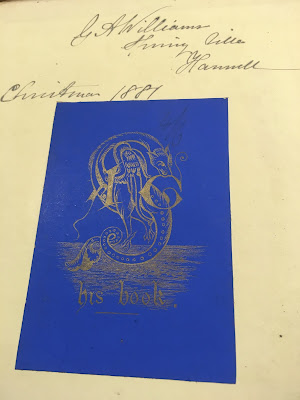 The ballads ‘emanate’, as Buchanan says in his introduction, ‘from the storm-tost shores of Denmark and the wild realm of the eternal snow and midnight sun … where the Ocean Sprite flashes, icy-bearded, through the rack and cloud of the storm.

‘Nothing can be finer’ (he goes on) ‘than the stories they contain, or more dramatic than the situations these stories entail; but no attempt is made to polish the expression or refine the imagery. They give one an impression of intense earnestness… That the teller believes heart and soul in the tale he is going to tell, is again and again proved by his dashing at once into the catastrophe –

‘It was the young Herr Haagen,
He lost his sweet young life!’

And all because he would not listen to the warnings of a mermaid, but deliberately cut her head off.’

Hagen is a character from the Nibelungenlied (and indeed fromWagner's Ring cycle). In the former, he steals the clothes of three nixies or waterspirits as they bathe in the Danube, but his cutting off a water-maid's head must be a later piece of folklore and – annoyingly – Buchanan does not include it here. However, I thought you would enjoy reading some of these ballads and I’ll be choosing a few to show you. They all have refrains, which if the ballads were sung would probably be repeated in every verse: you can imagine how the repetition multiplies the fatalism, the sense of gathering doom.

Here then is ‘The Two Sisters’. It tells how the daughters of a wronged knight take revenge on his murderer – whose thick-skinned bonhomie and sense of entitlement somehow reminds me of Boris Johnson, I can't think why.

Through the 19th century diction you can see quite well what Robert Buchanan means about ‘intense earnestness’. He adds that ‘the adventurous nature burns fierce as fire and the heroes sweep hither and thither, bright as the sword-flash.’  I’ll go with that.

At the foot of the ballad you'll find an illustration of the young women arming themselves and cutting off their hair. Éowyn and these two shieldmaidens share a similar heritage!

One sister to the other spake,
The summer comes, the summer goes!
‘Wilt thou, my sister, a husband take?’
On the grave of my father the green grass grows!

‘Man shall never marry me
Till our father’s death avenged be.’

‘How may such revenge be planned? –
We are maids, and have neither mail nor brand.’

‘Rich farmers dwell along the dale;
They will lend us brands and shirts of mail.’

They doff their garb from head to heel;
Their white skins slip into skins of steel.

Slim and tall, with downcast eyes,
They blush as they fasten swords to their thighs.

Their armour in the sunshine glares
As forth they ride on jet-black mares.

‘Hail, Dame Erland!’ the sisters say;
‘And is Herr Erland within today?’

‘Herr Erland is within indeed;
With his guest he drinks the wine and mead.’

The maidens in the chamber stand;
Herr Erland rises with cup in hand.

‘We have ridden many a mile,
We are weary and would rest a while.’

‘Oh tell me, have ye wives at home?
Or are ye gallants that roving roam?’

‘Nor wives nor bairns have we at home,
But we are gallants that roving roam.’

‘Then, by our Lady, ye shall try
Two bonnie maidens that dwell hard by –

‘Two maidens with neither mother nor sire
But bosoms of down and eyes of fire.’

‘If they indeed so beauteous be,
Why have they not been ta’en by thee?’

Herr Erland shrugged his shoulders up
Laughed, and drank of a brimming cup.

‘Now, by our Lady, they were won
Were it not for a deed already done;

‘I sought their mother to lure away,
And afterwards did their father slay!’

Then up they leap, those maidens fair;
Their swords are whistling in the air.

‘This for tempting our mother dear!’
Their red swords whirl, and he shrieks in fear.

‘This for the death of our father brave!’
Their red swords smoke with the blood of the knave.

They have hacked him into pieces, small
As the yellow leaves that in autumn fall.

Then stalk they forth, and forth they fare;
They ride to a kirk and kneel in prayer.

Fridays three they in penance pray;
The summer comes, the summer goes!
They are shriven, and cast their swords away.
On the grave of my father the green grass grows! 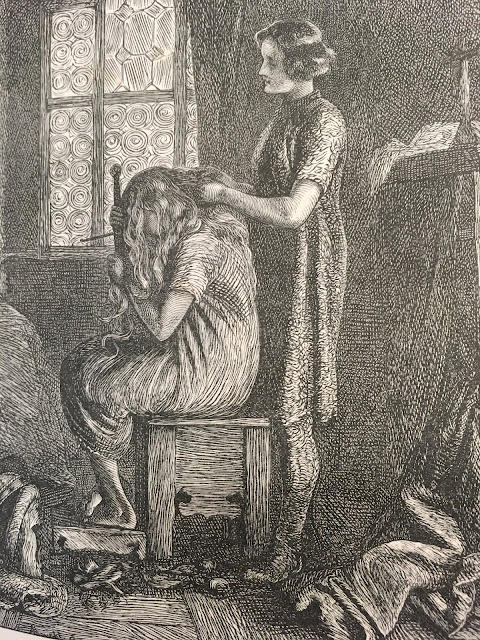 Posted by Katherine Langrish at 01:06 3 comments: