The Economy of Mordor 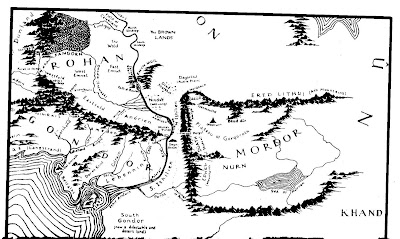 For nefarious reasons connected with my next book, I’ve been investigating towers, and as one thing leads to another and fictional towers tend to carry the mind to Dark Towers, I found myself – and not for the first time – considering the economy of Mordor. You could hardly complain about the amount of creative thought and background research that JRR Tolkien put into creating the world of Middle-Earth, but he was undeniably stronger on history and languages than he was on geography and economics.
A look at the map is instructive.  Mordor is a landlocked country, surrounded on three sides by suspiciously straight lines of mountains.  In the north-west is the Plateau of Gorgoroth, perhaps volcanic; doubtless dry and cold, for no rivers run from it.  To the south-east is the low-lying and bitter .  No navigable rivers flow out of Mordor, though the River Harnen has its source just beyond the southern border.  The Great River Anduin curves provocatively close to Mordor’s western frontier, but there appear to be only two passes through the Ephel Duath: Minas Morgul represents one; the Morannon or ‘Black Gate’ the other.
Trade-routes to the west, therefore, are few and far between.  To the east Mordor lies open, but although we sometimes hear of ‘Easterlings’or ‘Wainriders’ – enemies of Gondor – they are characterised as wild nomadic tribesmen, unlikely sources of supplies.  is marked on the map as ‘a debatable or desert land’, and Near Harad, Haradwaith and Khand appear utterly devoid of forests, rivers, cities or hills.  It’s a complete puzzle how the ‘Southrons’ who ally themselves with Mordor find the resources to muster their vast armies mounted on oliphaunts.
Mordor itself is an ecologist’s nightmare: a wasteland of slag and ash, scored with gaping fissures and rocky ridges, governed by an evil all-seeing Eye on the top of a vast not too far from an active volcano which pours out ever more ash and smoke.  Nothing grows.  There’s hardly any rain, and any trickle of water running through the polluted land swiftly becomes poisoned.
In the course of rescuing Frodo from the , Sam raises a question that suggests Tolkien may have experienced a slight frisson of doubt about the non-availability of food in Mordor.  ‘Don’t orcs eat, and don’t they drink?  Or do they just live on foul air and poison?’  Frodo assures Sam that on the contrary, orcs do eat:  ‘Foul waters and foul meats they’ll take, if they can get no better, but not poison.’
Armies, as we know, march on their stomachs.  I can see that an enormous fiery Eye isn’t going to care that in all his wide lands there’s not a bite to eat; and the Nine Ringwraiths probably don’t mind much either.  But the orcs?  How do they benefit from serving Sauron?  And Frodo watches whole armies marching into Mordor via the northern Black Gate:  ‘men of other race, out of the wide Eastlands, gathering to the summons of their Overlord.’   What on Middle-earth are they thinking of?  What can they expect to gain from rallying to the aid of a Dark Lord who rules a bankrupt country with no agriculture, no exports or imports and no internal food supplies?  There isn’t even the prospect of future riches if Gondor falls to Sauron – for in that case Gondor itself will become a similar wasteland.
In any normal world economy, Mordor would be over its ears in debt.  Refugees – orcs, Easterlings and Southrons – would be streaming westwards in the hope of better lives for themselves in Gondor.  Rather than closing its gates against an invading army, Minas Tirith would be coping with an influx of immigrants.  The tough and hardy orcs would hire themselves out as cheap labour in exchange for a few coppers and a square meal.  Mounted bands of Rohirrim would patrol the borders of Rohan to turn away fugitives.  Dark Lord or no Dark Lord, Sauron would have no choice but to borrow money from the coffers of Minas Tirith – or from the metal-rich dwarfs – in order to keep Mordor from emptying itself.  The power is with the purse strings.
Still, The Lord of the Rings is not a political satire.  Perhaps we can be grateful that Tolkien didn’t look too closely at the economy of Mordor.  Middle-earth is a polarised world.  The brave, the beautiful and the good are all grouped together on one side, while the wicked, the ugly and the cruel gravitate together on the other. So let’s hear it for the all-powerful Dark Lord, Ruler of the Wastelands, Commander of Ringwraiths, Leader of the Axis of Evil.
So long as we remember he doesn’t exist.
Posted by Katherine Langrish at 07:51