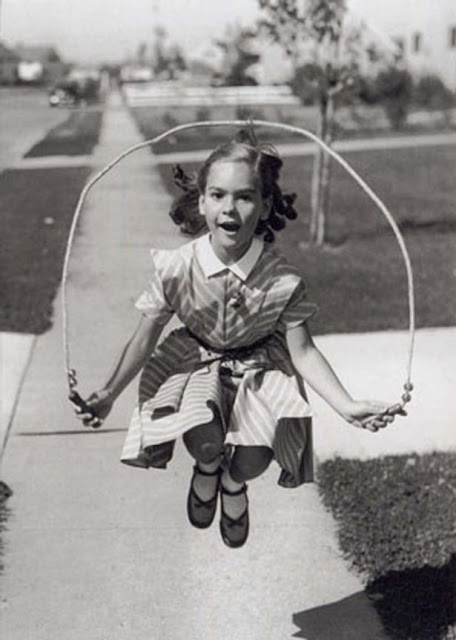 A week or so ago I was in a pub garden watching a little boy of about three trying to play Aunt Sally - a game rather like skittles which is popular in our bit of Oxfordshire. He was having difficulty, but eventually succeeded in hurling the heavy wooden baton (which is used instead of a ball) down the alley at the Sally, which is a single white skittle, and knocked her down. In great delight he went running back to his family chanting, ‘Easy peazy lemon squeezy, easy peazy lemon squeezy!’

I was smiling and thinking to myself how much young children love rhymes and rhythms and word-play. Many of them, in junior school, are natural poets. You’d think it would be dead easy to make readers out of them. What happens to the simple joys of having fun with words?

Here’s a skipping or clapping rhyme my children used to chant at school. I'll show the stresses in the first few lines, but it would be a bit much to do the whole thing. Come down heavily on the italicized words and you'll get it:

My mother, your mother, lives across the street.
Eighteen, nineteen, Mulberry Street –
Every night they have a fight and this is what it sounded like:
Girls are sexy, made out of Pepsi
Boys are rotten, made out of cotton
Girls go to college to get more knowledge
Boys go to Jupiter to get more stupider
Criss, cross, apple sauce,
WE HATE BOYS!

Chanted rapidly aloud, you can feel how infectious it is. Another one, which is also a clapping game, runs:

I went to the Chinese chip-shop
To buy a loaf of bread, bread, bread,
They wrapped it up in a five pound note
And this is what they said, said, said:
My… name… is…
Elvis Presley
Girls are sexy
Sitting on the back seat
Drinking Pepsi
Had a baby
Named it Daisy
Had a twin
Put it in the bin
Wrapped it in -
Do me a favour and –
PUSH OFF!

I suppose every junior school in the country has a version: chanted rapidly and punctuated with a flying, staccato pattern of handclaps, it’s extremely satisfying. I've heard teachers in schools get children to clap out the rhythms of poems 'so that they can hear it' - but never anything as complicated as these handclapping games children make up for themselves. No adults are involved. What unsung, anonymous geniuses between 8 and 12 invented these rhymes and sent them spinning around the world? Nobody analyses them, construes them, sets them as texts, or makes children learn them. They’re for fun. Nothing but fun.

Long time ago, when I was at school, poetry anthologies for children included a lot of 'serious' poetry.  In fact, we were expected to learn lots of it by heart - which incidentally is great for training the memory.  I loved doing it, and got my own daughters to do the same when they too were little, by the simple expedient of pinning a poem to the fridge each Monday and - no compulsion - offering them a dollar (we were living in the US at the time) if they could repeat it by Friday. I have nothing but admiration for Shel Silverstein, and the many other modern poets (like our own Michael Rosen) who write poetry specifically for children: all the same, it seems a shame that kids don't still get some of the oldies we were treated to. (Or do they?)  I'm talking about stuff like:

The Assyrian came down like the wolf on the fold
And his cohorts were gleaming with purple and gold:
And the sheen of his spears was like stars on the sea
Where the blue wave rolls nightly on deep Galilee...

...which, believe you me, if you chant it sufficiently loud, will send shivers running right down your spine.  This was a huge success with me and my friends aged about eleven.  As was:

The splendour falls on castle walls
And windy turrets old in story...

It may be that the gulfs will wash us down.
It may be we shall touch the Happy Isles
And see the great Achilles, whom we knew...


For children really can love the rhythms and richness of poetry - if they get to hear it young enough.  Keats once said, ‘If poetry does not come as naturally as the leaves to the tree, it had better not come at all,' and to children, rhythm does come naturally.  I don’t believe there’s any essential difference between the contrapuntal patter of playground clapping games and the sonorous rhythms of:

Do not go gentle into that good night.
Old age should rave and rage at close of day.
Rage, rage against the dying of the light –

which I once declaimed theatrically in the living room to my ten year old nephew. He looked up startled.

Posted by Katherine Langrish at 14:42