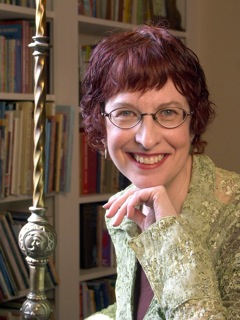 Delia Sherman is so well known and so active in the US and international fantasy community that she hardly needs any introduction, but I'm doing one anyway because I want to tell you how much I love her books.  And so here it is:  Delia writes historical/folklore/semi-comic fairy stories with a serious twist.  Her short fiction and poetry has appeared in many anthologies.  Her adult novels are 'Through a Brazen Mirror' and 'The Porcelain Dove' (which won the Mythopoeic Award) and, with fellow-fantasist Ellen Kushner, 'The Fall of Kings'.  She has also written two wonderful novels for younger children, 'Changeling' and 'The Magic Mirror of the Mermaid Queen', featuring adventurous, impetuous, warm-hearted Neef, the official changeling of , who is always getting into scrapes.
I first met Neef in a story called ‘CATNYP’, in one of Terri Windling and Ellen Datlow’s wonderful anthologies of short stories, “The Faery Reel”.  I was entranced, and rushed out to find the full length novels.  As a changeling child, Neef is ‘kind of bi-cultural, human and fairy’, and her adventures take place in :
Not the one in the ‘I ♥ ’ posters, but the one that exists beside it, in the walls and crawlspaces and all the little pockets and passages of its infrastructure.  Call it Between.
You always knew that such a place must exist, right?  And naturally the fairy folk who have arrived over the centuries and now inhabit New York Between are diverse, dangerous and dynamic.  Expect to hear the Wild Hunt howling on autumn nights in , to meet fox spirits and moss women in the woods, and to encounter the odd Fictional Character such as the Water Rat or Stuart Little down by the lake.  Neef has an unpredictable Pooka for a fairy godfather, and a motherly white rat for a fairy godmother. There are mermaids in the harbor, a Dragon on Wall Street, while as for the Green Lady:
When she’s happy, the Green Lady of is as beautiful as the most beautiful thing you can imagine.  She has greeny-brown skin, long dark-green ropes of hair, and deep-set eyes the color of new leaves after rain.  But she can change shape, and not all of her shapes are beautiful.
As soon as she saw me, her dreadlocks lifted and began to weave around her head and hiss like snakes.  Emerald fire smoldered in her eyes and her lips lifted over teeth grown suddenly needlelike.
“Can the music, boys,” she yelled.  “We have a situation here.”
I love the fun in these books, spiced with danger.  I love the wild but utterly convincing mix of characters and the sense of place - the spirit of itself.  (Naturally there will be real swan maidens backstage at the ballet in the .)  They belong in that long pageant of impressively good children’s books in which New York City plays its part - ‘Roller Skates’, ‘The Cricket in Times  Square’, ‘Harriet the Spy’, and ‘From the Mixed-Up Files of Mrs Basil E. Frankweiler’.  Delia is an active member of the Endicott Studio of Mythic Arts and a founding member of the board of the Interstitial Arts Foundation, dedicated to art found  in between genres and crossing boundaries.  She lives – where else? – in New York City with Ellen Kushner, travels whenever she gets the chance and writes wherever she happens to be.  And her fairytale reflection is  -
THE SNOW CHILD 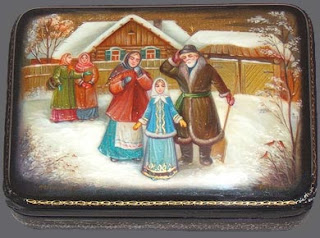