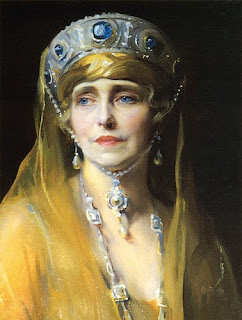 A couple of weeks ago Heidi, at SurLaLune, was kind enough to suggest that I might be able to recruit Jane Austen or Charlotte Bronte to write me a post for Fairytale Reflections. I’m working on that. But today, Christmas Eve, seems to me the best of times to share with you a story.  A Christmas story.

But which one? The real Christmas story is all about the baby in the manger, and I don’t need to retell it here. ‘The Snow Queen’ and the ‘Snow Child’ have already been discussed here, and anyway they are really winter stories rather than Christmas tales. And ‘The Little Match Girl’ is too sad.

But there’s a story I came across in an old book many years ago which, with its Christian references, its piety, its poverty and its genuine moments of terror – even with its sentimentality – really does encapsulate something of the cruel winter darkness, and the necessary counter-blaze of light that we all feel the need for at this time of year (in the Northern hemisphere at least). It's a fantastic story to tell aloud.  It works for me – and it seems to have worked for the children to whom I’ve told it, over the years, at Christmas time.

It was written by the remarkable Queen Marie of Romania.  Allow me to introduce you!

Marie Alexandra Victoria, Princess of Edinburgh, was one of Queen Victoria's many grandchildren, born on the 29th of October (coincidentally my birthday too!), in 1875: the eldest daughter of the Queen's second son Prince Alfred, and his wife Grand Duchess Maria Alexandrovna of Russia. And so, little Princess Marie was just about as blue-blooded as she could possibly be.

In her teens, her first cousin the Prince of Wales (later King George V) fell in love with her and asked her to marry him - but although both fathers of the young couple were happy with the match, neither of their mothers approved. The Grand Duchess disliked the British royals, and the Prince’s mother, Alexandra of Denmark, did not like Germans, to whom Marie was related on both sides of her family. Such a dislike might seem odd, considering Alexandra’s royal husband was also of German descent - nevertheless, this lovely snarl of family prejudice got the match disapproved, and Marie was married off instead to Crown Prince Ferdinand of Romania - in some haste. She was seventeen and he was twenty-seven. 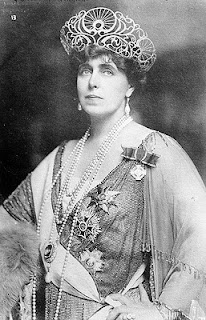 Well, the marriage was unhappy, but Marie was not a young woman to put up and shut up.  You can see her strength of character in photos and portraits (look at that determined mouth!) She flung herself into a series of passionate affairs, and it’s likely that at least three of her six children were born to lovers rather than to her husband.  In 1899, pregnant with her daughter Mignon, Marie forced her father-in-law King Carol to allow her to give birth as she wished in her father’s dukedom of Coburg, by declaring to his face that the baby she carried was not his son's, but the child of a Russian duke. Her husband – a quiet fellow who probably had little say either in choosing his whirlwind of a bride – recognised the child as his own to avoid scandal.

In the darkly ominous year 1914, King Carol died, Ferdinand ascended the throne, and twenty-nine year old Marie became Queen of Romania. Her charismatic personality quite overshadowed her husband's, and she became the country’s de facto ruler. She threw herself into the war effort, devising strategic plans with her military advisors for the defence of Romania against the German army.  She enrolled as a Red Cross nurse.  She wrote a book about Romania: ‘My Country’, to raise funds. A long-term friend of the Astors and other American socialites, she also pulled strings to obtain vital loans from the US government.  And after the war, she made an appearance at the Paris Peace Conference to help secure Romanian territories. By now known as ‘the Soldier Queen’, she famously declared, ‘Romania needs a face, and I will be that face.’

On her husband’s death in 1927, Marie’s son Carol became King of Romania. She eventually took a back seat and remained in Romania, writing books and memoirs. She died in Peleş Castle in 1938.

And Marie could write.  I don’t know whether this story of hers is traditional, or whether she invented it, but I suspect it's a bit of both. Some of the elements, especially the terrifying, groaning well in the dark, icy forest, could easily be traditional, but clearly Marie has ‘written it up’ – and in my opinion she has done a pretty good job. A love of her adopted country shines through, and there are many sharply and sympathetically observed details of Romanian peasant life.

And since children like Petru still exist - and since this is Christmastime - and since Queen Marie's story is all about poor children, I hope you won’t mind me adding a link to a children’s charity that works across Eastern Europe: Hope and Homes for Children.

'Fairytale Reflections' will be back in January. In the meantime, please have the happiest of Christmasses and a wonderful New Year, and enjoy reading