"The Road Goes Ever On and On": The 'West of the Moon' blog tour 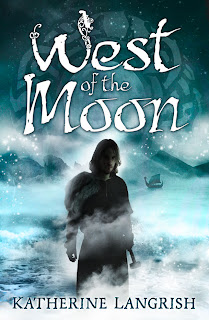 “This tale grew in the telling,” says J.R.R. Tolkien in the foreword to ‘The Lord of the Rings’, “until it became a history of the Great War of the Ring and included many glimpses of the yet more ancient history that preceded it.”

About a week from now, on March 3rd, my trilogy ‘West of the Moon’ is published. To celebrate, I’m setting off on a blog tour, and for the next few weeks I’ll be posting links almost every day, here on Steel Thistles, to the different stages on my journey: guest posts, reviews, interviews and giveaways.  I’ve tried not to repeat myself, I’m having a lot of fun talking about things I love (like fairytales and fantasy and monsters) and I'd be very happy if some of you feel like coming along with me.  My first stop will be on Monday at 'Reclusive Muse', the blog of my friend and fellow-fantasy writer Katherine Roberts, and you can see the full tour schedule at my home page.

‘West of the Moon’ has occupied, off and on, a large part of my life, so in this post I'm looking back at the other journey: the journey of writing the book: how it began, how it developed and where it has led me.

Maybe all tales grow in the telling, but this certainly was the case with ‘West of the Moon’. I began writing the first part, ‘Troll Fell’, in longhand some thirty years ago, created a few of the characters and part of the situation, and then got stuck.  The manuscript stayed in a drawer for a couple of decades while I earned my degree, found employment, married and had children – but I never threw it out.  It was a tantalising keyhole glimpse of a world that intrigued and enticed me.  I knew one day it would draw me back.

When this finally happened, it was after spending four or five years of storytelling to schoolchildren in France and America where we’d been living.  I’d submerged myself in the oral storytelling tradition, mostly fairytales: The Juniper Tree, Mr Fox, The White Cat, The Goosegirl, The White Bear – and learned much from them about plot, structure and what holds an audience. I’d also read widely in Scandinavian folklore and fairytales - which for me have a wider range than pure mythology.  These stories are often attractively humble and homely, encompassing humour and warmth, as in tales of Norwegian trolls which infest farmers’ barns like vermin, or come tumbling in, menacing yet comical, on Christmas Eve to gobble up the food and frighten the inhabitants.  Yet such stories can also be numinous and terrifying in a way that, for me, strikes closer to home than tales of ancient gods.  What about the story of ‘The Deacon of Myrká’, who arrives on Christmas Eve on his grey horse Faxi to take his sweetheart to the dance, just as he’d promised – even though, unbeknown to her, he was drowned in the river weeks ago? She gets up behind him, and:

“As they reached the river, the ice banks were quite high, and as the horse went over the edge, the deacon’s hat was lifted at the back and Gudrún looked at his bare skull.  At that very moment the clouds cleared from the moon and the deacon said,

“The moon is gliding.
Death is riding.
Don’t you see a white spot
at the nape of my neck,
Garún, Garún?”

‘Troll Fell’ was conceived as a fairytale which would combine the homely and the terrifying: the humour and cosiness of a tale told by the fireside, but with room for that shudder of real terror as something peers in from the darkness outside.  I hope I succeeded, though it’s not really for me to say: but that was my aim.  But as Tolkien says, tales grow in the telling, and by the time I came to the second book, ‘Troll Mill’, more was going on under the surface than at first I realised.

‘Troll Fell’ was a winter book; ‘Troll Mill’ is set in summer: but darker for all that.  The hero and heroine, Peer and Hilde, are older, coming of age, beginning to wrestle with the doubts and ambiguities of life.  I used the old Orkney legend of the selkie bride – the seal woman whose pelt is stolen by a fisherman so that she must marry him. The fisherman loves his wife, but he captured her like an animal. So how can he be a good man?  The wife loves her child, but abandons it to return to the sea.  How can she be a good mother?  I found myself writing variations on a theme of motherhood.  There’s the lost selkie bride, whose story seems to me a metaphor for the tragedy of post-natal depression; there’s the Norse mother who cares for her family with common sense and hard work; and there’s the celebrity mother with the appalling brat – the Troll Princess.  The book filled up with summer storms, love and death, quarrels and misunderstandings and good intentions that go awry.

And then I came to the third and final book of the trilogy, ‘Troll Blood’, in which the hero and heroine set out in a Viking ship to sail across the North Atlantic and reach the coasts of Vinland – in this case, Nova Scotia and New Brunswick.  I’ve written elsewhere of my research for this book, so I won’t repeat it here.  This is an even darker book than ‘Troll Mill: it had to be.  The most cursory reading of the Greenland Saga shows that the interaction between the Norse would-be settlers and the original inhabitants of ‘Vinland’ was extremely violent, foreshadowing the whole sorry history of colonisation.  That shadow lay over my story.  It was impossible to write without delving into the fascination which violent power exerts over our imaginations.  What is a hero? Often, in real life, in the sagas, in history and in fiction, ‘he’ is a handsome figure wielding a famous sword...  In ‘Troll Blood’, young Harald Silkenhair is the very model of that kind of hero.  He is a charismatic psychopath who leaves a trail of death and destruction, and who is all the harder to deal with because other men can’t help admiring him.

So yes, my tale grew in the telling.  Perhaps you couldn’t predict the ending of ‘West of the Moon’ from the beginning, any more than you could predict ‘The Lord of the Rings’ from ‘The Hobbit’: but the seeds are there.  As Tolkien went on to say about it,

“It was begun soon after The Hobbit was written… but the story was drawn irresistibly towards the older world…  As [it] grew, it put down roots (into the past) and threw out unexpected branches.”

Although ‘West of the Moon’ is full of magical, legendary creatures – some of them monsters – it’s my firm belief that the real monsters are always human beings.  Fictional monsters, in folklore and legends, are metaphors for the darkness in ourselves, which is where fantasy ought to take us.  And then it should take us out the other side and give us hope: because I also firmly believe in the heroism of perfectly ordinary people.  We saw them stand up, empty-handed, to police and soldiers armed with tanks and guns and teargas, a few weeks ago in Tahrir Square.

And they prevailed.
Posted by Katherine Langrish at 01:10