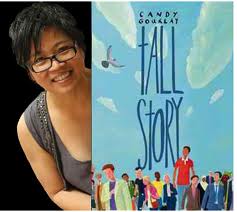 Candy Gourlay was a young journalist writing for the opposition during the dictatorship of Ferdinand Marcos in the Philippines.  After the revolution that toppled Marcos, she moved to London with her English husband and, as she says, 'attended to dictators of the nappy-clad variety before trying my hand at children's fiction.'

Her debut novel, 'Tall Story',  published in 2010, is the story of two children.  Andi lives in London, and she has two big wishes.  Mum and Dad simply don't realise how important it is - but Andi is desperate to play on the basketball team of her new school.  She may be small, but she's good and she knows it.  But guess what? They only take boys.

Andi's other big wish is that her sixteen year old half-brother, Bernardo Hipolito, could come and live with them.  Although she can hardly remember him, she would love to be his little sister - if only the Foreign Office would grant him a visa.  And finally, after years of waiting, this wish comes true.  As Bernardo's plane arrives from the Philippines, Andi hopes he'll turn out to be tall and just as mad as she is about basketball.  And Bernardo turns out to be tall, all right. But he's not just tall ... he's a GIANT.

Candy's story isn't only a tender and touching tale of clashing expectations and cultural differences.  Woven into the narrative are many of the folktales and fairytales of the Philippines. Brought up by his uncle and aunt in the tiny mountain village of San Andres, Bernardo is named after a local folklore hero, the giant Bernardo Carpio, who was big enough to plough fields with his comb and carve mountains with his fingers.  One day, when an earthquake split the land open, Bernardo Carpio jumped into the fissure and braced his arms to prevent the two walls of rock from colliding. The earth swallowed him, but the village was saved.

That was long ago, but in this earthquake-prone area, earth tremors are a continuous hazard, and the village of San Andres gets into the World Records Website as 'the Land of Rock and Roll' with seismographs registering hundreds of tremors a day.

Superstition and fear rule the village in the person of Mad Nena, the village witch and her daughter Gabriela.  It's the sort of place where, though people may be kind, they are also ignorant.  And they are poor: and medicine is expensive.  A case of rabies is treated with charms, and young Bernardo is allowed to grow taller and taller without ever being taken to a doctor: because


... imagine what a big deal it was when people discovered a boy amongst them named Bernardo who was shooting up like a giant bamboo.

And imagine what they thought when, as the boy grew, the rock and roll dwindled to a full stop.


And then imagine how they would feel if they knew their saviour was about to leave them to their fate.

Tall Story  has been shortlisted for eleven children’s book prizes including the Waterstone’s, the Branford Boase and the Blue Peter prize. It won the Crystal Kite Children’s Book Prize for Europe.  Her next book, 'Shine', will be published in 2012...

Now I'm a big fan of oral storytelling as well as the written down variety.  So here is Candy, a woman of many talents, with some tantalizing glimpses of stories from the land of her birth - and one in particular:

The Legend of the Pineapple


Are there such things as fairy tales in the Philippines where I grew up?


If a fairy tale requires a fairy, then no - we don't have wand-wielding, tutu-wearing creatures in our woods (I would say rain forests, except most of those have been chopped down).


I thought the best way to reflect on this subject was to do my own re-telling of a Filipino sort of fairy tale ... so here is my video re-telling of The Legend of the Pineapple, an old Filipino story.


I made the video with the help of my young neighbours, Christiane and Jacob (Jacob very kindly agreed to be the voice of a little girl as long as I used his drawing of a jet plane - watch out for it!):


The Legend of the Pineapple from Candy Gourlay on Vimeo.

I grew up listening to stories like these told by my parents usually during the frequent evening power cuts that plagued my childhood in Manila. We would light candles and katol (an incense like mosquito repellent) and sit around the dining table telling stories until the power cuts were over.


The stories were always about everyday things - the turtle, that mountain we always drove past, that plant with leaves that folded when touched ... but unlike the happily ever afters of Western fairy tales, the endings always had a sadness to them.


A man turned arrogant and overbearing by his rapid success, turns into the shamefully slow turtle. (The Legend of the Turtle)

A young woman, abandoned by her lover, falls into an eternal sleep - and will forevermore be a mountain. (The Legend of Maria Makiling)

A painfully shy child trying to overcome her shyness ventures out only to be crushed by cruel strangers. She turns into the makahiya, a grass-like creeper whose leaves shrink away and fold when touched. (The Legend of the Makahiya)


Yes, there is magic but there is a helplessness in the face of greater, unstoppable powers in these stories. And inevitably it's not good magic, but bad.


The Philippines is a country always on alert for disaster - year after year, typhoons sweep in without fail, floods ruin crops, earthquakes, tsunamis, volcanoes ... living with constant catastrophe has invested the culture with a diffidence - bahala na ("Let it be" or "God wills it") is a common expression. Catholicism (we are the only Catholic country in Asia) exacerbates this fatalism.


Here's a video reflection I made about the 2009 deluge in the Philippines: (you don't have to watch the whole thing)


The odd thing is when I was a child, I don't think I regarded these magical stories as fairy tales. With disaster so much a part of the fabric of life, they just seemed too real to be fairy stories.


I found my old school primer the other day from when I was seven years old.

Now I didn't question the provenance of these stories or the other stories I read in books - the ones about Cinderellas, witches, evil stepmothers and the like.


There wasn't a lot of publishing (and very few books for children) in the Philippines at the time. Most books were imported from America and Britain.

The world of reading, for me, was about somewhere else. In those books, nowhere looked like home, and nobody looked like me  - not even in one of my favourite picture books, The Five Chinese Brothers!

It was all fantasy. Everything I read was a fairy tale.


It was only when I came to live here in Europe that I discovered there really were castles and hundred acre woods and foxes and kings and twisty-turny cobbled alleys and Black Forests. It takes a big leap for me to think that those fairy tales I read as a child were based on real places and possibly real people.


Huh. So those storytellers of long ago were writing about themselves.


And perhaps their readers were thinking: these stories are too close to the bone to be fairy tales.


Posted by Katherine Langrish at 00:57