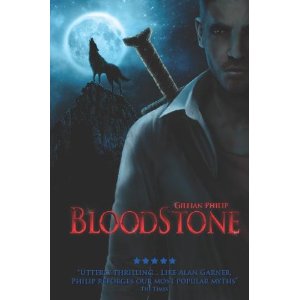 Gillian Philip’s first YA fantasy, ‘Firebrand’, was one of the best books I read last year. I talked about it in my introduction to Gillian's Fairytale Reflection on Tam Lin.  Set in the 16th century at a time of witch hunts and burnings, it followed the fortunes of Seth MacGregor, feral prince of the Sithe, the Scots faeries, charismatic and difficult.  The Sithe are ruled by a cruel and devious queen, Kate NicNiven. There’s a protecting Veil between the land of the Sithe and the mortal world, and Kate wants to tear it away.  To do so, she invokes the help of some hauntingly unpleasant creatures called the Lammyr – stretching the loyalty of Seth and his beloved brother Conan almost to breaking point.  The book is dramatic, beautifully written, and rooted in the folk and faerie lore of Scotland.
Now here at last is the sequel (second in a series of four): ‘Bloodstone’.  And - surprising, yet the traditional penalty for those who spend time in Elfland – we find four hundred years have passed.  It was a brave move to place Seth and Conan in the 21st century, and it works.  Banished from their faerie homeland until they can find the mysterious Bloodstone, they have had to endure long centuries beyond the Veil – parted, except for the occasional illicit foray, from all they hold dear.  On one such brief mission, the death of a comrade leaves Seth and Conan guardians of his baby daughter Finn, who is brought up in the human world unaware of her Sithe blood.  Then Seth embarks on an ill-fated romance with a mortal woman, earning deep resentment from her young son, Jed.  And Kate is still scheming, and the Bloodstone is about to return…
“Bloodstone” is a complex, dramatic and rewarding book – always vivid and fast-moving, but with a lot going on.  Rather like her hero Seth, Gillian Philip expects readers to keep up.  If your attention does stray, it’s possible to get a little lost, but hey – it’s nice not to be treated like an imbecile.  It's also very nice to read a book about faeries in which the plot is not focussed on a romance between impossibly gorgeous doomed teenage lovers.
Four hundred years of exile have taken their toll on the characters.  Still sexy and sarcastic, Seth - dressed in jeans and T-shirt, mouth full of modern slang - has become harder, more difficult, more self-torturing.  Responsible Conan is loving and honourable, but also weary and explosive. Young Finn is angry too, and so is Jed – and as they all take it out on one another by turns, there are sometimes possibly a few too many warring temperaments.  Nevertheless the story swept me along like a river in spate. The first person narration is brilliantly characterised: as here in Seth’s description of young Finn:
“A surly little thing with pale protuberant eyes, she reminded me of a deep-water fish.  The older she grew, the more I tended to think of a Moray eel, lurking in darkness, shy and alone, hiding lethal teeth. And let me tell you, you haven’t felt native hatred till you’ve seen it in the eyes of a six-year-old.”
There are all sorts of mysteries lurking in the shadows.  I love the savage waterhorses which Conan and Seth both ride, and I love the Selkyr, the seal people, sinister and beautiful and wholly Other.  This passage on an abandoned moonlit beach had shivers running down my spine:
The black-bellied waves were fringed with phosphorescence, and against their light was a figure: too tall, too lanky to be Leonora, hunched into a long coat with an upturned collar.  The coat that was no coat moved and glistened like a wet pelt.  The creature wearing it turned, and I sucked in a cold salty breath.
And it just gets better.  I’m looking forward very much to the next in the series.  And in one of the best compliments I’ve ever been paid, Gillian has used a verse from my poem ‘Janet Speaks’ as the epigraph to the book:
Oh Queen of Fays -
If I had known of this day's deed -
I would have let your knight, Tam Lin
Ride down to Hell on his milk-white steed.

(You can find the whole poem on the new page in the tabs - and next week I'm beginning a new series.)
Posted by Katherine Langrish at 01:16