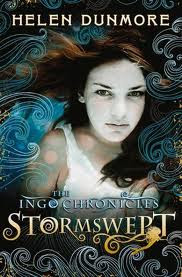 Mermaid season continues here on Steel Thistles with my review of “Stormswept”, a standalone title in Helen Dunmore’s distinguished series of children’s books about Ingo, the undersea land of the Mer.

Morveren and her twin sister Jenna live on an island off the Cornish coast, cut off from the land except for a single causeway exposed at low tide.  Like Holy Island (Lindisfarne) off the Northumberland coast, or St Michael’s Mount in Cornwall, or Mont St Michel off the coast of Brittany, such islands are special, numinous places – neither part of the mainland nor entirely parted from it; a kind of halfway gatehouse to the otherworld.

In keeping with this, perhaps the people of such islands are also halfway people, belonging to the sea as well as to the land?  At any rate, the legend of Morveren’s island is that once, long ago, out in the bay there was a town with a great hall and houses, which was overwhelmed by a gigantic wave.  Few of the townspeople escaped, but those who did became the islanders – while some of those who drowned may have become sea people.  And one of the things saved was a violin, now one of the great treasures of the island.

When a Polish ship is wrecked in a storm, Morveren joins her father and the islanders as they search for survivors and for bodies swept up on the strand. And in the morning after the storm, Morveren discovers a boy half-buried in the sand… but he’s not a human boy.  He’s Malin, a Mer with a seal’s tail, who’s been flung up on the beach and badly injured. Malin is distrustful of humans, and Morveren can’t help him on her own.  She has to enlist her twin sister Jenna to help her carry Malin over the rocks to a deep rock pool in which he can slowly recover.

Morveren finds herself drawn more and more to the cold waters of the Cornish sea and her Mer blood.  She sees and speaks and swims with the Mer; and her little brother Digory can hear their wild music out beyond the surf.  When local bad boy Bran discovers the secret, Malin’s life and freedom are at stake. And then Digory disappears with the treasured violin – and it’s up to Morveren to find him in the kingdom of the Mer.

Here Morveren dives deep into the sea with the help of the Mer:

We swim down and down, where moonlight can barely reach.  The water shimmers with faint phosphorescence.  We swerve sharply to avoid a Portuguese Man o’ War that swims towards us with outstretched tentacles, and as we turn a thick dark shadow looms ahead of us.  The weight of the water presses down.  I glance up and see how far I am from the air. If I needed to breathe, I don’t think I’d get back there in time.  We’re so deep, much further underwater than I’ve ever been in my life.  My heart pumps hard and the noise of my rushing blood almost drowns the music.

My mouth fills with water.  I gulp and choke and I know I’m not in Ingo any more.  I tear my wrists loose from the Mer grasp.  I’ve got to get out.  I’ve got to swim up.

“Stormswept” plays with all sorts of ideas about identity and belonging.  Jenna and Morveren are identical twins with very different personalities.  Jenna is kind, sweet-natured, a good scholar, the dutiful one – yet she’s attracted to the rough Bran whose father beats him.  Morveren is the passionate, wilful one.  Jenna is oblivious to the call of the sea, while Morveren’s very name means ‘sea girl’. But the twins are inextricably bound together – unless the world of Ingo can lure Morveren away.

One of Helen Dunmore's strengths is her ability to conjure up a very concrete sense of place and community.  I found myself believing in the reality of Morveren's island and the conflicting ambitions of those who live there.  'Stormswept' is a lovely, lyrical book, which anyone will enjoy who is enchanted by the beauty and danger of the sea.

Stormwept is published in paperback by HarperCollins

Posted by Katherine Langrish at 13:03