Stolen by the Fairies 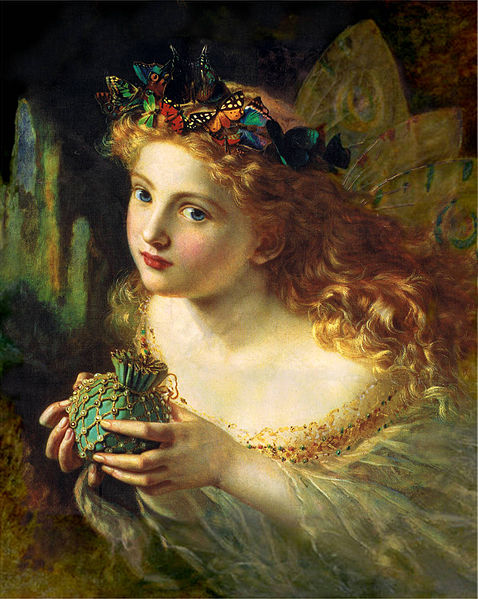 From ‘The Western Island’ by Robin Flower, Clarendon Press, 1944
A tale of Tomàs O Crithin from the Great Blasket

It is not so long ago (said he), that a woman of my mother’s kin, the O’Sheas, was taken, and when I was young I knew people who had seen her.  She was a beautiful girl, and she hadn’t been married a year when she fell sick, and she said that she was going to die, and that if she must die she would rather be in the home in which she had spent her life than in a strange house where she had been less than a year.  So she went back to her mother’s house, and very soon she died and was buried. She hadn’t been buried more than a year when her husband married again, and he had two children by his second wife.  But one day there came a letter with a seal on it.

It was from a farmer that lived in the neighborhood of Fermoy.  He said that now for some months, when the family would go to bed at night in his farm, if any food were left out they would find it gone in the morning. And at last he said to himself that he would find out what it was that came at night and took the food.  So he sat up in the corner of the kitchen one night, and in the middle of the night the door opened and a woman came in, the most beautiful woman he had ever seen with his eyes, and she came up the kitchen and lifted the bowl of milk they had left out, and drank of it.  He came between her and the door, and she turned to him and said that this was what she had wanted. So he asked her who she was, and she said that she came from the liss at the corner of his farm, where the fairies kept her prisoner. They had carried her off from a place in Ventry parish, and left a changeling in her place, and the changeling had died and been buried in her stead.

She said that the farmer must write to her people and say that she was in the liss with the fairies, and that she had eaten none of the food of the fairies, for if once she ate of their food she must remain with them for ever till she died… and when he wrote to her people he must ask her mother if she remembered one night when her daughter lay sick, and the mother was sitting by the fire, and thinking so, she had forgotten everything else, and the edge of her skirt had caught fire. …If she remembered that night, it would be a token for her, for on that night her daughter had been carried off, and the fire in her mother’s skirt was the last thing she remembered of her life on earth.  And when she said this she went out through the door, and the farmer saw her no more.

So the next day he wrote the letter as she had told him.  But her people did nothing, for they feared that if they brought her back, there would be trouble because of the new wife and her two children.  And she came again and again to the farmer, and he wrote  seven letters with seals, and the neighbours all said it was a shame to them to leave her with the fairies in the liss; and the husband said it was a great wrong to leave his wife in the liss, and whatever trouble it would bring, they should go and fetch her out of the liss.  So they set out, her own people and her husband, and when they had gone as far as Dingle, they said they would go and ask the advice of the priest.

So they went to the priest that was there at that time, and they told him the story from beginning to end.  And when he heard the story, he said that it was a hard case, and against the law of the church. And the husband said that, when they had brought the woman out of the liss, he would not bring her back with him to make scandal in the  countryside, but would send her to America, and would live with his second wife and her children.  But the priest said that even if man’s wife were in America, she was still his wife, and it was against the law of the Pope that a man should have two wives; and, though it was a hard thing, they must leave her in the liss with the fairies, for it was a less evil that she should eat the fairy bread and be always with the fairies than that God’s law should be broken and a man have two wives living in this world.

They found nothing to say against the priest, and they went back home sorrowing.  And when the woman heard this from the farmer she went back to the fairies to the liss, and ate their bread and remained with them.


Picture credit:
Take the Fair Face of Woman, and Gently Suspending, With Butterflies, Flowers, and Jewels Attending, Thus Your Fairy is Made of Most Beautiful Things - by Sophie Gengembre Anderson (1823-1903)

Posted by Katherine Langrish at 02:47