Magical Classics: 'The Nightingale and the Rose' by Oscar Wilde 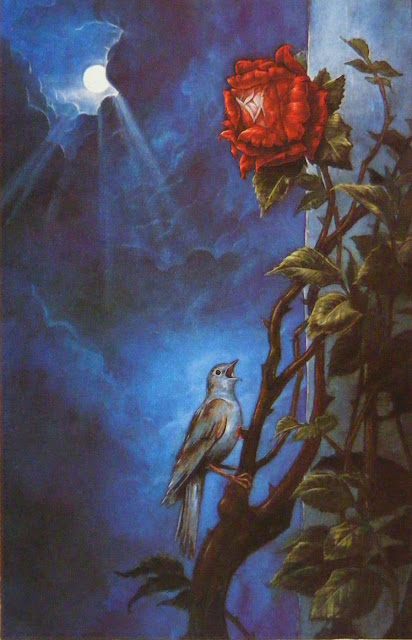 Mary Hoffman writes about a poignant tale of love and sacrifice...

My copy of The Works of Oscar Wilde (Collins 1948, 1960 edition) has my name and “Newnham” written on the flyleaf so I must have had it at university. But we never studied Wilde on my Eng. Lit. course and I know I fell in love with him while still at school so I think I think I had it then and must have put my stamp on it when I left home.


It would have been typical of me to pack my Oscar Wilde when heading off for the adventure of university because it had by then become a bit of a comfort blanket, the one book I would have saved in a fire. The plays, including Salome, for which Aubrey Beardsley did those splendid illustrations, The Picture of Dorian Grey, the fabulous Portrait of Mr W. H. and above all the Fairy Tales, were my absolute ideal of what writing should be.

Everyone knows The Happy Prince and The Selfish Giant, many have heard of The Canterville Ghost and Lord Savile’s Crime but I have never seen anything written about The Nightingale and the Rose.

It’s a short story – no more than four and a half pages in my Complete Works – and takes the form of a parable:

A Student is madly in love with the daughter of a professor, who has agreed to dance with him at the Prince’s Ball if he brings her a red rose. But all the roses in the Student’s garden are white or yellow; the only red rose is frostbitten and will bear no flowers that summer.. The Nightingale overhears the Student’s plaint.

“Here at last is a true lover,” said the Nightingale. “Night after night have I sung of him, though I knew him not: night after night have I told his story to the stars and now I see him. His hair is dark as the hyacinth-blossom, and his lips are as red as the rose of his desire; but passion has made his face like pale ivory, and sorrow has set her seal upon his brow.”

The bird decides to help him and, after seeking easier ways, chooses the bitter path of sacrifice.  The red rose tree tells her that she must construct a blossom out of her music by moonlight, through singing with her breast against a thorn. The thorn will pierce her heart and her life’s blood flow into the rose-tree and produce one perfect flower.

“Death is a great price to pay for a red rose,” cried the Nightingale, “and Life is very dear to all .....Yet Love is better than Life, and what is the heart of a bird compared to the heart of a man?”

The Student can’t understand the Nightingale’s passionate song in which she tells him he will have his rose; he makes notes on her music – “ she is like most artists; she is all style without any sincerity. She would not sacrifice herself for others.”

But of course that’s just what she does, singing all night of love with the thorn against her breast. A pure white rose springs from the frozen tree and the Nightingale sings on in her agony until the thorn pierces her heart and the perfect flower is stained crimson.

At noon (realistic detail) the Student looks out of his window and sees the red rose, thanking his good luck, while the Nightingale’s body lies cold in the long grass, the thorn still in her heart. He plucks the rose, runs to the Professor’s house and proffers it to the beautiful daughter, claiming his dance.

But the girl frowned. “O am afraid it will not go with my dress,” she answered; “and, besides, the Chamberlain’s nephew has sent me some real jewels, and everybody knows that jewels cost far more than flowers.”

The Student throws the rejected rose into the street, where it falls into the gutter and it run over by a cartwheel.

“What a silly thing Love is!” is the Student’s conclusion and he resolves to study Philosophy and Metaphysics instead, taking down a dusty book.

Why did this tragic story mean so much to a teenage girl? The unrequited love theme (both Student and Nightingale) was bound to appeal and now that I look back on it, the failure to recognise or appreciate the sacrifice made is the same as in my other favourite Fairy Tale: Hans Andersen’s The Little Mermaid.

The Student is just as unknowing and ungrateful as the Prince. But at least the mermaid gets to live on in the foam of the sea while the small brown bird with the glorious voice rots unseen in the long grass. It broke my heart and it breaks it all over again to read it for this blog post.

Maybe I thought that was what love would be like? That it always involved pain and the willing giving up of the self for the beloved? After all this time, who knows? The writing style is over-flowery in places; Oscar loved his pomegranates and rubies throughout his life. And there is no place here for the dry humour of there being no cucumbers available in the market, “not even for ready money.”

But as a teenager who had already experienced the pangs of many “crushes,” I preferred the sensuous and tragic to the warm and funny.

And now I think it was prophetic, part of Oscar’s own self-destructive streak that brought about his downfall. (He didn’t have to prosecute the Marquess of Queensberry (see below) and his friends begged him not to, knowing the risk of Oscar’s – at that time illegal – homosexual practices being exposed).

Oscar’s years picking hemp in jail were the sacrifice he made for Bosie, who, although he lived with his older lover in France in the latter part of 1897, later repudiated him and married an heiress. Maybe Constance, Oscar’s wife, too would have seen herself in the role of Nightingale with Oscar as Student and Bosie as the Professor’s daughter.

I’m glad to say it wasn’t prophetic of my own later life: no trampled roses there. But it still speaks to me with an incredible poignancy and I wouldn’t swap it for any more robust story with a happy ending.


Oscar Fingall O’Flahertie Wills Wilde was born in Dublin in 1856. His father was a surgeon and his mother, “Speranza,” a hostess both Society and Political. After studying at Trinity College, Dublin, Oscar won a scholarship to Magdalen, Oxford, where he took Firsts in Mods and Humanities and won the Newdigate Prize for his poem, Ravenna.

Although an avowed Aesthete at Oxford, he was of powerful build with hands like hams. So when some Hearties decided to dunk him in the Cherwell as a punishment for effeminacy, they came off rather worse. In 1884 he married Constance Lloyd, who bore him two sons. In 1888, he published The Happy Prince and Other Tales. The last decade of the 19th century was enormously productive for him: his only novel, The Picture of Dorian Grey (1890); Lady Windermere’s Fan (1892); An Ideal Husband and The Importance of Being Earnest (1895).

1895 also saw his imprisonment with hard labour for two years for the crime of gross indecency, resulting from his unwise decision to prosecute the Marquess of Queensberry for libel, the Marquess being the father of Oscar’s lover Lord Alfred Douglas (“Bosie”). In prison Oscar wrote the Ballad of Reading Gaol (1898) and De Profundis, published posthumously. Oscar Wilde died, a broken man, in 1900.

Mary Hoffman is the author of numerous books including the best-selling picturebook Amazing Grace (1991) , and the well known ‘Stravaganza’ series for young adults, beginning with ‘City of Masks’, Bloomsbury 2002, which are set partly in our modern world and partly in an alternate universe’s 16th century Italy.  She has also written YA historical fiction like the highly acclaimed ‘Troubadour’.  Her website is http://www.maryhoffman.co.uk/, her personal blog is The Book Maven and she is the founder of the collective blog The History Girls

Picture credits:
'The Nightingale and the Rose', copyright PJ Lynch, is shown here by kind permission of the artist. More of his lovely work can be seen at pjlynchgallery.blogspot.co.uk
'Single red rose' by Kate Greenaway, at Wikimedia Commons
Posted by Katherine Langrish at 00:53