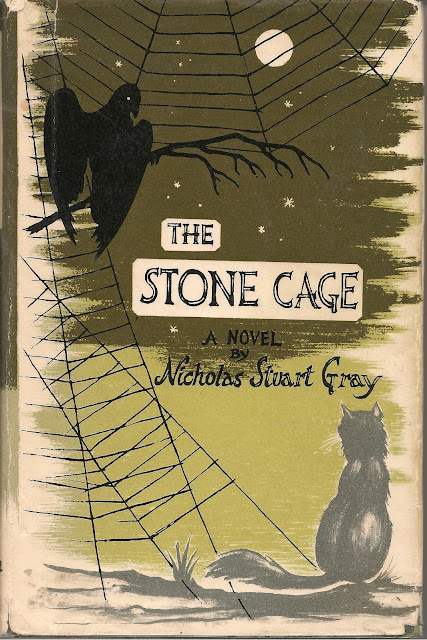 
I first read Nicholas Stuart Gray’s novel The Stone Cage when I was about eleven. It was an utter revelation to me.

The Stone Cage is a retelling of the Rapunzel fairy tale, told from the point of view of the witch’s cat. It was the first fairy tale retelling I had ever read, and I remember being amazed that a writer could take an old, well-known story and turn it into something utterly new and surprising.

I was also utterly enchanted by the story itself, and particularly by the characters of Tomlyn the cat, and Marshall, the witch’s raven. One was sleek, self-assured, coolly amused, and tantalised by the bewitching power of sorcery. The other was hunched and tattered and miserable, with a great heart.
What I remember most about The Stone Cage was the absolute assurance of the voice. It sounded exactly how I imagined a cat would speak:

‘My name is Tomlyn. I am very beautiful. Marshall says I am spiteful and wicked and a barbarian to boot. He’s jealous of my thick grey fur, my white chin and breast, and the snowy end of my tail. I suppose he can’t help being envious, the great rusty-black thing! He’s got a big, blunt beak, and stubby wings, and tiny little eyes... He’s old and stupid and a coward; with an endless flow of long words that he can’t possibly understand.’ 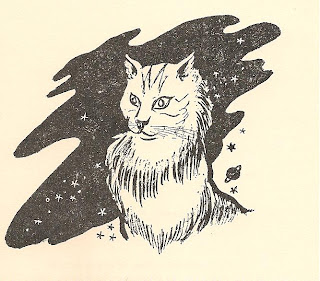 Nicholas Stuart Gray was born on 23 October 1922, in Scotland. From a young age, he made up stories and plays to amuse his brothers and sisters, and to try and escape his unhappy childhood. He described his mother as ‘beautiful and terrifying’.‘She was a megalomaniac,’ he said in an interview in 1973. ‘We grew up terribly unsure of ourselves and doubtful of other people, always prepared to be cut down … We were always ugly, stupid, gullible, useless people in her eyes.’

Gray admitted that the character of the witch in his play The Wrong Side of the Moon (1966) is ‘almost a biography’ of his mother and I wonder if she influenced the character of the witch in The Stone Cage, who was utterly egocentric and had no feelings of remorse for any of her actions.  ‘The sad thing about people like (my mother) is they are completely alone,’ Gray said in the same interview.

Gray left home at the age of fifteen, finding work as an actor and stage manager. His first play was produced before he was twenty years old, and he turned to writing for children in 1949 after seeing a hundred or more children queuing up for the cinema and wondering why there was no comparable entertainment for them in the theatre. He wrote the play Beauty and the Beast as a result, and it was shown at the Mercury Theatre in London in 1950.

Gray wanted, he said, ‘to give the children a sense of magic. Nobody attends to this enough. They give them too much realism. They can see it all on the box, they can see frightful things there. But they’re not being given a world to escape to … the world of the imagination. Children must have an escape line somewhere.’
His first novel, Over the Hills to Fabylon, was published in 1954. It is about a city that can fly away across the mountains any time the king feels his home is in danger. 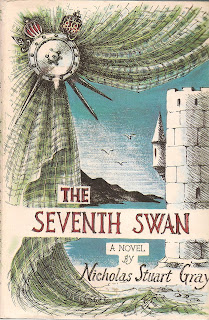 Other important works include The Seventh Swan, which tells what happened to the boy left with one swan wing instead of an arm; Down in the Cellar, an eerie story of  a family of children who find a gateway to another world in their basement;  Grimbold's Other World, about a black cat that teaches a boy about the world of the night; The Apple Stone, which tells of the adventures of a family of children who find a magic stone, and, of course, The Stone Cage, published 50 years ago this year.
Gray’s story line follows the basic plot of the well-known Grimm fairy tale, which had been translated into English in 1882 by Lucy Crane. Her translation was based upon the 1857 edition of the Grimm’s Kinder-und-Hausmärchen, in which the character of Rapunzel is at its most passive and childlike. There is no mention of any sex, or pregnancy, or birth of twins in that tale, and Rapunzel betrays herself to the witch (rather stupidly), by complaining how much heavier she is to pull up than the prince.
Within the narrow confines of that tale, Gray created a story that celebrates the redemptive power of love. Tomlyn the cat and Marshall the raven – natural enemies and rivals for the witch’s rare expressions of affection – are united in their desire to save Rapunzel. They protect her from the witch, an old, ugly and malicious woman who craves power.
The story begins when the witch tricks a woodcutter into giving up his newborn daughter. He asks her what she intends to do with the baby. ‘Mother Gothel answered the man’s question in a small and faraway voice: “I will teach her my craft. Teach her to be the greatest and wickedest witch in all the world.”’
However, her plans are thwarted when Tomlyn and Marshall lay a spell on the little girl so that she was unable to work magic.  Rapunzel grows to maturity, frustrating and angering the witch in her inability to remember even the simplest of spells.
Then the two conspirators bring a young man to the witch’s garden in the hope he would rescue Rapunzel, but unwittingly she betrays him and he is cast down from the tower and blinded. Again, the cat and the raven work to bring Rapunzel and the prince together again, even though Rapunzel has been banished to the dark side of the moon.
In the final confrontation, the raven tells the witch he no longer fears her. Rapunzel agrees, ‘very clearly and gently:
‘I’m not afraid of Mother Gothel, either.’
‘The witch gave a shrill cry … “You must fear me! You must! Sorcery can only thrive on fear.’

Rapunzel’s courage – and the bravery of her animal friends – together overcome the witch, who is transformed by the raven’s magic into a bare and lifeless-looking tree. There she must stay, ‘dead and dried, till a heart may grow inside.’

Rapunzel and her prince return to the human world, but the raven and the cat stay with the witch on the dark side of the moon, to look after her until she returns to being human.  In the final scene, Tomlyn the cat pours a few drops of water on the tree’s roots, and a small, green leaf uncurls from a bare twig. In this way, Nicholas Stuart Grey shows how the animals’ faithfulness and compassion to the witch, despite her wickedness, hold out the hope of her redemption.

Gray’s dramatic training shows in the swift, graceful pace, and the quick, vivid character sketches – not a word is ever wasted. The dialogue is brilliantly done, being clever, witty and poignant in turns. Tomlyn the witch’s cat steals every scene. He speaks and acts and thinks just like a cat should, and I was not at all surprised to discover that Gray is most probably the only person ever to write a biography of his own cats (The Boys,1968).  I also have a deep affection for Marshall the raven, and sympathise with his yearning to read, and his longing to love and be loved.

Haunting, whimsical, funny and heart-breaking, The Stone Cage is one of the most beautiful and profound books ever written for children. At its heart, The Stone Cage tells us that love, compassion and courage will win out over hatred, cruelty and cowardice, and that is a lesson that cannot be taught often enough.

All quotes from The Pied Pipers: Interviews with the Influential Creators of Children’s Literature, 1973 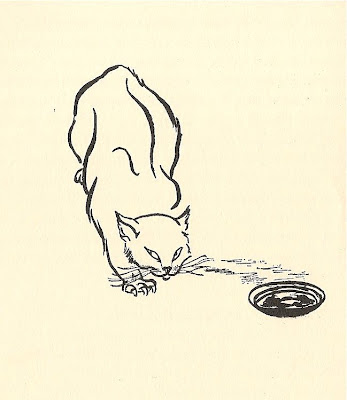 Kate Forsyth's adult fantasy 'Bitter Greens', based on the fairytale 'Rapunzel', is published in the UK by Allison & Busby. Kate is the bestselling author of more than twenty books, ranging from picture books to poetry to novels for both children and adults. She has won numerous awards and been published in fourteen countries around the world. She lives by the sea in Sydney with her husband, three children, a rambunctious Rhodesian Ridgeback, a bad-tempered black cat, and many thousands of books. Her new novel, 'The Wild Girl', about the love affair between  Wilhelm Grimm and Dortchen Wild, is to be published in the UK in 2013, and you can visit her website at www.kateforsyth.com.au

Posted by Katherine Langrish at 00:37