Magical Classics: The Hundred and One Dalmatians by Dodie Smith 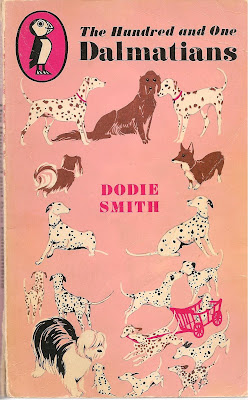 Is this a fantasy? Maybe not: there's no actual magic as such.  Who cares? No apologies!  This book IS a Magical Classic.  Forget the Disney version (enjoyable as that was).  The real book is so much better, so much more.

First, it has one of the best villains ever – elegant Cruella de Vil with her black and white hair and her ‘absolutely simple white mink cloak’, her black-and-white striped car with ‘the loudest motor-horn in England’, and her truly devilish plan to murder and skin ninety-seven Dalmatian puppies for her husband’s fur farm. Cruella is ‘an old school friend’ of Mrs Dearly, Missus’s owner (or pet): and when Missus gives birth to seventeen puppies, Cruella has them stolen and spirited away to her family seat in Sussex – Hell Hall – to be guarded by her dastardly henchmen, Saul and Jasper Baddun.  If Cruella de Vil is not a witch, she comes pretty darned close. 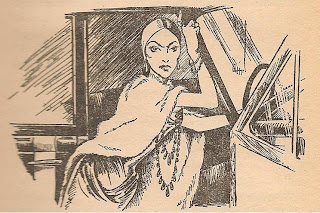 As soon as the puppies go missing, their father, gallant Pongo, sets his immense intellect to work:

Long after Missus, utterly exhausted, had fallen asleep, he lay awake, staring at the fire, chewing the wicker of his basket as a man might smoke a pipe.
Anyone who did not know Pongo well would have thought him handsome, amusing, and charming, but not particularly clever. He was often still so puppyish. He would run after balls and sticks, climb into laps far too small to hold him, roll over on his back to have his stomach scratched.  How was anyone to guess that this playful creature owned one of the keenest brains in Dogdom?
It was at work now.  All through the long December night he put two and two together and made four.  Once or twice he almost made five.

The book is steeped in thirties fashions, literary and actual. If Sherlock Holmes was the ultimate pipe-smoking Brain, Albert Campion and Lord Peter Wimsey were the apparently foolish fellows whose ‘silly ass’ exteriors disguise forensic minds and nerves of steel. Pongo is a worthy addition to their number. He rapidly realises that Cruella is to blame, and on Primrose Hill above London, he and his wife Missus activate the Twilight Barking, that great chain of dog communication. 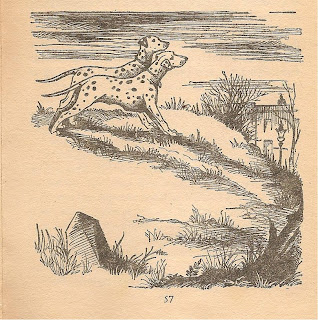 They barked to the north, they barked to the south, they barked to the east and west.  And each time they changed their positions, they began the barking with three very strange, short, sharp barks.
“Anyone would think they were signalling,” said Mr Dearly.
But he did not really think it. And they were signalling.
… All dogs know about the Twilight Barking.  It is their way of keeping in touch with distant friends, passing on important news, enjoying a good gossip. But none of the dogs who answered Pongo and Missus expected to enjoy a gossip, for the three short, sharp barks meant: “Help! Help! Help!”
No dog sends that signal unless the need is desperate.  And no dog who hears it ever fails to respond.

Does your heart swell? Mine does. Dodie Smith taps into deep things here.  We long to believe animals can communicate with one another, that they are capable of far more than we realise.  We sense that although they live with us, we are ignorant of much of their lives – we feel they know us better and more nearly than we can know them. Through the Twilight Barking, Pongo locates his puppies in faraway Sussex, and, with his brave wife Missus, sets out to rescue them.

On the way there and back they have many adventures which never got into the cartoon or the film. One touching example is the chapter called ‘Hot Buttered Toast’, in which, when Pongo has been injured by a stone flung by a small child, he and Missus take refuge in a manor house belonging to an elderly black spaniel of great and dignified courtesy and his even even older ‘pet’ Sir Charles. The tired dogs sleep on a four-poster bed and descend for the evening to eat hot buttered toast and tea, and bask unnoticed by the fire while Sir Charles snoozes. But then he wakes: 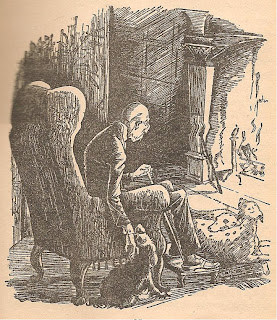 The fire was no longer blazing brightly but there was still enough light to see that the old gentleman was awake and leaning forward.
“Well if that isn’t Pongo and his missis,” he murmured smilingly.  “Well, well!  What a pleasure!  What a pleasure!”
…The Spaniel whispered, “Don’t move, either of you.”
“Can you see them?” said the old gentleman, putting his hand on the Spaniel’s head.  “If you can, don’t be frightened.  They won’t hurt you.  You’d have liked them. Let’s see, they must have died fifty years before you were born – more than that. …How often they sat there in the firelight. Hey, you two!  If dogs can come back, why haven’t you come back before?
“…This house is supposed to be full of ghosts, but I’ve never seen any. I dare say I’m only seeing you because I’m pretty close to the edge now – and quite time, too.  I’m more than ready. Well, what a joy to know that dogs go on too – I’d always hoped it. Good news for you too, my boy.” He fondled the Spaniel’s ears. “Well, Pongo and his pretty wife, after all these years!  Can’t see you so well, now, but I shall remember!”
The fire was sinking lower and lower. They could no longer see the old gentleman’s face, but soon his even breathing told them he was asleep again.

When Pongo and Missus finally arrive at Hell Hall... 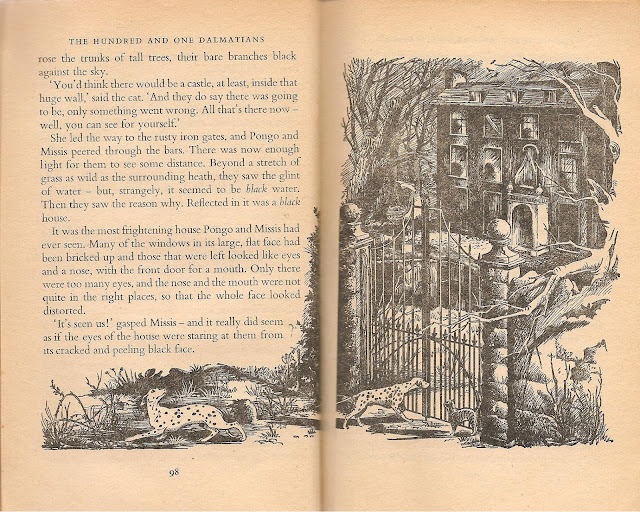 ... they discover the true scale of Cruella's wickedness. Not just their own fifteen puppies are incarcerated here - there are 97 little spotted victims, and the only reason they are still alive is that the criminals are waiting for them to grow.  Naturally Pongo and Missus decide to rescue the whole bunch - in spite of the logistics.


Holed up in Hell Hall, the Baddun brothers fail to notice that Dalmatians are escaping. Why?  Because they are glued to their favourite show ‘What’s My Crime?’, in which ‘two ladies and two gentlemen, in faultless evening dress, had to guess the crime committed by a lady or gentleman in equally faultless evening dress:


A wild gleam came into [Jasper’s] eyes. “Saul, I bet no one has ever murdered ninety-seven Dalmatians.  It might do the trick for us!  It might get us on to ‘What’s My Crime’!”
“Now you’re talking!” said Saul Baddun. “You and me, in evening dress with carnatians in our buttonholes – and all England watching us.  But we must think up some really striking way of doing our crime. Could we skin them alive?”

Dodie Smith seems to have had some uncanny prevision of modern reality tv shows...

Witty, touching, clever, fun – with a cast of memorable characters, an exciting chase, a splendidly happy ending and a satisfying revenge – this is an adorable book.

All artwork by Janet and Anne Grahame-Johnstone
Posted by Katherine Langrish at 00:47

Email ThisBlogThis!Share to TwitterShare to FacebookShare to Pinterest
Labels: Dodie Smith, Katherine Langrish, The Hundred and One Dalmatians