What is YA fiction? 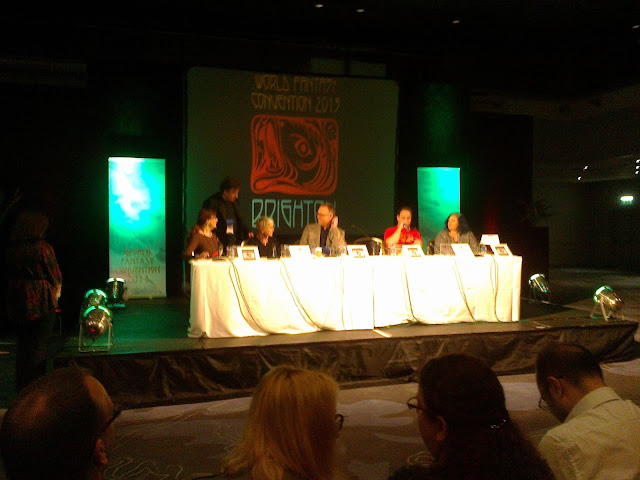 Here, in order from the left, are Delia Sherman, Susan Cooper, Garth Nix,  Neil Gaiman (at the back, heading towards his seat), Will Hill and Holly Black, taking part in a panel at the World Fantasy Conference 2013, which as you probably know was held in Brighton over last weekend.  What they were discussing provoked a good deal of passionate comment from the audience, both agreement and disagreement – most of which remained pretty much inaudible, as for some unknown reason the massive conference hall floor was not provided with roving mikes. 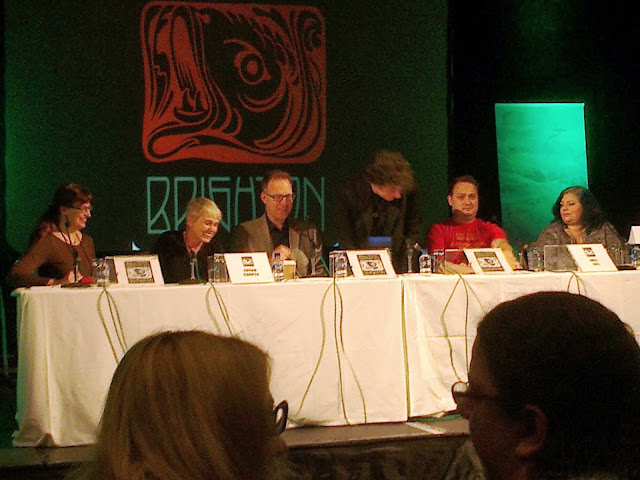 The subject under discussion was:  "The Next Generation:  Are All the Best Genre Books Now YA?" and the explanation ran: "Over the past decade the young adult market has seen a huge boom in genre titles and readers, in no small way helped by the Harry Potter series, The Hunger Games and the works of Philip Pullman and Neil Gaiman. What has caused this surge amongst younger readers, and can it be used to keep them reading into adulthood?" However, as these things tend to do, the discussion veered away into a conversation about the nature of YA fiction: what it is and what it isn't, and what makes it what it is.

So when is a book YA?  It's not easy to say.  Perhaps it's simply when the protagonist is a teenager or young adult.  So does that make 'The Catcher in the Rye' a YA book?  Discuss... But is 'To Kill a Mocking Bird' a children's book, just because Scout, the point of view character, is a child? Clearly not: so it's not as straightforward as that.

Moreover, is YA fiction a new phenomenon?  Other members of the panel were in broad agreement with Neil Gaiman when he said - I paraphrase - that YA is a new genre, and that in his youth and that of most of us, we sprang from reading children's books straight into adult fiction, especially genre fiction. Teenagers were not especially catered for.


Some of the people sitting around me wanted to question or at least qualify this - but it's difficult to make a nuanced point while effectively yelling from the fifteenth row.  Elizabeth Wein, sitting behind me, pointed out that maybe the perceived absence of YA fiction in the 60's and 70's is more about categorisation than actual fact. She pointed to books such as KM Peyton's Flambards series (in which the heroine grows up, elopes, marries, is widowed, remarries twice, has a child, loses a child...), Rosemary Sutcliff's historical novels, published as children's books, but always with young adult heroes - and Ursula K Le Guin's Earthsea novels in which the main characters start out as young adults and eventually even grow old.

So if ‘Young Adult’ is a new category, maybe this is only true in the sense that the idea been newly created: the books were always there.

Of course Neil Gaiman is correct to say that we also moved into ‘adult’ genre fiction.  Of course we did – to Agatha Christie and Dorothy Sayers, John Buchan, Isaac Asimov, Arthur C Clarke, Jack Schaeffer, Georgette Heyer.  But what about Alan Garner’s ‘The Owl Service’?  Is that a children's book?  Is ‘Red Shift’? What about TH White’s ‘The Once and Future King’? Also available were many non-genre (for want of a better word) novels which were both accessible and attractive to teenage readers and which dealt specifically, many of them, with the pains and challenges of growing up:  Rumer Godden’s ‘The Greengage Summer’, Dodie Smith’s ‘I Capture the Castle’, Jane Gardam’s ‘A Long Way From Verona’, and ‘Bilgewater’, and ‘The Summer After the Funeral’. Some of these were labelled adult books, some children’s: for better or worse, all would be marketed as YA today.  Labels or no labels, they existed.

These were the books I pulled off my parents’ shelves, or found for myself in the libraries as I – never left children’s books behind, I never stopped reading them – but as I hacked my own paths through the uncharted jungle that lay beyond the children’s shelves.

Elizabeth Goudge’s novels are a case in point. She may be best known today for her children’s novel ‘The Little White Horse’, which JK Rowling’s praise probably helped back into print.  It is indeed a lovely book, and so are her other children’s novels, especially my favourite, ‘Linnets and Valerians’- but she was, in the main, a writer of adult novels. At age 14, I found depth and complexity in her adult fiction – a thoughtfulness, a slower narrative pace, a concern for the difficulties of relationships, and a delight in abstract concepts of philosophy and religion which opened my horizons. There were nearly always children in these books, but the children interacted with adults and their concerns in an un-children’s-book-like way. Goudge wrote of terror and horror and mental illness. The sensitive child Ben, in ‘The Bird in the Tree’, is haunted by a sketchbook he has found which contains pictures of dead and decomposing bodies. He becomes terribly afraid of death for himself and for those he loves – but he doesn’t tell, or not for a long time. The story is not about Ben, but about a love affair between his mother Nadine and his cousin David, which threatens to break up his parents’ marriage and split his family. Ben and his brother and sister are not in control, but they are still affected by the actions of the adults in their lives.

Is this is what makes ‘The Bird in the Tree’ adult fiction? This lack of centrality for the child or teenage characters? What we now term YA fiction places the young person in the focus of the action, in the learning, decision-making centre. So Cassandra in ‘I Capture the Castle’ grows and learns, watches and experiences, and makes in the end the wise and sad decision not to accept an offer of love which is largely pity. But the boy Leo, in LP Hartley’s ‘The Go-Between’, although the point-of-view character, is on the edge of the action.  He doesn't understand what he's doing. Like Scout in To Kill a Mockingbird, he needs his adult self to narrate, to mediate, to understand, to explain. The child Leo has a minor part in adult lives. He is collateral damage, manipulated and used.

Finally, the panel and I think the floor agreed with Holly Black that the perennial attraction of Young Adult fiction - whether it was first published with that tag or not - is its freshness of perception.  When adult fiction deals with childhood and adolescence, it tends to concentrate on loss of innocence, on damage and disillusion. YA fiction  is all about rites of passage - first love, first kiss, first independence - and the thrills and spills of growing up.


(There's another look on this from Saxey at lightningbook, who was also in the Brighton audience!)
Posted by Katherine Langrish at 03:36