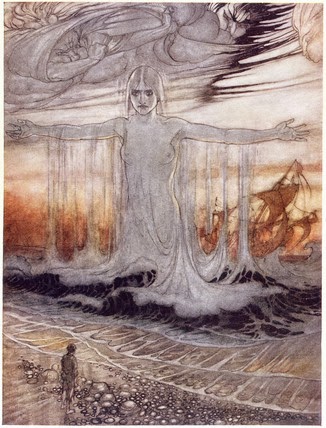 In this fabulous picture, Arthur Rackham depicts the beauty, vastness and terror of the sea as a white storm-goddess. There's a shipwreck behind her, and before her, dwarfed on the strand, is a bedraggled mariner who looks as though he very much ought to flee. She's the  embodiment of the terrifying waves we've all been seeing photographed in the news over the last few weeks, like this one from the BBC website http://www.bbc.co.uk/news/uk-25618080

It's at times like these that we're reminded of what our ancestors always knew: the sea is dangerous. We can walk along its edges, we can set out across it in our frail boats; we can even swim and dive in it, but always with a risk.  We don't belong there, we can't live there.  And so we're fascinated by the animals that do: we tell tales about them.  The seals, so like ourselves: warm-blooded breathing mammals - surely they must be magical creatures, to be able to inhabit this place we can't survive in? We follow them in imagination into their strange underwater world. We make myths of mermaids and selkies.

Mermaids and selkies represent the Other – they look like humans but they aren’t, or perhaps they are only half human.  In all the folklore I’ve read about mermaids, they have no souls, and sometimes they mourn this and sometimes they don’t care…  Hans Andersen’s little mermaid will disappear like foam on the sea if she doesn’t win a soul: but when she does gain a soul, she stops being a mermaid.  She becomes a spirit of the air, a sort of angelic Christian spirit – and so in either case she ceases to be, or at least loses her identity...

Most mermaid stories are sad.  Some mermaids are actively dangerous. One Greek legend tells of a giant mermaid who rises out of the sea to demand of passing ships, ‘What news of King Alexander?’  Unless she receives the response, ‘He lives, and reigns, and conquers the world!’ she wrecks the ship in her fury.  So mermaids are also a metaphor for the beauty and danger of the sea, which has the power to wreck ships and take men’s lives.  There’s a lot going on in mermaid stories. 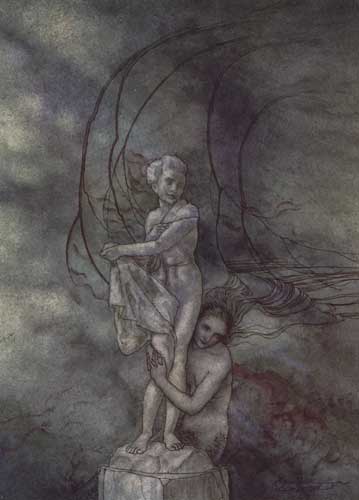 All fiction is affected by contemporary concerns.  Hans Christian Andersen’s ‘Little Mermaid’ was concerned with salvation because he wrote in a highly Christian century.  Nowadays, in our multi-cultural, multi-faith, multi-everything society, I think writing about mermaids offers an opportunity to explore issues of trust and communication between individuals who may look different from one another, who may appear to come from different worlds.   What is it to be ‘human’?  How do we define it?  How do we recognise similarities and reconcile differences?  In very different ways, Liz Kessler’s 'Emily Windsnap' books and Helen Dunmore’s ‘Ingo’ and its sequels explore these questions, as well as issues of pollution and climate change. In 'Ingo', merfolk and humans were once one people, who have diverged and now live in separate worlds - except that each race still impacts the other.  Liz Kessler's 'Emily Windsnap' is a little girl who herself bridges the gap: her father is mer, her mother human.  To which world does she belong?  Is it always necessary to choose?

And what about the original legends, such as the Cornish Mermaid of Zennor or the Scottish selkie and kelpie stories?  The legends are tremendously inspiring - but you have to think about them, find out what they are saying to you.  I wrote about the selkies, the shape-shifting seal people, in ‘Troll Mill’, the second part of my trilogy ‘West of the Moon’.  The legend is of a fisherman who sees the selkies dancing on the moonlit beach in the form of lovely women, and he snatches up one of their discarded sealskins so that the selkie girl can’t escape into the sea.  She has to marry him and bear his children, but one day she finds where he’s hidden the sealskin.  At once she throws it on, returns to the sea and abandons him and her human (half-human?) children forever.

For me, this legend seemed to be about the difficulty of understanding one another, even in a bond as close as marriage – in a sense, one’s partner is always the Other.  It speaks of the power struggle between couples – and the grief of a failed partnership – and, very strongly I thought, about the new mother’s plunge into post-natal depression.  And that was how I used it in my book, though keeping the magic and lyricism. In my short mermaid book ‘Forsaken’, the human-mer partnership is the other way around, based on an old Scandinavian ballad about a Mer-king who marries a mortal woman, and one day she hears the church bells ringing above the sea, and goes back to the land and leaves him forever.  Rarely in folklore do these stories end happily.  But I read the legend, and my spine tingled, and I wanted to see what would happen if one of the half-mer children went looking for her mother…  Would the ending be different?

Margo Lanagan, in ‘The Brides of Rollrock Island’ (Australian title 'Sea Hearts') has found something quite different in the selkie legends (see her post and my review).  In her book, the seals are  manipulated and transformed in a way which denies their nature and damages the wrongdoers.  It’s a marvellous book which will keep me thinking for – I suspect – years.  The beautiful women who step out of the seal carcasses appear, to the rough island men who have obtained them like mail-order brides, to be the culmination of delight: but they and their sons must live year in, year out, bearing the guilt of the seal women’s ever-present mild but steadfast grief.

Franny Billingsley’s ‘The Folk Keeper’ is another story which is concerned with questions of identity and belonging, a wonderfully creepy take on the selkie legend.  And Gillian Philip’s ‘Firebrand’ and ‘Bloodstone’ include not only selkies, as sinister death-omens, but her heroes of the Sithe, the Scottish faeries, ride kelpies too (water horses from the lochs): sleek and dangerous and man-eating.  Kelpies appear again in Maggie Stiefvater’s wonderful ‘The Scorpio Races’, an evocative and thrilling story of racing the savage water horses on a wild Scottish island.  Should men take and attempt to tame these otherworldly creatures?  Is it courage or cruelty?  Should they, perhaps, be left to their own world and their own nature?

These are all strong, wonderfully written books.  If you feel like taking a plunge into the perilous seas of fairyland, do try them!  And on Friday, the blog will continue to explore the selkie theme with a guest post from Laura Marjorie Miller.

Posted by Katherine Langrish at 02:24