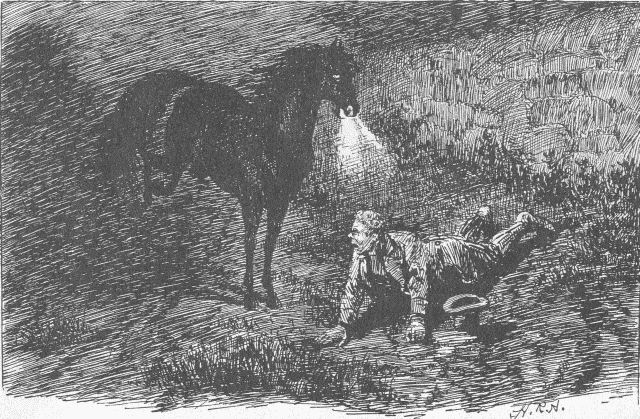 The Pooka seems to be of the family of the nightmare. He has most likely never appeared in human form… His shape is that of a horse, a bull, goat, eagle, ass, and perhaps of a black dog, though this last may be a separate spirit.  The Pooka’s delight is to get a rider, whom he rushes with through ditches and rivers and over mountains, and shakes off in the grey of the morning.  Especially does he love to plague a drunkard – a drunkard’s sleep is his kingdom.

The Dullahan is another gruesome phantom. He has no head, or carries it under his arm.  Often he is seen driving a black coach, called the coach-a-bower [Irish Cóiste-bodhar: deaf or dead coach], drawn by headless horses. It will rumble to your door, and if you open it, a basin of blood is thrown in your face. To the houses where it pauses, it is an omen of death.  Such a coach, not very long ago, went through Sligo in the grey of the morning (the spirit hour).  A seaman saw it, with many shudderings. In some villages its rumblings are heard many times in a year.

The Leanhaun Shee (fairy mistress) seeks the love of men.  If they refuse, she is their slave; if they consent, they are hers, and can only escape by finding another to take their place. Her lovers waste away, for she lives on their lives. Most of the Gaelic poets, down to quite recent times, have had a Leanhaun Shee, for she gives inspiration to her slaves. Her lovers, the Gaelic poets, died young. She grew restless, and carried them away to other worlds, for death does not destroy her power.