Like most children’s authors, I make occasional school visits where I talk about ‘where ideas come from’ and tell some of the stories behind the historically based fantasies such as Troll Fell and Dark Angels which represent most of my output so far.   Usually at the end of each visit the children ask me questions, and though some require a certain amount of patience to answer (such as: ‘What made you start writing?’ when I’ve just spent forty-five minutes explaining that very thing), the majority are intelligent and thoughtful - even insightful.  The best question ever put to me was from a boy of 13 or so who asked, ‘If you could go back to anywhere in the past, where would you go?’

No one had asked me that before. No one has asked it since. I had to stop and think. Where would I go?  There’s a short story – could it be by Ray Bradbury? – about time-trippers who go back to the beginning of the First Century to try and witness the Crucifixion. It all goes wrong for them.  I thought about that; it didn’t seem appropriate: and suddenly I knew just where I'd want to go. ‘Stonehenge,’ I said. ‘I’d love to go back to when they were building Stonehenge, and find out what they were really doing there.’ The boy nodded seriously.  To him, too, it seemed a good time and place to visit.

We're gradually learning more and more about Stonehenge and its landscape: the story, whatever it is, is becoming ever more fascinating. But we’ll still never really know what they were doing there, will we?  Not for sure, even if we can speculate. Has any trace of what they believed come down to us?  What were their myths and legends? What hero stories did they tell?

The archaeologist Francis Pryor, in his book ‘Britain BC’, writes of the Northern Irish Bronze and Iron Age site known as Navan Fort (County Armagh):

The Cattle Raid of Cooley describes how the mythical hero Cú Chulainn helps Conchobar, king of Ulster, based at his capital Emain Macha (pronounced Owain Maha) exact retribution for a cattle raid carried out by warriors of the rival power of Connacht, to the south.  Scholars are agreed that The Cattle Raid of Cooley refers to events in pre-Christian Ireland.  There can be no doubt that Emain Macha was the capital of the Ulster kings.  And it just so happens that it is also the Irish name for Navan Fort.

In the early Iron Age a series of nine roundhouses were built at Navan Fort; but in the first century 100 BC these were replaced by a massive wooden structure of over 250 tall posts arranged in concentric rings. Shortly afterwards, it was filled with boulders and burned to the ground. From the air, the open excavation shows a regular, segmented, pizza-like appearance.  Pryor adds:


... Chris Lynn has made a special study of the symbolism and imagery surrounding Navan.  He considers that the huge, post-built structure that was erected in 94 BC was a bruidne, or magic hostelry; these have been likened to an Iron Age Valhalla.  According to the Irish epics the heroes were lavishly feasted in the bruidne, then at the end of the meal it was burned down around them and they were immolated where they sat.


Here, perhaps, is a tiny glimpse of the significance of a prehistoric monument, preserved - as they say - in legend and in song. You can read about just such an immolation in part of the Ulster cycle, The Destruction of Da Derga's Hostel  ("Da Derga" means "Red God"). Da Derga's Hostel, or inn, was in Leinster and as far as I know has no modern presence, but its story suggests possibilities for the burned structure at Emain Macha. 'Seven doorways there are in it, and seven sleeping rooms between every two doorways'.  in which Conaire Mor, High King of Ireland, dies, having breached the conditions of several geasa laid on him at birth.  Conaire is a heroic Iron Age figure:

The colour of his hair was like the shining of purified gold; the cloak about him was like the mist of a May morning, changing from colour to colour; a wheel brooch of gold reaching from his chin to his waist; his golden-hilted sword within his reach.

But he and his company are attacked by outlaws, the Three Red Hounds of Cualu and their ally Ingcel the One-Eyed:


...three times the Inn was set on fire and three times it was put out again... and at last there was none left in the Inn with Conaire but Conall, and Sencha, and Dubthach.  Now from the rage that was on Conaire, and the greatness of the fight he had fought, a great drought came on him, and such a fever of thirst, and no drink to get, that he died of it.


It’s exciting, stirring, it gives me goosebumps, but it’s the exception rather than the rule. What were the stories told by the builders of Stonehenge? We have none earlier than the medieval conjectures of Geoffrey of Monmouth, who thought Merlin built it with the help of Irish giants.

It’s not just Stonehenge though. Over 1000 stone circles can still be seen in the British Isles, even if many are small and insignificant. I once took my husband and children to try and rediscover a little one on the moors above Malham in the Yorkshire Dales, where I used to live. It’s marked on the Ordnance Survey map, and I’d visited it by myself years before: a rough group of a few knee-high boulders leaning out of the moor-grass. We couldn’t find it, and not only that, there was an inexplicable, lowering, heavy gloom about the day which sapped our spirits. The children whined, we felt depressed: we gave up and returned home to discover, later, an eclipse of the sun had been happening during our walk. Not a total eclipse, but enough to explain the failure of the light, the doomy sense of pointlessness we’d felt. And whoever built that little circle, thousands of years ago – what would they have made of our experience?

In the Lakes last summer, driving back over Black Combe from the coast at Ravenglass, I spotted the tiny symbol of a stone circle marked on the route map. It took a bit of finding, diving up the tiny twisting roads and finally squishing the car into a hedge and tramping up a mile and a quarter of rough trackway towards a distant farm.  I wasn’t expecting much.  I thought it would be like the Malham circle, a small set of minor stones poking out of the turf.  As we drew nearer to the farmhouse, we saw this: 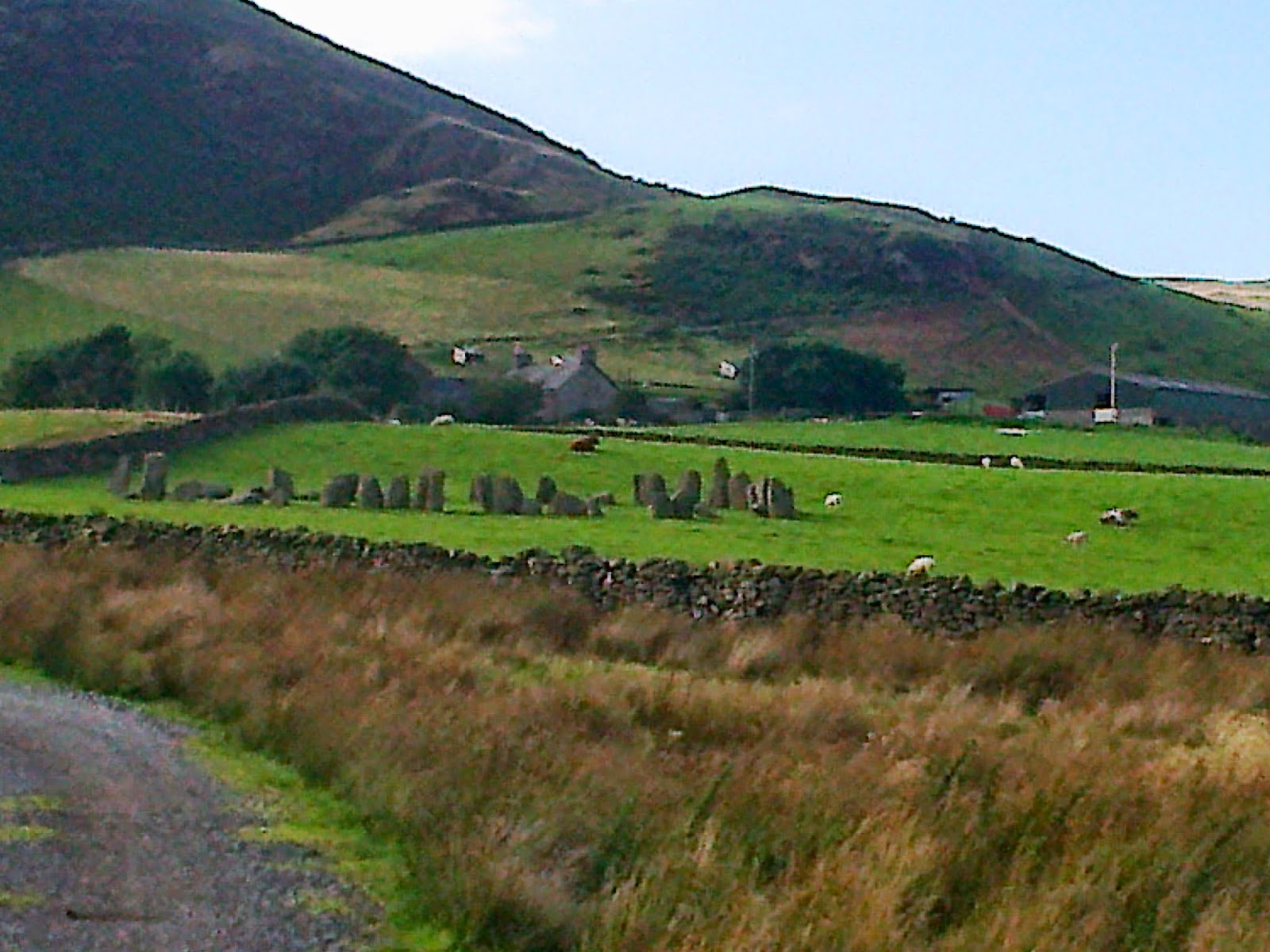 And getting closer, this: 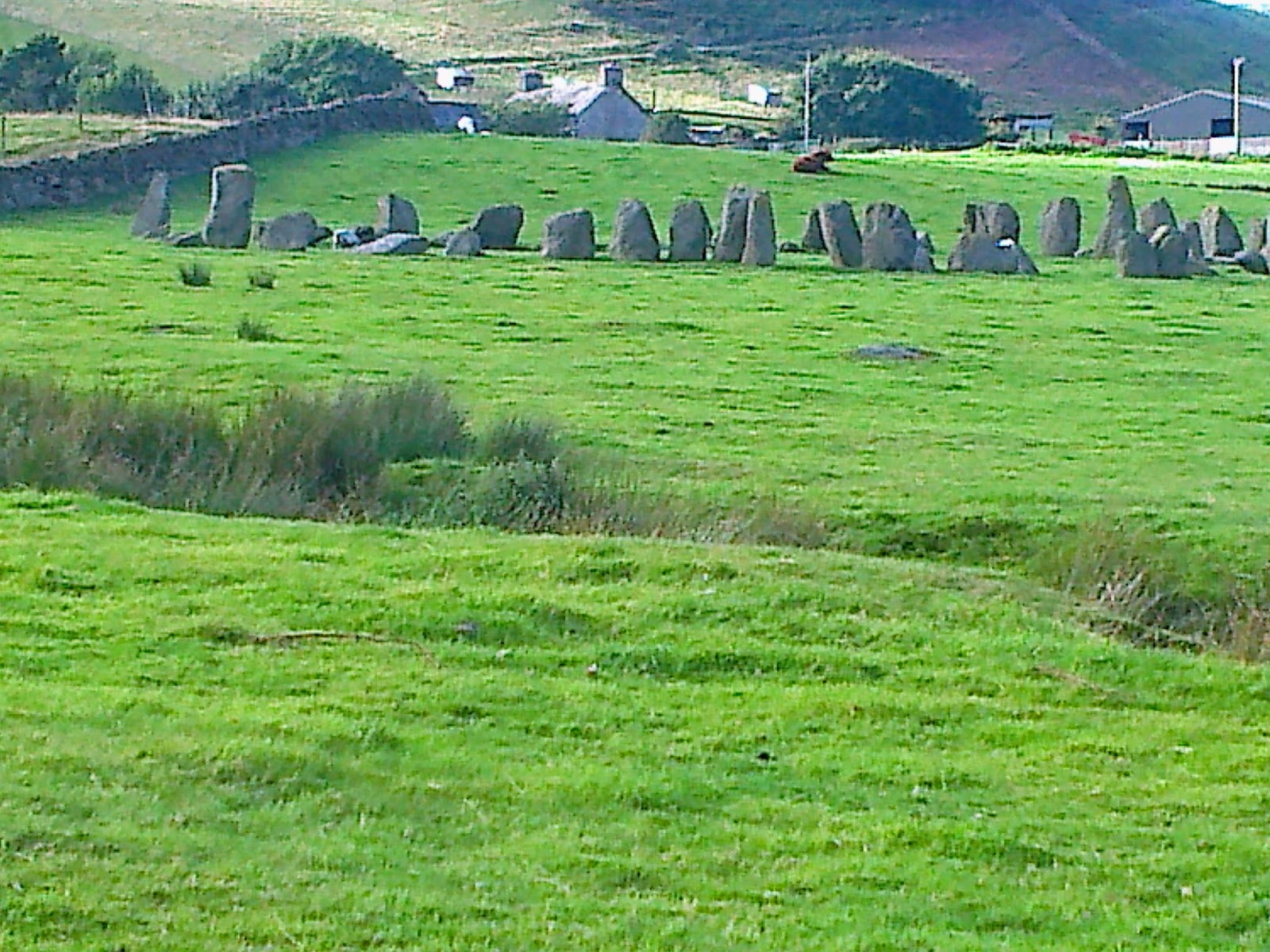 This was no minor stone circle. It is Sunkenkirk, or Swinside Stone Circle, on the north-east side of Black Combe, and it's almost complete, containing 55 stones. (I made it 58, but that included some broken bits.)  We tied the dog to the gate, as there were sheep and cattle in the field, and went in. 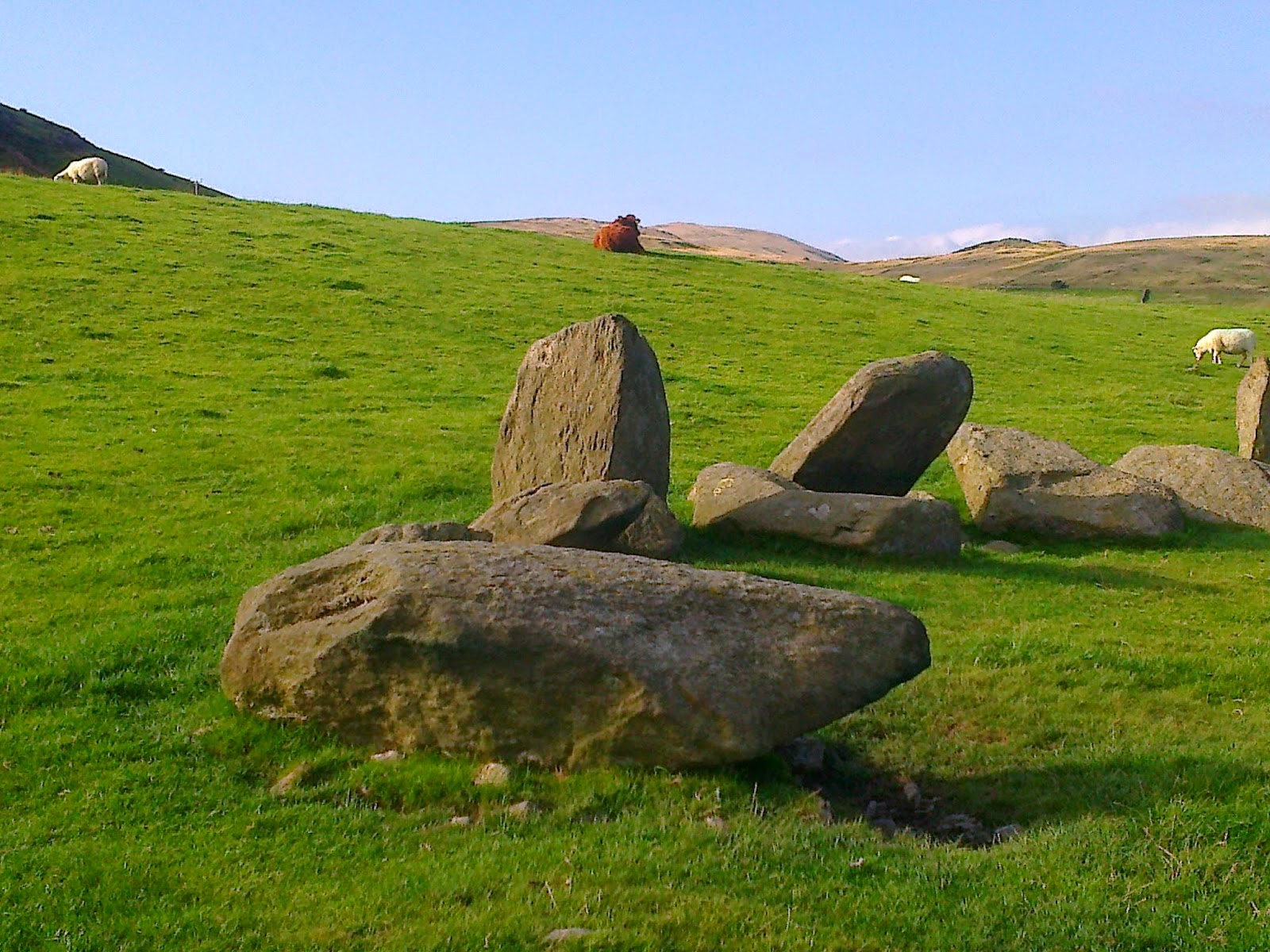 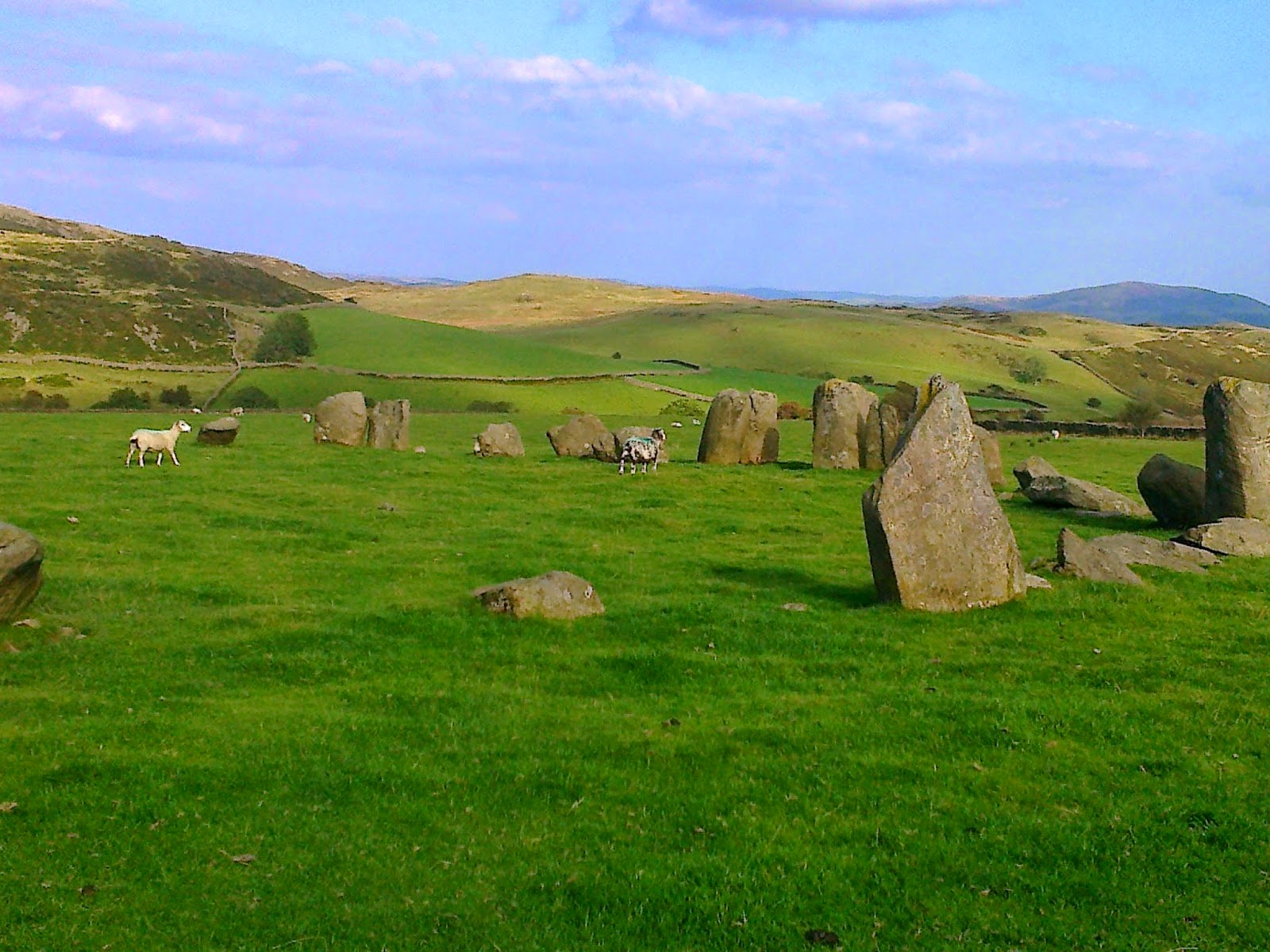 Once inside, I tried to photograph it in quadrants. The circle lies - like Castlerigg - on a high, flattish plateau surrounded on all sides by a horizon of noble hills. It feels like a dancing floor or a theatre. 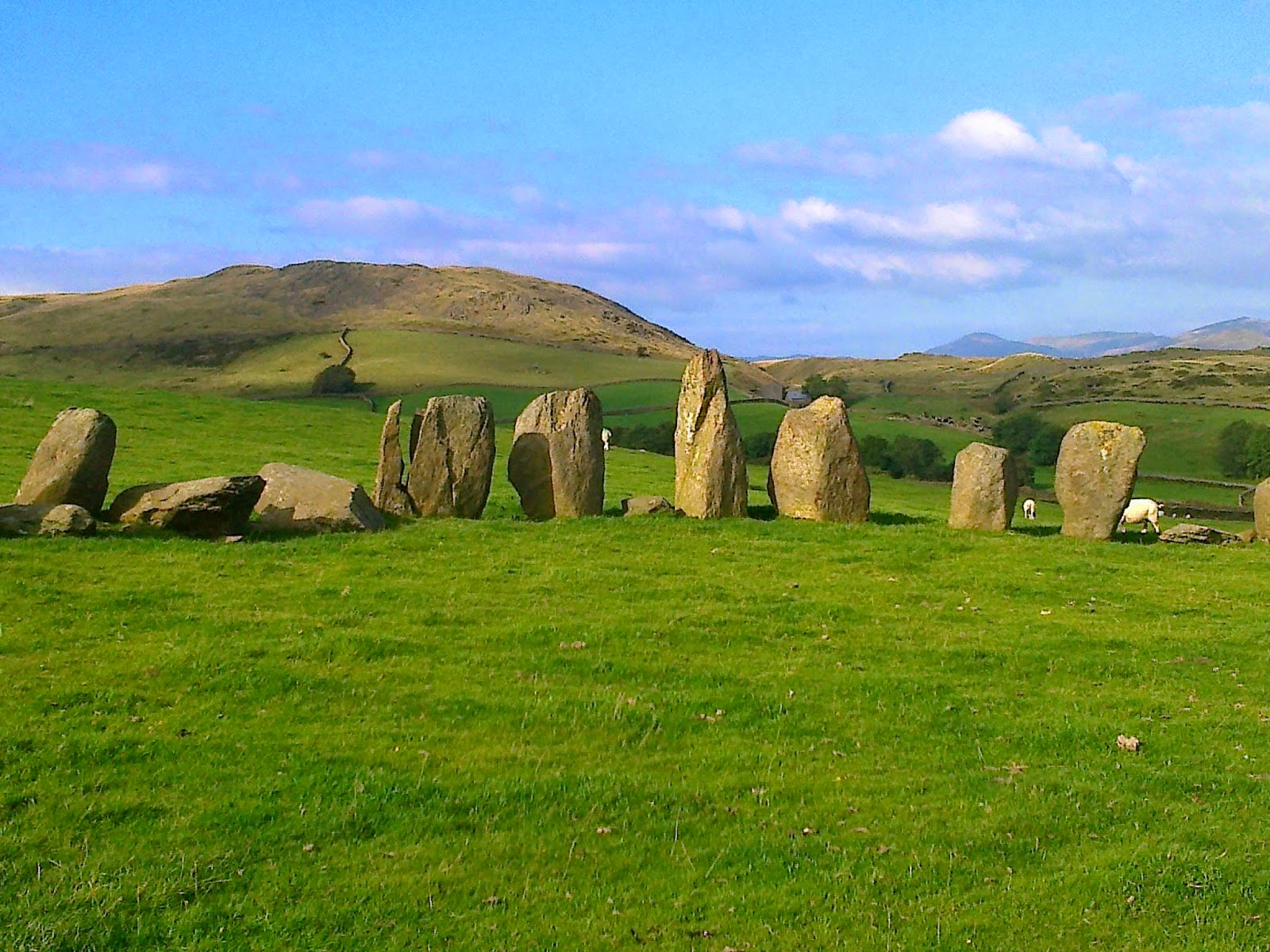 It even has a sort of  ceremonial porch on the southeastern side, a set of double stones flanking the entrance. 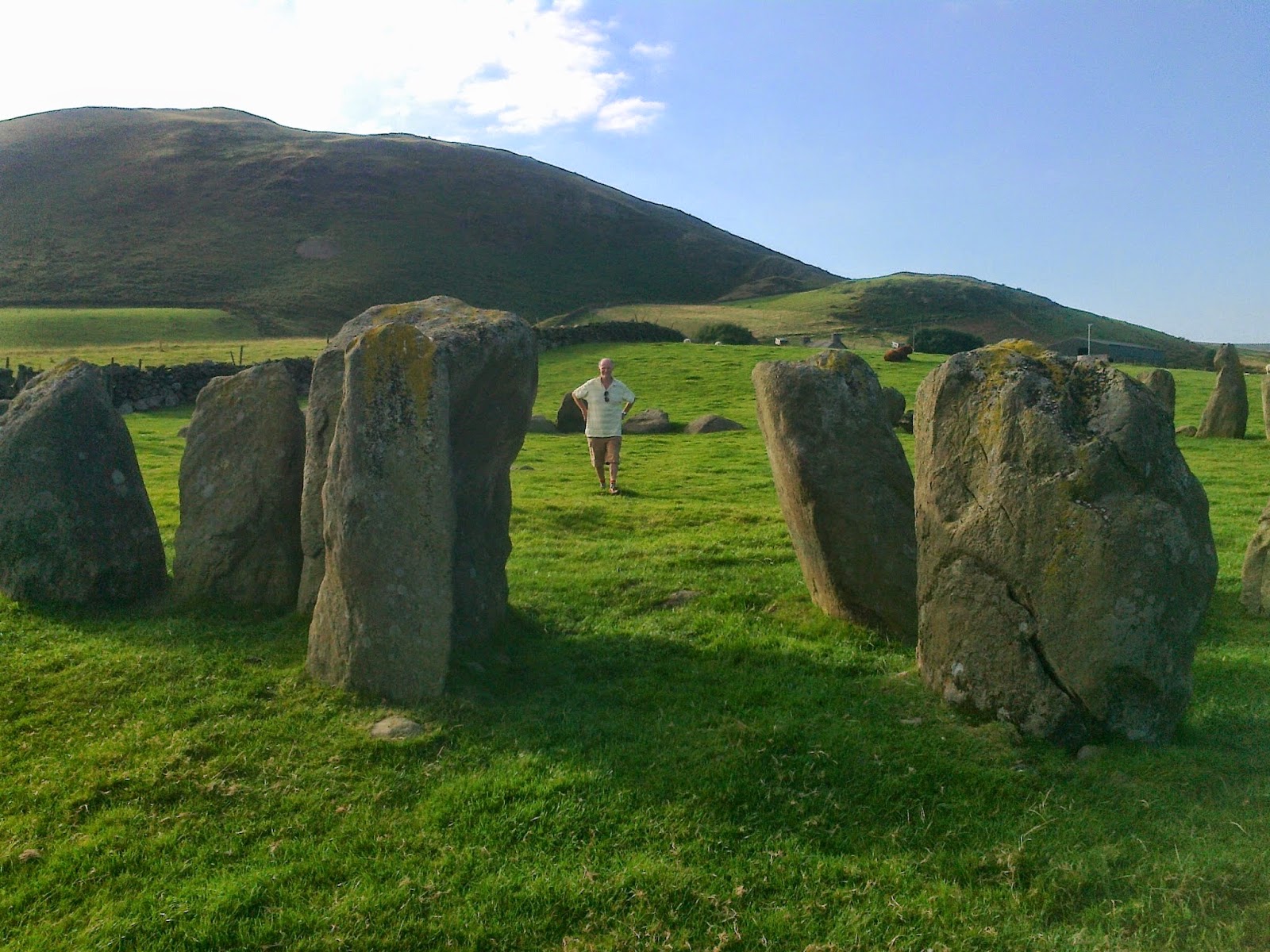 It was a beautiful, serene afternoon. The worn stones glowed in the late sunshine.  The circle was so complete, it felt as though the people who built and used it had only just gone away, instead of being dust for 5000 years. 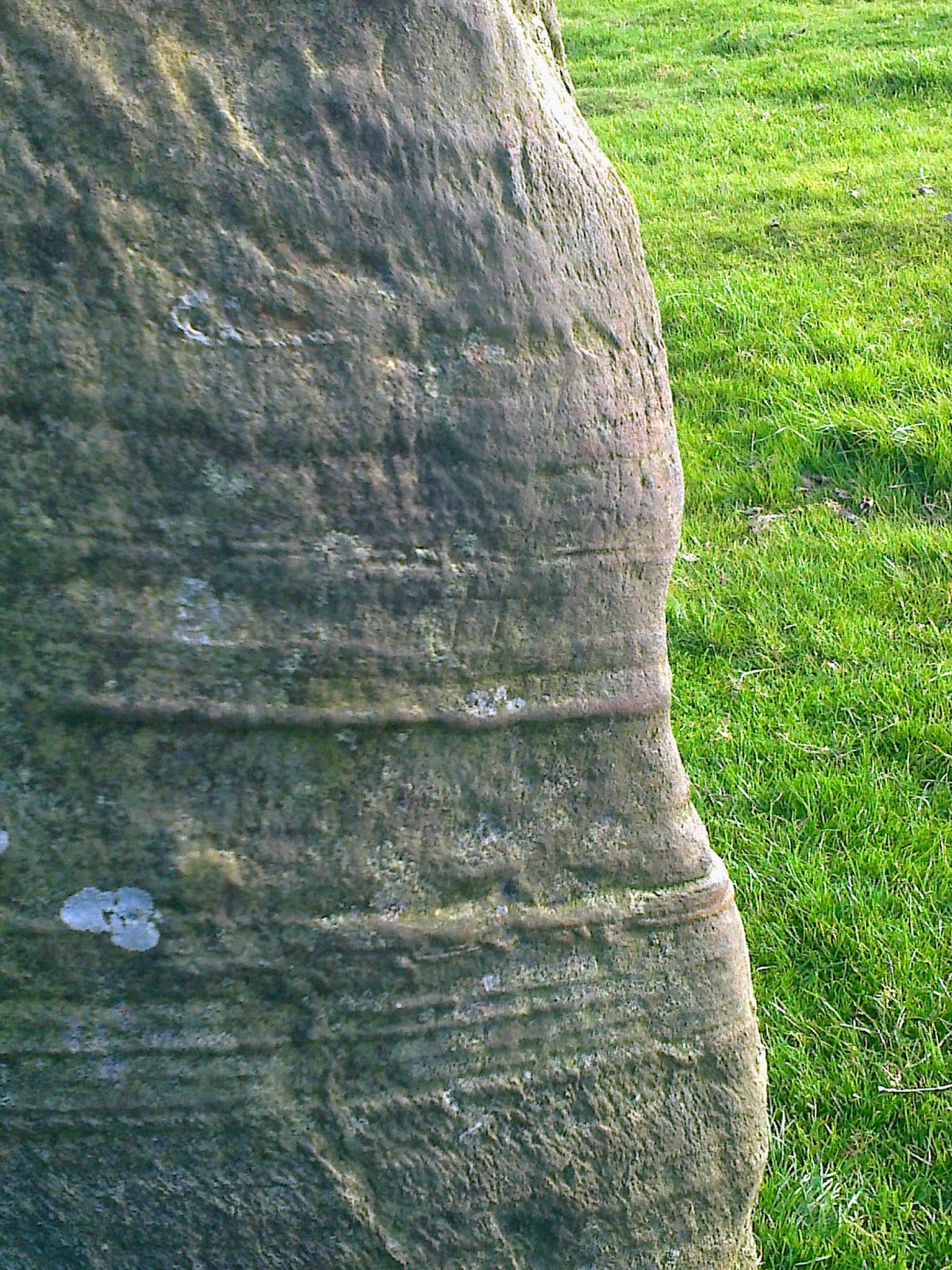 But who were they?  Why did they build it and what did it mean to them?  We have only the name Sunkenkirk, and a tale - for we will always tell tales - that it was built by the Devil, who busied himself at night in pulling down and removing the stones of a church which was being built in the day.  That's a new, young story, perhaps a hundred years old. We will never know what stories were told about this circle immediately after it was built, or through most of the rest of its long, long history.


In an essay called 'Burning Bushes' (from 'In Other Worlds: SF and the Human Imagination', Virago 2011), Margaret Atwood speculates on the value of art to early societies: that those who possessed


... such abilities as singing, dancing and – for our purposes – the telling of stories – would have had a better chance of survival than those without them. That makes a certain sense: if you could tell your children about the time your grandfather was eaten by a crocodile, right there at the bend of the river, they would be more likely to avoid the same fate. If, that is, they were listening.

Language and narrative are inextricable one from another.  Every sentence we speak lays a narrative template over experience and alters our perceptions.  In the beginning was the Word: we create our own worlds in our own images. If you can tell a ‘true’ story about the crocodile at the bend of the river, fiction and myth spring at once into existence.  Because you can tell another story, about how bravely your grandfather fought the crocodile (even if you weren't there yourself): and that leads almost inevitably to the question of where he is now - surely not mere crocodile food, but a hero in the world of ancestors, who passes his wisdom down to you and maybe speaks to you in dreams. 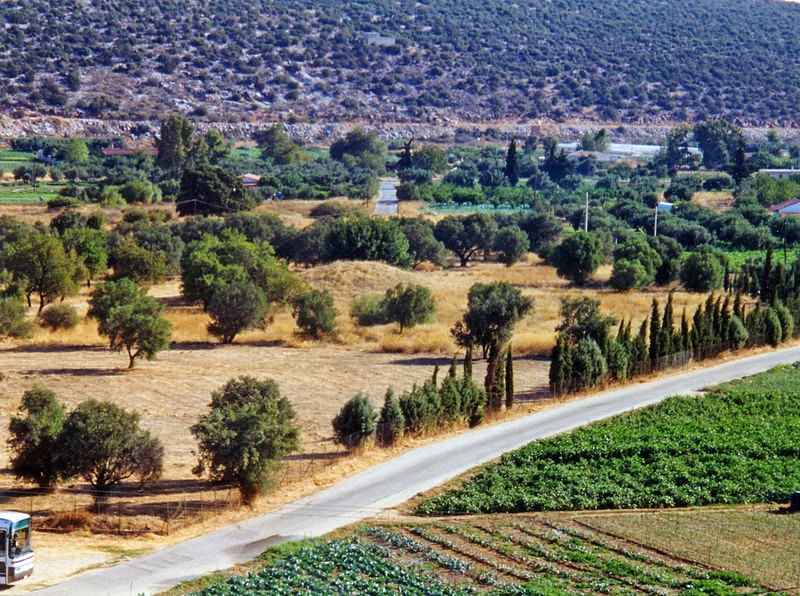 Some years ago I visited this grassy barrow.  There it is the in the middle of the photograph, looking just like so many I've seen in England: but we know who lies there, and who buried them, and when, and why.  It's the burial place of the Plataean forces who fought alongside the Athenians commanded by Miltiades, against the Persians under Darius, at the Battle of Marathon in 490 BC.  We know, because the story was written down. And knowing it sent prickles down my spine.

The battle of Marathon was written as history (though maybe not history as we conceive of it today) not too long after the events themselves.   'The Cattle Raid of Cooley' was only written down centuries after the events it purports to describe, after the oral tradition and mythification process, the business of turning fact into fiction, had got well under way.  Yet as in the tales of Troy and Knossos, some truths were preserved in the storytelling, like flies in amber.  But there are no such stories for Stonehenge, no hero tales from Sunkenkirk. And that's why, if I could travel back in time I'd still go to the the third millenium BC and visit them.

Because I want to know their story.