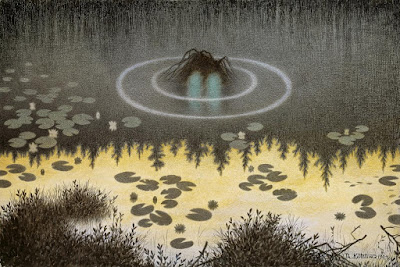 ‘A Strömkarl sings…’ One of the many strange creatures in Alan Garner's wonderful children's fantasy 'The Weirdstone of Brisingamen'  is the strömkarl which the children and the dwarfs hear playing on the Goldenstone as they emerge from the constrictive darkness of the Earldelving:

He was less than three feet high; his skin lustrous as a pearl; his hair rippling to his waist in green sea-waves. And the sad melody ran beneath his fingers like the song of water over pebbles.

Of course I didn't know, when I first read that as a child, that 'strömkarl' simply means 'river man'. He is one of the river-spirits of Scandinavia, who are as numerous and varied as the rivers themselves.  Strömkarls and Neckans often sing beautifully, or play on harps, and the latter is sometimes heard grieving that he will never have eternal life. The Neckan or Nökken has a tendency to call to people and lure them into the water. The River-horse or Bäck-hästen is similar to the Scottish kelpie: once you mount on his back, he will dash into the water and try to drown you. 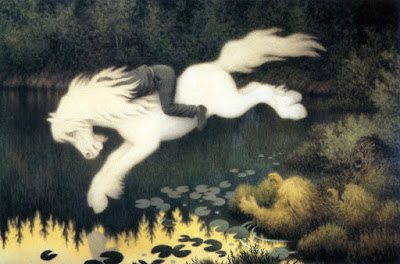 Fittingly, all these creatures are fluid: they shape-change. The Nök sometimes takes River-horse form, or may appear in the shape of a little, bearded man: the Strömkarl may assume the likeness of your lover or friend.

Like the trolls and the wood-fairies, the river-man belongs to the fallen angels, and like these he also desires to play wicked pranks on mankind, so he changes his shape at pleasure. A story is told of a young girl who engaged herself to an agreeable young man, and the two were in the habit of meeting beside a stream.  The river-man took advantage of this, put on the shape of her betrothed, and met the girl several times.  She found, however, that he behaved differently from his usual conduct, and complained to her parents.  These suspected mischief, and told her that the next time she met him, she should pretend to be very friendly with him, and so get out of him the way to protect herself against the river-man.  She took their advice, and he was foolish enough to say to her, that whoever carried on their person, ‘wall-stone, sausage-bone, and the white under ground,’ would be safe from him.  The girl then searched for a stone from a clay-covered house wall, a bone-splinter from a meat-sausage, and a garlic-root; these she carried about with her, and so put an end to his tricks.

The river-man plays music in the rivers and streams. His music is wondrously beautiful to hear, but dangerous to listen to, for one can lose their senses by standing and hearing the dance to the end. Many village musicians have been known,who have learned from him to play this elf-dance, and have sometimes played the first parts of it at Christmas parties and elsewhere. This might be done without any danger to themselves or to the dancers, but if the player had not sense enough to stop at the end of the third part, but began the fourth and last , then it was too late. At the third part both old and young danced like mad, but now the musician and tables and benches dances as well, and could not stop so long as life was in the people, unless someone from outside entered the room and cut all the strings of the violin across with a knife.


In one of the most famous stories, the river-man is rebuked by a passing priest who jeers at him, 'How can you play such music, knowing you have no soul? Sooner shall this stick of mine burst into flower than the Neckan receive God's mercy and eternal life.'  Weeping bitterly, the poor Neckan throws his harp aside: within a few paces, however, the priest's staff  bursts into sudden blossom and, shamed by the miracle, the priest confesses that God's mercy extends to all his creatures.  In this poem the Victorian poet Matthew Arnold (who seems to have loved Scandinavian folklore) imagines the Neckan's response. (Turning this particular Neckan into a Sea King who has married a mortal woman, Arnold has blended it with the ballad of Agnete and the Merman which inspired his long poem 'The Forsaken Merman'.)

In summer, on the headlands,
The Baltic Sea along,
Sits Neckan with his harp of gold,
And sings his plaintive song.

Green rolls beneath the headlands,
Green rolls the Baltic Sea;
And there, below the Neckan’s feet,
His wife and children be.

He sings not of the ocean,
Its shells and roses pale;
Of earth, of earth the Neckan sings,
He hath no other tale.

He sits upon the headlands,
And sings a mournful stave
Of all he saw and felt on earth
Far from the kind sea-wave.

Sings how, a knight, he wander’d
By castle, field, and town—
But earthly knights have harder hearts
Than the sea-children own.

Sings of his earthly bridal—
Priest, knights, and ladies gay.
“—And who art thou,” the priest began,
“Sir Knight, who wedd’st to-day?”—

“—I am no knight,” he answered;
“From the sea-waves I come.”—
The knights drew sword, the ladies scream’d,
The surpliced priest stood dumb.

He sings how from the chapel
He vanish’d with his bride,
And bore her down to the sea-halls,
Beneath the salt sea-tide. 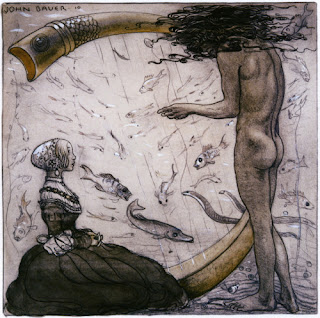 He sings how she sits weeping
‘Mid shells that round her lie.
“—False Neckan shares my bed,” she weeps;
“No Christian mate have I.”—

He sings how through the billows
He rose to earth again,
And sought a priest to sign the cross,
That Neckan Heaven might gain.

He sings how, on an evening,
Beneath the birch-trees cool,
He sate and play’d his harp of gold,
Beside the river-pool.

Beside the pool sate Neckan—
Tears fill’d his mild blue eye.
On his white mule, across the bridge,
A cassock’d priest rode by.

“—Why sitt’st thou there, O Neckan,
And play’st thy harp of gold?
Sooner shall this my staff bear leaves,
Than thou shalt Heaven behold.”—

But, lo, the staff, it budded!
It green’d, it branch’d, it waved.
“—O ruth of God,” the priest cried out,
“This lost sea-creature saved!”

The cassock’d priest rode onwards,
And vanished with his mule;
But Neckan in the twilight grey
Wept by the river-pool.

He wept: “The earth hath kindness,
The sea, the starry poles;
Earth, sea, and sky, and God above—
But, ah, not human souls!”

In summer, on the headlands,
The Baltic Sea along,
Sits Neckan with his harp of gold,
And sings this plaintive song. 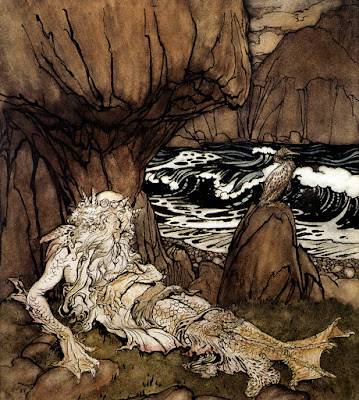 The Noekken or Nix by Theodor Kittelsen, Wikimedia Commons