The Cormorants of Andvær, by Jonas Lie 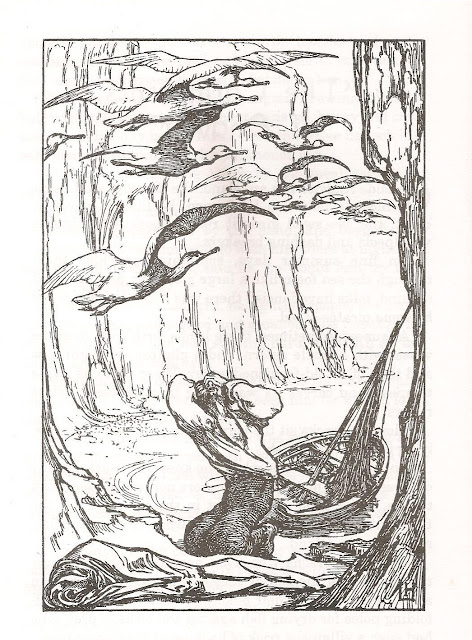 It's summertime... so here from the archives is a wonderfully eerie summer fairy tale by the 19th century Norwegian writer Jonas Lie.  Lie was a contemporary of Ibsen, born 1833 at Hvokksund, not far from Oslo; but he spent much of his childhood at Tromsø, inside the Arctic Circle.  He was sent to naval college, but poor eyesight made him unsuited for a life at sea, so he became a lawyer and began to write and publish poems and novels which reflected Norwegian life, folklore and nationalism.

I haven't been able to find any of Lie’s novels: most don’t seem to have been translated into English.  But I do have a collection of his reworkings of Norwegian and Finnish legends about the sea.  It’s called 'Weird Tales from Northern Seas'.  My edition was published in English in 1893 and consists of eleven short stories cherry-picked from a volume called ‘Trold’- 'Trolls' - and another called 'Fortaellinger og Skildringer ', which means something like 'Tales and Depictions, or 'Stories and Portrayals' (translations courtesy of the Bookwitch).  How I wish I could read the others.
I do not know how close these stories are to original folk-tales, though some strike me as very close in spirit.  Even in translation I find them powerful and beautiful, marvellously told.  I was reading this collection while writing the second of my ‘Troll’ books: one of his stories, ‘The Fisherman and the Draug’, was part of the inspiration for the malevolent ghosts which haunt the fisherman Bjørn in my own book. The one I want to share today is called ‘The Cormorants of Andvær’ – eldritch, mournful and beautiful. Tell me what you think of it, how it affects you. I am sure it will affect you. It’s such a strange tale…

Outside Andvær lies an island, the haunt of wild birds, which no man can land upon, be the sea never so quiet; the sea swell girds it round about with sucking whirlpools and dashing breakers.

On fine summer days something sparkles there through the sea-foam like a large gold ring; and, time out of mind, folks have fancied there was a treasure there left by some pirates of old.

At sunset, sometimes, there looms forth from thence a vessel with a castle astern, and a glimpse is caught now and then of an old-fashioned galley.  There it lies as if in a tempest, and carves its way along through heavy white rollers.

Along the rocks sit the cormorants in a long black row, in wait for dog-fish.

But there was a time when one knew the exact number of these birds.  There was never more nor less of them than twelve, while upon a stone, out in the sea mist, sat the thirteenth, but it was only visible when it rose and flew right over the island.

The only persons who live near the Vær at winter time, long after the fishing season was over, was a woman and a slip of a girl.  Their business was to guard the scaffolding poles for drying fish against the birds of prey, who had such a villainous trick of hacking at the drying-ropes.

The young girl had thick coal-black hair, and a pair of eyes that peeped at folk so oddly. One might almost have said that she was like the cormorants outside there, and she had never seen much else all her life.  Nobody knew who her father was.

Thus they lived till the girl had grown up.

It was found that, in the summer time, when the fishermen went out to the Vær to fetch away the dried fish, that the young fellows began underbidding each other, so as to be selected for that special errand.

Some gave up their share of the profits, and others their wages, and there was a general complaint in all the villages round about that on such occasions no end of betrothals were broken off.

But the cause of it all was the girl out yonder with the odd eyes. For all her rough-and-ready ways, she had something about her, said those she chatted with, that there was no resisting. She turned the heads of all the young fellows; it seemed as it they couldn't live without her.

The first winter a lad wooed her who had both house and warehouse of his own.

“If you come again in the summertime, and give me the right gold ring I will be wedded by, something may come of it,” said she.

And sure enough, in the summertime the lad was there again.

He had a lot of fish to fetch away, and she might have had a gold ring as heavy and as bonnie as her heart could wish for.

“The ring I must have lies beneath the wreckage, in the iron chest, over at the island yonder,” said she; “that is, if you love me enough to dare fetch it.”

But then the lad grew pale.

He saw the sea-bore rise and fall out there like a white wall of foam on the bright summer day, and on the island sat the cormorants sleeping in the sunshine.

“Dearly do I love thee,” said he, “but such a quest as that would mean my burial, not my bridal.”

The same instant the thirteenth cormorant rose from his stone in the misty foam and flew right over the island.

Next winter the steersman of a yacht came a wooing.  For two years he had gone about and hugged his misery for her sake, and he got the same answer.

“If you come again in the summer time and give me the right gold ring I will be wedded with, something may come of it.”

Out to the Vær he came again on Midsummer Day.

But when he heard where the gold ring lay, he sat and wept the whole day till evening, when the sun began to dance north-westward into the sea.

Then the thirteenth cormorant arose, and flew right over the island.

There was nasty weather during the third winter.  There were manifold wrecks, and on the keel of a boat, which came driving ashore, hung an exhausted young lad by his knife-belt.

But they couldn’t get the life back into him, roll and rub him about in the boathouse as they might. Then the girl came in.  “’Tis my bridegroom!” said she. And she laid him in her bosom, and sat with him the whole night through, and put warmth into his heart.

And when the morning came, his heart beat.  “Methought I lay betwixt the wings of a cormorant, and leaned my head against its downy breast,” said he.

The lad was ruddy and handsome, with curly hair, and he couldn’t take his eyes away from the girl.

He took work upon the Vær.  But off he must be, gadding and chatting with her, be it never so early and never so late. So it fared with him as it had fared with the others.

It seemed to him that he could not live without her, and on the day when he was bound to depart, he wooed her.

“Thee I will not fool,” said she.  “Thou hast lain on my breast, and I would give my life to save thee from sorrow.  Thou shalt have me if thou wilt place the betrothal ring upon my finger; but longer than the day lasts thou canst not keep me.  And now I will wait, and long after thee with a horrible longing, till the summer comes.”

On Midsummer Day the youth came thither in his boat all alone.

Then she told him of the ring that he must fetch for her from among the skerries.

“If thou hast taken me off the keel of a boat, thou mayest cast me forth yonder again,” said the lad.  “Live without thee I cannot.”

But as he laid hold of the oars in order to row out, she stepped into the boat with him and sat in the stern.  Wondrous fair was she!

It was beautiful summer weather, and there was a swell upon the sea: wave followed upon wave in long bright rollers.

The lad sat there, lost in the sight of her, and he rowed and rowed till the insucking breakers roared and thundered among the skerries; the groundswell was strong, and the frothing foam spurted up as high as towers.

“If thy life is dear to thee, turn back now,” said she.

“Thou art dearer to me than life itself,” he made answer.  But just as it seemed to the lad as if the prow were going under and the jaws of death were gaping wide before him, it grew all at once as still as a calm, and the boat could run ashore as if there was never a billow there.

On the island lay a rusty old ship’s anchor half out of the sea.

“In the iron chest which lies beneath the anchor is my dowry,” said she. “Carry it up into thy boat and put the ring which thou seest on my finger. With this thou dost make me thy bride. So now I am thine till the sun dances north-westwards into the sea.”

It was a gold ring with a red stone in it, and he put it on her finger and kissed her.

In a cleft on the skerry was a patch of green grass.  There they sat them down, and they were ministered to in wondrous wise, how he knew not nor cared to know, so great was his joy.

“Midsummer Day is beauteous,” said she, “and I am young and thou art my bridegroom.  And now we’ll to our bridal bed.”

So bonnie was she that he could not contain himself for love.

But when night drew nigh, and the sun began to dance out into the sea, she kissed him and shed tears.

And all at once it seemed to him as if she were becoming older and older and fading right away.

When the sun went below the sea-margin there lay before him on the skerry some mouldering linen rags and nought else.

Calm was the sea, and in the clear Midsummer night there flew twelve cormorants out over the sea.

Picture credits:
'The Cormorants of Andvær' by Laurence Housman
Posted by Katherine Langrish at 01:05