There are extraordinary numbers of superstitions about shoes - though most are now unfamiliar to us 21st century mortals.  According to Iona Opie and Moira Tatem’s ‘Dictionary of Superstitions’, an old shoe hung up at the fireside was thought to bring luck. You turned your shoes upside down to prevent nightmares or to stop a dog from howling; it was unlucky to put your right shoe on before your left; burning a pair of old shoes could prevent children from being stolen by the fairies; bad luck was bound to follow if a pair of new shoes was placed upon a table -- and so on and on. In fact, shoes have often been often hidden within the fabric of buildings, possibly as apotropaic charms to ward off evil. 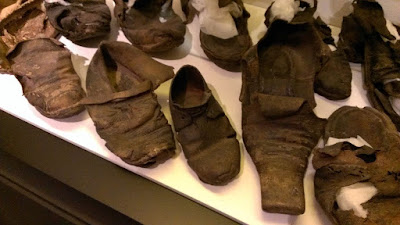 The shoes are usually found not in the foundations but in the walls, over door lintels, in rubble floors, behind wainscoting, under staircases…  shoes occur singly or with others, very rarely in pairs, occasionally in ‘families’ – a man’s, woman’s, and a range of sizes of children’s. Sometimes they are found with other objects – a candlestick, wooden bowl or pot, wine glass, spoon, knife, sheath, purse, glove, pipe… The condition of the shoes, like the objects found with them, is usually very poor: worn out, patched, repaired. 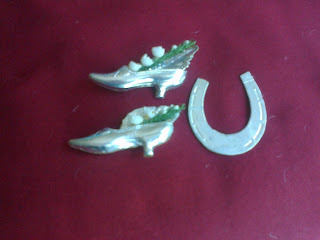 
Shoes are very personal items. They literally mould themselves to the shape of an individual’s foot. Anyone who’s sorted through the clothes of someone who’s died will know how the sight of a pair of their empty shoes is especially poignant. It’s as if well-worn shoes have almost become part of the person. Perhaps that’s why, as the folklorist Sabine Baring-Gould writes in his 1913 ‘Book of Folk-Lore’ :

…when we say that a man has stepped into his father’s shoes, we mean that the authority, position and consequence of the parent has been transferred to his son.

… is said to be the tomb of a courtesan, built by her lovers, and whose name, according to Sappho the poetess, was Doriche. She was the mistress of her brother Charaxus, who traded to the port of Naucratis with wine of Lesbos. Others call her Rhodopis.

A story is told of her, that, when she was bathing, an eagle snatched one of her sandals from the hands of her female attendant and carried it to Memphis; the eagle soaring over the head of the king, who was administering justice at the time, let the sandal fall into his lap. The king, struck with the shape of the sandal, and the singularity of the accident, sent over the country to discover the woman to whom it belonged. She was found in the city of Naucratis, and brought to the king, who made her his wife. At her death she was honoured with the above-mentioned tomb. 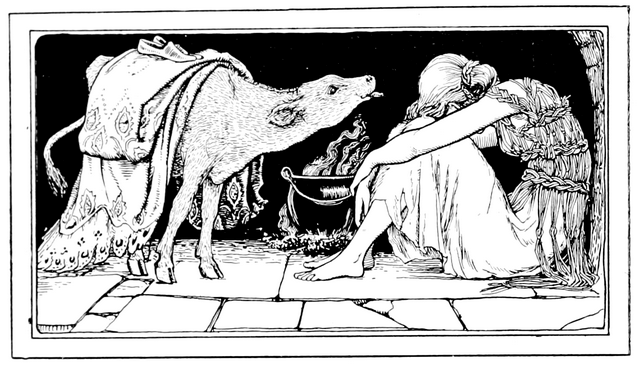 And well he might: the fitting of the shoe may actually have been part of the ceremony.  The folklorist Sabine Baring-Gould wrote in 1913:

What did it mean?  Perhaps many things. If it was traditional for the bridegroom to place new shoes on the bride’s feet, it’s possible he was asserting authority over her, especially since Baring-Gould goes on to add that ‘A harsher way … was for him to tread hard on the bride’s foot, to show that he would be master.’  (There are times when one feels that folk-customs aren’t so charming after all. Hum.) Baring-Gould says,  ‘When in the Psalm [Psalm 60] the expression occurs, ‘Over Edom have I cast out My shoe’, the meaning is that Jehovah extended His authority over Edom.’ So a shoe could be a symbol of dominance, of trampling on someone. But in ‘The Lore and Language of Schoolchildren’ Iona and Peter Opie write, ‘When anyone receives a pair of new shoes the custom is to stand on her toes for luck.’  As with most of human nature and culture, it’s all in the interpretation.

The young man kneeling in front of his bride, touching her ankles as he slides new shoes on to her feet – you don’t have to be a died-in-the-wool Freudian to see something sexy about that, and I bet quite a few young couples enjoyed the frisson of – finally! – permitted, public, personal contact.  But I think there’s more to it.  A very long and complicated Irish tale ‘The King Who Had Twelve Sons’ contains the Cinderella ‘lost shoe’ motif, but the roles are reversed and it’s the princess who tugs the hero’s boot off as he rides past.  Taking on what we tend to think of as the male role in this story type, she proclaims ‘a gathering of all the men in the three islands that she might see who the man was whom the shoe fitted’.  In this case too, as soon as the hero arrives, ‘The shoe was in her hand, and it leaped from her hand till it went on his foot. "You are the man that was on the pony the day that he killed the piast," the princess proclaims, "and you are the man whom I will marry."’

What chopines said about Zozolla though -- I don't know! 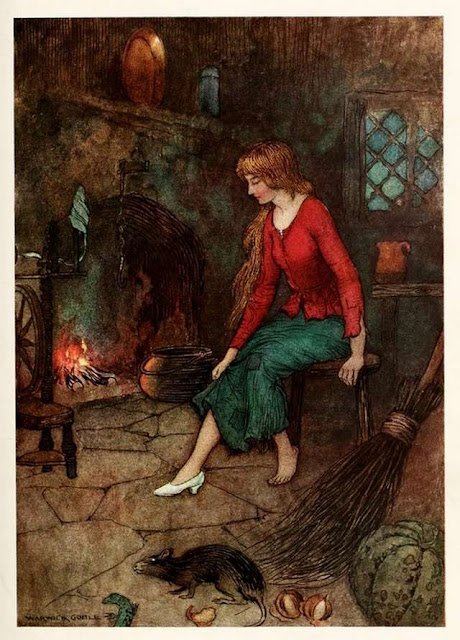 Cinderella, by Warwick Goble
Posted by Katherine Langrish at 07:01