"Christmas with the Savages" by Mary Clive 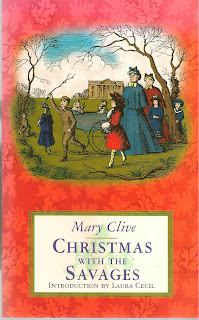 It’s December already, and – scary thought – only two weeks to Christmas. So I’m not going to trouble you with a long post. If you're anything like me, you’re far too busy rushing around. Instead let me recommend a book which almost anyone should like – uncles, aunties, grandmothers, children. It is ‘Christmas with the Savages’ by Mary Clive (that's Lady Mary Clive to you and me), originally published in 1955 but written much earlier. Born in 1907, she lived to the age of 102, and this warm, lively and extremely funny book is a lightly fictionalised child’s-view of a pre-Great War Christmas in a big house, ‘based on the vast family gatherings of her maternal grandmother’.  You can find Mary Clive’s interesting obituary here: https://www.theguardian.com/books/2010/apr/22/lady-mary-clive-obituary

‘Christmas with the Savages’ is as easy to read and as witty as anything by Edith Nesbit, but the children, ‘the Savage family’, are way more badly behaved than any well-meaning Wouldbegood. Though certainly not wicked, they bicker, squabble, tease one another and torment their nurses in a way both horrifying but understandable: these children are being brought up, not by their parents, but by servants who have no real authority over them. I suppose their often very naughty behaviour was one way of attracting attention – the ‘spoilt’ older boy Lionel is, we learn, miserable at his boarding school. No wonder he acts up in the Christmas holidays. ‘Can no one control that boy?’ cries one of the nurses as Lionel is ejected from the nursery tea-table after teasing his cousin Peter. Then:

The nursery maids rose from their places and chased him out, but as fast as they slammed one door behind him he rushed in at another. There were no keys, and he tore through the room again and again, the nursery maids trying to hold the doors but never knowing which he was about to attack next.  In the middle of the uproar, and just as Lionel had thrown a cushion into the midst of the food, there came a heavy knock on the door which led into the passage.

Lionel hides under the table, and in comes ‘Father Christmas’. The children blanch. Is it Mr O’Sullivan dressed up? Or could it be really...?

Father Christmas now raised his hand and began counting the children in a queer deep voice. ‘One, two, three, four, five, six, seven, eight, nine, ten ... ten?’ Here he stopped. As Lionel was under the table of course we were one short. ... Father Christmas pronounced in a slow, solemn voice:
'The child under the table,
I give you fair warning,
Will find nothing in his stocking
On Christmas morning.'

Quenched by this awful threat, Lionel emerges and ‘slunk on to his chair’, after which Father Christmas slips away. Needless to say, presents do appear for Lionel on Christmas Day. It seems that at least there were some imaginative uncles around...

The children fight, show off to one another, explore forbidden attics, set off fire extinguishers, paint pictures and write stories. At half-past six on Christmas morning, however, they all congregate in a single bedroom to open their stockings together, and they’re as reluctant as most children are to write the dreaded thank-you letters – especially Betty, the enfant terrible (based on Mary Clive herself):

Betty’s godmother had sent her a postal order for 5 shillings with a letter saying she was afraid it would arrive late for Christmas. As a matter of fact it had come on Christmas Eve, and Betty had got into one of her contrary moods and said that she wouldn’t accept it.
‘If I write a letter, will you put “Love from Betty” at the bottom?’ said her mother.
‘No,’ said Betty. ‘I’ll put “Hate from Betty”.’
‘It’s no good,’ said Harry. ‘Nothing will make her change her mind now. But I’ll write “Love from Betty” all blotchy, and her godmother won’t know the difference.’
‘If you do,’ said Betty, ‘I’ll throw your bedroom slippers into the fire.’


Take my advice and buy ‘Christmas with the Savages’ for all your friends and relations. You won’t regret it.

Posted by Katherine Langrish at 05:05