The Night She Dreamed of Being a Dental Assistant

I won't even go into what else has been happening in the past week, but two notable things occurred in the world of science. Firstly a Cern physicist, Alessandro Strumia – who really looks young enough to know better – was suspended for making the deliberately provocative claim that "physics was invented and built by men”, that "men prefer working with things and women prefer working with people" and that there is "a difference even in children before any social influence" can take place. The lofty heights of physics, he implies, are not for women.


Secondly, in one of those serendipitous coincidences, the Nobel Prize in Physics was awarded to a woman for the first time in 55 years. Canadian physicist Donna Strickland is only the third woman winner of the award, along with Marie Curie, who won in 1903 and of whom presumably even Professor Strumia may have heard – and Maria Goeppert-Mayer, a theoretical physicist who was awarded the prize in 1963 for proposing the nuclear shell model of the atomic nucleus.

Let me show you something. 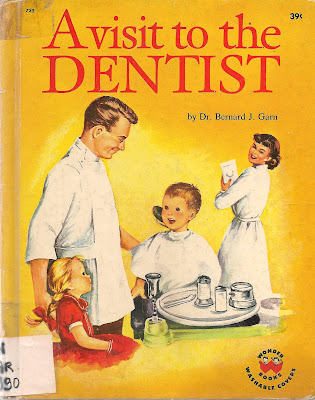 I’ve been saving this horror up for some time. It’s an educational ‘Wonder Book’ for children, published in the USA in 1959 with the laudable intention of reducing the childhood terror of going to the dentist. It’s full of cosy, colourful pictures and there is a total lack of any drama. As a nine-year old kid who once leaped out of a car to avoid a visit to the dentist, hid from my parents in bushes in a park and subsequently caught the bus home on my own, I can appreciate this aim… but let us follow Kathy and Clifford on their adventure. 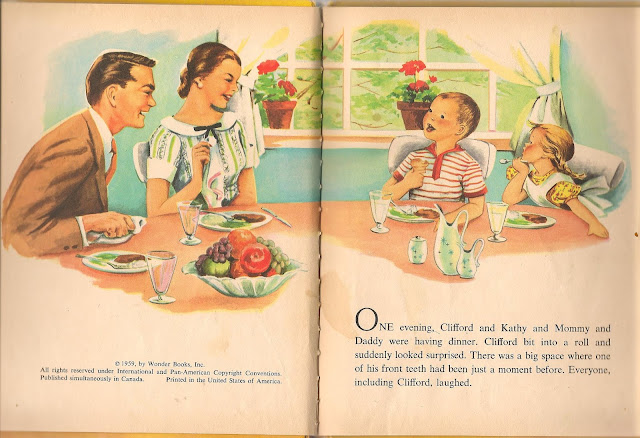 On page one, Clifford – who looks about six – loses a front tooth. ‘Everyone, including Clifford, laughed.’ This is only a baby tooth, but it prompts Daddy to tell Clifford he should put the tooth under his pillow, ‘and maybe there will be a present there in the morning’. (There will be a shiny new dime, though no mention of anything frivolous like tooth fairies). And Mommy remembers, ‘It’s time we saw Dr Moyers to have Clifford’s teeth checked. It would be a good idea to have Kathy’s teeth checked too.’ Notice how Kathy is an afterthought and everyone is looking at Clifford. Everyone looks at Clifford on the cover illustration too. And below, Kathy looks on as Clifford discovers his dime... 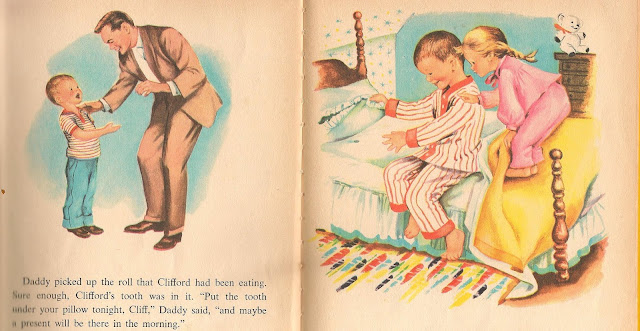 A week later, the children and Mommy arrive at the dentist’s. “Who is this pretty little girl?’ asks dental assistant Miss Turner. “This is my daughter Kathy,” says Mommy. “She is three years old and Dr Moyers is going to examine her teeth too.” Even though Kathy is for once the subject, in the picture Clifford is still the focus of attention. His hand is out, and since he is speaking to Miss Turner, it appears very much as though she is looking at him while Kathy stares up, dumb. 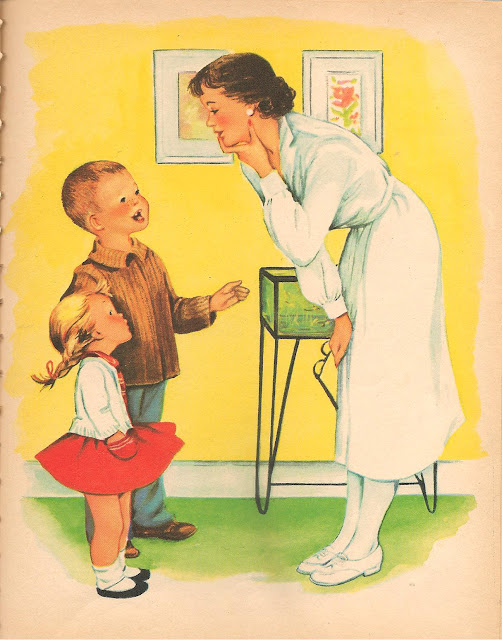 Miss Turner wears no glasses to greet the children, but she has to put them on for work, no matter whether close-up or distant – because wearing glasses makes a woman look serious. Here she is in one of only three pictures in the book in which Kathy is the focus. Even then it's not entirely clear whether she's looking at Kathy, or her notes. 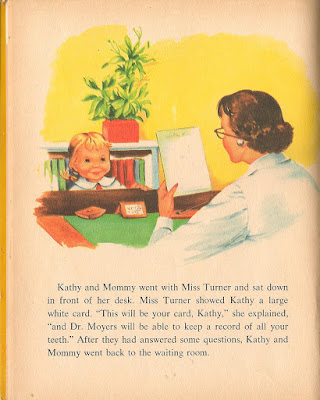 Clifford is the first to go in. He sees ‘a bright sparkling room with all kinds of wonderful machines.’ American hero Dr Moyers smiles and shakes hands with Clifford in a man-to-man fashion. ‘Sit down in the chair,’ he says, ‘and I’ll give you a ride.’ Clifford climbs into the chair with a giggle, ‘pretending that he was about to blast off in a space ship.’ 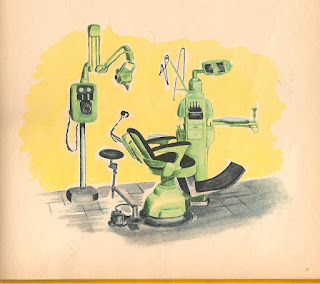 In the next few pages, Dr Moyers carefully explains to Clifford everything he is doing. He finds a small cavity.  Then he asks Miss Turner to take an X-ray or six, finds a second cavity and decides to remove two more baby teeth to allow Clifford’s adult teeth to grow straight. He gives Clifford advice on dental hygiene. Miss Turner mixes the dental cement. In the left-hand picture, below, the 'space' references are clear. The X-ray pictures look like an antenna while Clifford is the astronaut in his chair. 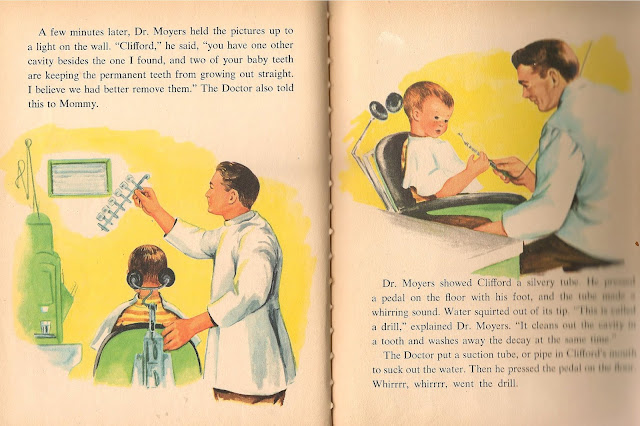 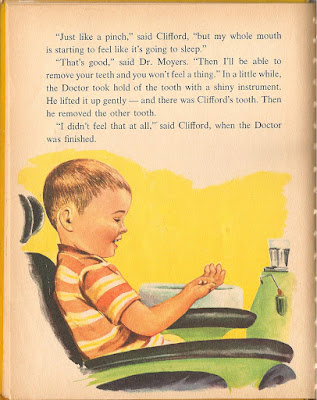 Now it’s Kathy’s turn. Although she’s only three, Dr Moyers still takes X-rays of her teeth, but they are perfect (at three years old you’d hope so), so all he needs to do is polish them. 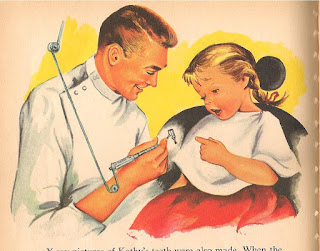 Kathy doesn’t fantasise about space ships or notice shiny machinery, but she does wish she had a ‘toothbrush with a motor’ at home. Dr Moyers provides more good advice on daily dental hygiene (‘Brush your teeth in the morning, then right after meals and before you go to sleep’) and the children trot off, happy to have been given new toothbrushes and medals ‘for being good patients.’ Notice how the artist makes Clifford look straight at the reader with a cheerful gappy grin. Kathy admires her good conduct badge with sweet expression and lowered eyes. 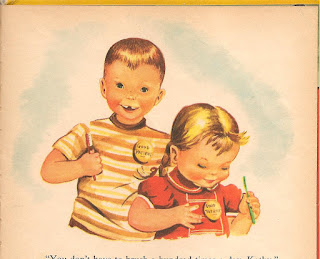 Though this book does a good job of carefully explaining dental procedures to children, it is very much of its time. The thing that really gets me, though - and the reason I feel this book is pernicious - comes on the last page where we see the children snuggled up in bed after their adventurous day,  Clifford in the foreground, of course. “That night,” the story continues:

That night, Kathy dreamed she was a dental assistant. She helped with the X-rays and developed the pictures. She mixed cement and silver for the fillings. She got the instruments ready for the Doctor. 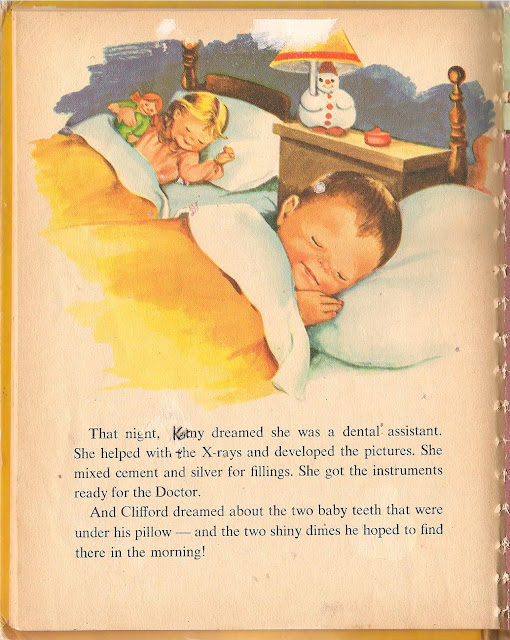 "She got the instruments ready for the Doctor." This is a book in which the little boy is older, the little girl younger. The boy sees exciting shiny machinery and imagines himself a spaceman. The little girl imagines herself a dental assistant. The boy has to be brave, have teeth drilled and extracted, is rewarded with dimes. The little girl follows in her brother’s footsteps and nothing particular interesting happens to her. The insidious, subliminal message would have sunk into the perceptions of children of both sexes, manipulating, and in the case of girls limiting, their expectations.

The book is nearly sixty years old. I feel sure the people who put it together felt fine about suggesting ‘dental assistant’ instead of ‘dentist’ as a possible career for a girl, even though women had been getting medical degrees in the States for 110 years already, ever since Elizabeth Blackwell's in 1849. They didn't see that. It wasn't relevant. Even on the cover, the male Doctor is in the foreground, his attractive female assistant remains in the background, smiling and supportive. This was the kind of myopic cultural fog in which most women over the age of fifty grew up and its effects are quite clearly still with us. The events of this week along with many another - just yesterday I heard a Conservative Party donor, Lord Ashcroft, speak unthinkingly of  'the voter and his family' - show how far we still have to travel. For it's certain that Lord Ashcroft is not alone in thinking of a voter as a man. A man and his vote, a man and his family.

Posted by Katherine Langrish at 02:53