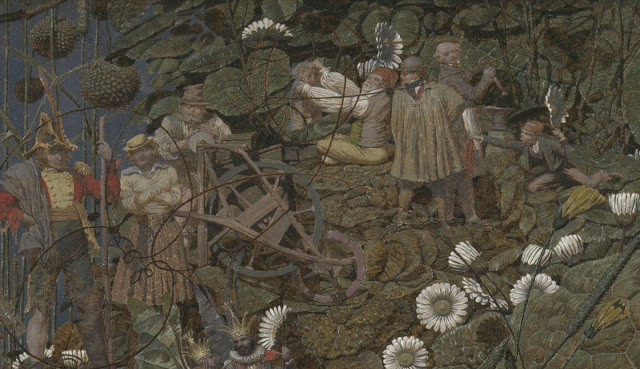 This haunting story is a Romany tale collected and translated by John Sampson (1862 – 1931). Sampson was a self-taught linguist, scholar and printer, and librarian of University College, Liverpool. On a walking tour near Bala in the late 1900s he encountered and was befriended by members of the Wood clan, descendents of the eighteenth century ‘King of the Gypsies’ Abram Wood, and speakers of Welsh-Romani: ‘a quite pure, inflected Romani dialect’ which became his principal study. Edward’s brother Matthew, and his four sons, told Sampson many folktales some of which were published by the Gypsy Lore Society.

“The Three Sisters” is a tale bathed in a sinister half-light as one after another, the sisters journey to the land ‘where the devil never wound his horn and the cock never crew,’ and white stones glimmer in an eternal dusk. The old woman in the red cloak and her brother in the red jerkin are clearly powerful fairies – red is a dangerous, fairy colour – and the gate leading to the hill, through which each has to pass, suggests it is an entrance to the Otherworld. At the end of the story, the youngest sister triumphs because she has, significantly, taken the initiative from the fairy man by speaking to him first, which enables her to ignore the cries of the white stones. She then supplants the woman in the red cloak as ruler of the fairy kingdom but still takes care to address her as 'good aunt': she has learned that you shouldn't offend the fair folk.

This tale and others can be found in  “XXI Welsh Gypsy Tales” by John Sampson, (Gregynog Press, 1933)

There was a cottage, and there lived in this cottage an old man and his wife. They had three children, and these children were three little sisters. And they dwelt there summer after summer until their father and mother died.

And two summers after their father and mother died, there came to the cottage a little old woman who wore a red cloak. And she went to the door and begged for a cup of tea. “No,” said the eldest sister, “we have not enough for ourselves.” “I will bind thy head and thine eyes, if I bind not thy whole body,” said the crone to her. With that she departed.

And now these three sisters grew poor. And one day the eldest sister said to the two others, “I am going to seek work somewhere. And do you three stay here to look after the house. But if ye see the spring dried up and blood in the ladle, some evil has befallen me. Come then, one of you, in search of me.” And so in the morning when they arose they used to look for the tokens of which their elder sister had spoken.

Let us leave the two younger sisters for a while and follow the eldest one.

The eldest sister journeyed to where the devil never wound his horn and the cock never crew. Night fell. Presently she saw a little man in a red jerkin. This little red-jerkined fellow was brother to the old woman of the red cloak. And before the girl asked aught of him, he put a question to her. “Art thou seeking work?” “Yes,” replied the girl.

Little Red Jerkin gave her no hint of the trial that lay before her. He opened a gate. “Go up there and thou wilt get work!”

And up she climbed. There were little white stones all the way up the hill. “Stop and look!” cried one white stone. The girl stopped and looked at the stone. She was bewitched into a trance and transformed into a white pebble. Thus did old Red Cloak bind her head and her eyes with a spell. And now she has bound her whole body.

Let us leave her there and return to the two younger sisters.

One morning the second sister arose and ran to the door to look. She opened the door and there was the spring dried up and blood in the ladle. Horror overwhelmed her when she beheld these things. “Some evil has befallen my sister,” she cried to the youngest girl. Then the spring flowed and the ladle was bright again. Now she, in her turn, said to her younger sister, “If thou seest the spring dried up and blood in the spoon, some misfortune has overtaken me. Come then and seek for me.”

Let us leave the youngest girl now and follow her who set out in search of the eldest sister.

She journeyed to where the devil never blew his horn and the cock never crew, until she met this same man in the red jerkin.  And before she could utter a word to him, Red Jerkin spoke. “Art thou looking for work?” asked he. “No,” answered the girl, “I am looking for my sister.” “Thy sister is up yonder; she has found work, and is doing well.”

The gate was opened and the girl climbed the hill. “Stop!” cried one white stone. The girl did not pause, but went straight on. “Look!” called another stone. The girl went on. “Lo! here is thy sister,” cried a third stone. She stood still and looked around when she heard this news about her sister. And she was bewitched into a magic trance and transformed into a white pebble.

Let us return now to the youngest sister who was at home.

She arose one morning and went to the door and opened it. There was no water in the spring; it was dried up. There was blood in the ladle! Then the youngest sister burst into tears.

And she journeyed to where the devil never wound his horn and the cok never crew, until she met the little fellow in the red jerkin. Before he could open his mouth, the youngest sister spoke to him. She got in the first word. She asked him about work. “Yes, there is work for thee.” His heart was well-nigh broken, because the maiden had got in the first word.

He opened the gate and the girl climbed the hill. As she climbed, one white stone called to her, “Stop!” The girl went on. “Look!” cried a second stone. “This is the place!” cried a third stone. The maiden was quite fearless. She paid no heed to them. “Lo! here are thy two sisters,” cried yet another stone.

“Kiss them, then,” quoth she. And on she sped until there were no more stones and she reached the little old woman in the red cloak.

When Red Cloak saw the girl she fell on her knees. “Hast thou found me then, little lady?” “I have,” quoth the little lady.

And now, lo and behold! all that slumbrous spell was broken. And all these white stones were restored to their former shapes. It was this maiden who had broken the whole enchantment: the dear God had put in into her heart to achieve all this and to have no fear.

And she went to her two sisters and led them up to the old woman in the red cloak. “Here are my tow sisters,” said she. “I know them,” answered Red Cloak. “but it is thou who art mistress here now. All is left in thy hands. Do as thou wilt.” “I thank thee, good aunt.”

Red Cloak showed the youngest sister where all the treasure was. Then the girl gave her two sisters a bagful each, and charged them to send her word if any mischance should ever again befall them. And they both fell on their knees before their youngest sister. They were escorted home.

And she became the greatest lady in all that land, far and wide, and she married Red Jerkin. And they live there happily to this day. 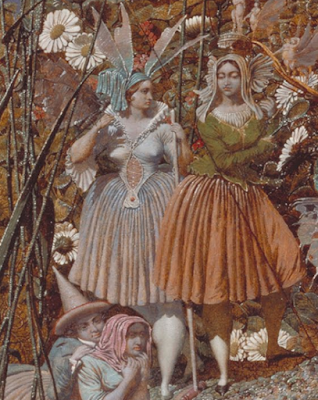 More on fairy tales and folklore in my book "Seven Miles of Steel Thistles" available  here and here.