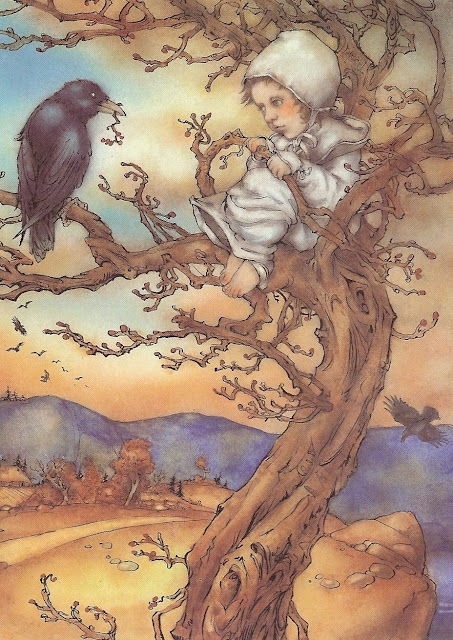 This sweet story is one of the Grimms’ ‘Children’s and Household Tales’. translated by Margaret Hunt in 1884. The Grimms note that it comes “from the district of Schwalm in Hesse. It is also told that the cook was the wicked wife of the forester, and the question and answer are differently given: for instance, ‘You should have gathered the rose and the bush would have followed you.”’ Like 'The Mastermaid', this tale is is Aarne–Thompson type 313A, 'the girl helps the hero flee' - which I reckon ought to be renamed 'the heroine rescues the boy'!

It’s a simple but satisfying tale: Lina, who has magical skills, is the boy’s foster sister and he her adopted brother. The pair are only children, but the tenderly repeated refrain, ‘Never leave me and I will never leave you’ suggests they may marry later on, as happens in another of the Grimms’ tales, ‘Sweetheart Roland’, to which it is related. This type of tale is very different from those darker stories in which sisters endure hardship and suffering for the sake of their brothers.

The extorted promise with which the wicked cook binds little Lina is a standard feature, as is the wickedness of the cook in the first place (fairy tales are built of standard features - we accept them as we accept the construction of a sonnet), but in this story the bond between the children proves stronger than the promise. (Since the usual fate of children who get boiled in cooking pots in fairy tales is to be served up to their fathers as stew, this may well have been the original intention of the wicked cook, or stepmother.)
There was once a forester who went into the forest to hunt, and as he entered it he heard a sound of screaming, as if a little child were there. He followed the sound and it led him to a high tree, and at the top of this tree a little child was sitting – for a bird of prey had seen it, flown down and snatched it away, and dropped it into the tree.

The forester climbed up and brought the child down. He thought, “I’ll take him home, and he shall grow up with our Lina.” So he took it home and the two children grew up together, and they named the boy who was found in the tree Fundevogel, since a bird had carried him away. And Fundevogel and Lina loved each other dearly. 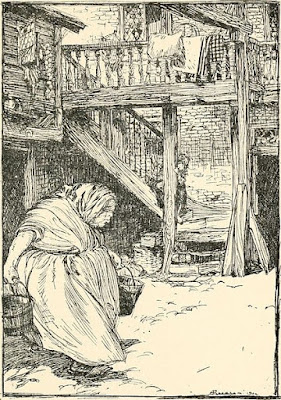 Now the forester employed an old woman to cook for him. One evening she took two pails and kept going back and forth to the brook, fetching more and more water. Lina saw this and asked, “Old Sanna, why are you fetching so much water?”

Early next morning the forester got up and went out hunting while the children were still in bed. Then Lina said to Fundevogel, “If you will never leave me, I will never leave you.” Fundevogel said, “Never will I leave you – not now, nor ever!” Then said Lina, “Then I will tell you. Last night old Sanna carried so many buckets of water into the house that I asked her why she was doing it, and she said that she would tell me, if I promised not to tell anyone, so I promised, and she said that early in the morning when father was out hunting, she would boil the water in the big kettle and throw you in. So let us get up quickly, dress, and go away together.”

So the children dressed themselves quickly and went away. When the water in the kettle was boiling, the cook went to the bedroom to find Fundevogel, but both the children were gone. The cook was now terribly alarmed. “What shall I say now when the forester comes back?” she said to herself. “The children must be caught and brought back home,” and she sent three servants running after them. 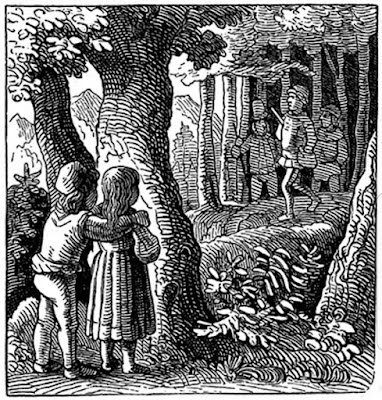 When the children looked back from the edge of the forest and saw the three servants running after them, Lina said to Fundevogel, “Never leave me and I will never leave you.” Fundevogel said, “Neither now, nor ever will I leave you.” Lina said, “Then you shall  become a rose tree and I the rose upon it.”

How the cook scolded! “You simpletons! You should have cut the rose bush in half and broken the rose off and brought it to me: go and do it at once!”

Off went the servants for a second time, but again the children saw them coming. Lina said, “Fundevogel, never leave me and I will never leave you.” “Neither now, nor ever,” said Fundevogel, and Lina said, “Now you shall become a church, and I’ll be the chandelier in it.”

So when the three servants came, nothing was to be seen but a church with a fine chandelier hanging inside it. “What can we do here?” they said to each other. “We will have to go home.” So they went home, and told the cook they had seen nothing but a church with a chandelier in it. “Fools!” scolded the cook. “You should have knocked the church to pieces and pulled down the chandelier and brought it back with you.” And now the old cook herself set off with the three servants in pursuit of the children.

When the children looked back this time and saw the old cook waddling after them, Lina said, “Fundevogel, never leave me and I will never leave you.” And Fundevogel said, “Neither now, nor ever!” Then said Lina, “You shall be a fishpond and I will be the duck on it.”

Well, the old cook caught up with them, and she saw the pond, and lay down beside it so that she could drink it all dry. But the duck swam smartly up to her. It seized her head in its beak and pulled her into the water, and there the old witch was drowned. Then the children were heartily delighted and went home together, and if they have not died they are living there still.

More on fairy tales and folklore in "Seven Miles of Steel Thistles" available at these links: here and here.

Fundevogel - the child in the tree - by Mercer Mayer
Fundevogel: The cook goes back and forth to the well: Arthur Rackham
Fundevogel -  The children see the three servants - Artist unknown