Arthur's Voyage to the Otherworld 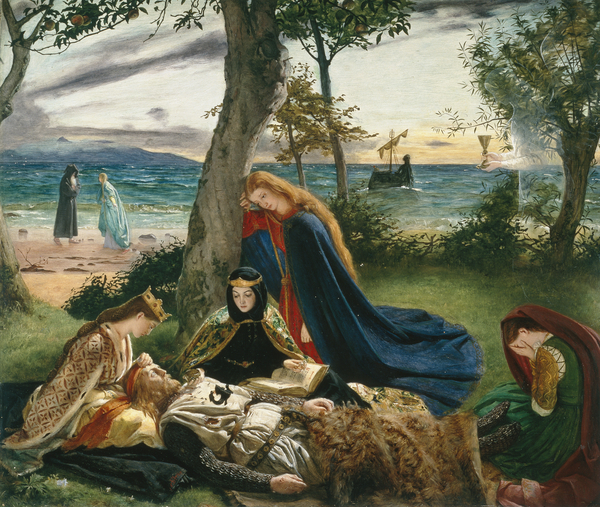 Perhaps you don't tend to think of Arthur as a voyager?  Bear with me, and I'll explain.

Some of the earliest mentions of Arthur come from ninth or tenth century Welsh literature – just glancing references, as if to someone already well-known. The earliest of all may be a couple of lines from the poem Y Gododdin, in which another warrior is compared with Arthur:

He fed black ravens on the ramparts of a fortress,
Though he was no Arthur.

This makes sense if the historical Arthur really was an early British war leader: his name perhaps a nickname or pseudonym: ‘the Bear’, suitable for a fighter who may have wished to maintain an air of terrifying mystery. Whoever the historical Arthur may have been (Andrew Breeze, a professor of philology at the University of Navarre, has put forward the interesting theory that he was a 6th century warlord from the Strathclyde area in Northern Britain, whose battles, like those of the Ulster cycle, were glorified cattle raids against other Britons rather than against the Anglo-Saxons), the name of Arthur became associated with legends connected with supernatural figures from Celtic mythology. And such stories continued to be told about him in all parts of Celtic – that is British – Britain: and also in Brittany, the region of France to which many British Celts migrated after the fall of Roman Britain.

Even in Sir Thomas Malory’s late 15th century ‘Le Morte D’Arthur’ with all its courtly French additions and sources, plenty of Welsh and Celtic personages and motifs remain: the most obvious is Merlin himself, and the Lady of the Lake who gives Arthur his sword Excalibur, and there is Arthur’s shadowy relationship with his half-sisters: Morgause the mother of their son Mordred, and Morgan le Fay, Morgan the enchantress – whose name chimes with that of the Morrigan (‘great queen’ or ‘phantom queen’), the Irish Celtic goddess of battle and fertility. At any rate, Morgan is one of the queens who carry the wounded king away to the Isle of Avalon after the battle of Camlann.

And when they were at the water side, even fast by the bank hoved a little barge with many fair ladies in it, and among them all was a queen, and all they had black hoods, and all they wept and shrieked when they saw King Arthur.

…‘Comfort thyself,’ said the king, ‘…for in me is no trust for to trust in, for I will into the vale of Avilion to heal me of my grievous wound, and if thou hear never more of me, pray for my soul.’

But ever the queen and ladies shrieked, that it was pity to hear. 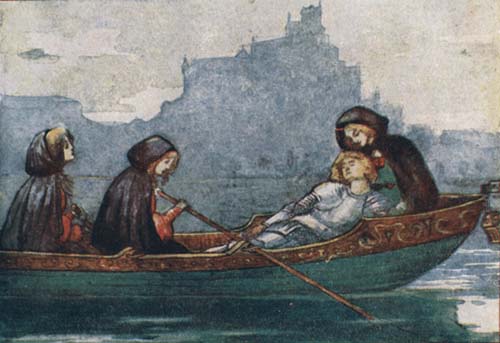 The shrieking and keening women, companions to a powerful sorceress, the ship that carries the hero away to the island of the dead, the island of apples...surely there are echoes here of the voyage of Jason to the Hesperides, home of the sorceress Medea, and of Odysseus to the island of Circe and the shores of Hades?

But  much closer to home is a highly cryptic account of a voyage by Arthur to the Underworld. It’s the marvellous Welsh poem Prieddeu Annwfn, preserved in the single 14th century manuscript of The Book of Taliesin, but dated (cautiously) by internal linguistic evidence to around 900 AD. Here’s a link to the poem, with notes. It's an account of a raid led by Arthur, in his ship Prydwen, on Annwn, the Welsh underworld. There's a gorgeously illustrated book of this adventure by John and Caitlin Matthews:- 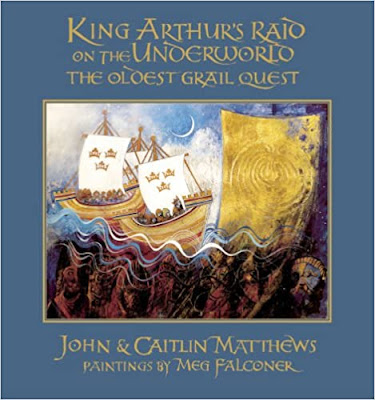 Annwn is described by a number of different epithets. Are these simply varying descriptions or manifestations of the same place, or are they intended as different locations which Arthur and his men encounter along their way, island-hopping as Jason and Ulysses do, gradually approaching their destination through a transformed and numinous sea-scape? The poem tells how Arthur and his men travel to Caer Sidi ‘The Mound Fortress’; Caer Pedryuan ‘the Four-Peaked Fortress’ – also described as Ynis Pybyrdor ‘isle of the strong door’. They travel to Caer Vedwit ‘the Fortress of Mead-Drunkenness’, Caer Rigor ‘Fortress of Hardness’, Caer Wydyr ‘Glass Fortress’, Caer Golud ‘Fortress in the Bowels [of the Earth?]’, Caer Vandwy ‘Fortress of God’s Peak’, and Caer Ochren ‘Enclosed Fortress’.  Alan Garner used some of these names in his book Elidor, which references the poem in other ways. 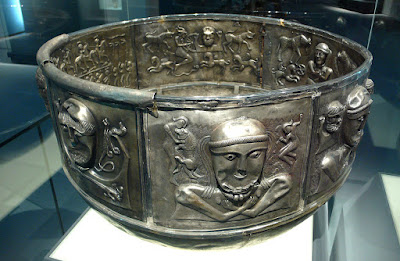 The aim of the expedition was to bring back a cauldron belonging the lord of Annwn. We're not thinking blackened kitchen pots here, but inspirational, magical, probably sacred objects like the 1st century BC Gundestrop cauldron, pictured above.  One of the many scenes on its sides depicts a pony-tailed warrior dipping a man into another such cauldron headfirst, probably to restore him to life: 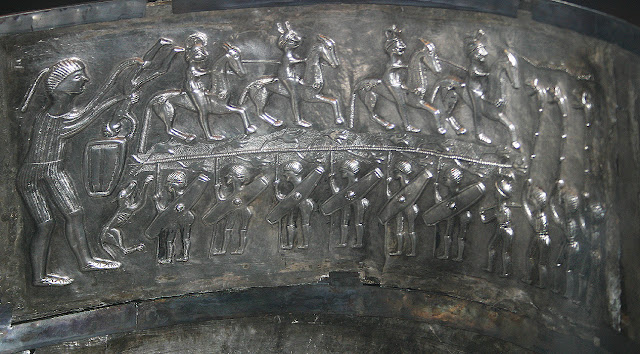 In 'Elidor', one of my favourites of Alan Garner’s books, the children bring four treasures out of the Mound of Vandwy, corresponding to the Four Treasures of the Tuatha de Danaan: a spear, a sword, a stone and a bowl: 'a cauldron, with pearls above the rim. And as she walked, light splashed and ran through her fingers like water'. Taken into the workaday world of 1960's Manchester, however, the objects change appearance, and Helen finds she is carrying only 'an old cracked cup, with a beaded pattern moulded on the rim.' Once these treasures have been buried in the garden for safekeeping, all kinds of strange disturbances begin to occur, culminating in the eruption of the unicorn Findhorn onto the city streets.

Here is the second stanza of the Prieddeu Annwfn:

I am honoured in praise. Song was heard
In the Four-Peaked Fortress, four times revolving.
My poetry, from the cauldron it was uttered.
By the breath of nine maidens it was kindled.
The cauldron of the chief of Annwfn: what its fashion?
A dark ridge around its border, and pearls.
It does not boil the food of a coward...

And before the door of hell lamps burned.
And when we went with Arthur in his splendid labour,
Except seven, none rose up from Caer Vedwit.

Most of the eight stanzas end with a variation on the recurrent line: ‘Except seven, none returned’: by ordinary standards the expedition appears to have been disastrous, but this is no ordinary poem. Fateful and gloomy, mysterious as Arthur himself, all we can gather from it is some sense of a venture, by ship, by sea, into the Otherworld, and - perhaps – a description of a mound or island where a youth, Gweir, is imprisoned, lapped with a heavy blue-grey chain. Of a four-peaked fortress with a strong door, guarding a cauldron full of the magical life-giving mead of poetry, warmed by the breath of ‘nine maidens’. And of a fortress of glass with six thousand men lining the walls (‘it was difficult to speak with their sentinel’).

In the medieval story of Culhwch and Olwen in the Mabinogion, Arthur sails to Ireland in his ship Prydwen to steal the cauldron of Diwwnach Wyddel: not just any old cauldron either, for it’s also listed in ‘The Thirteen Treasures of the Island of Britain’ as the cauldron of Dyrnwich the Giant, which will not boil the food of a coward. Clearly the same cauldron as that which Arthur went to find in Annwn, and doubtless the same also as the Irish Cauldron of the Dagda, from which 'no man ever went away unsatisfied'. How old is this legend of magical, life-giving cauldrons? As old as Medea's? Could the ancient British and Irish cauldrons be the ultimate origin of the witches' cauldron we find in 'Macbeth'? Who knows?  But the legends all say that Arthur did not die. He only sleeps. And is waiting in the Otherworld to return to us, in our hour of need. 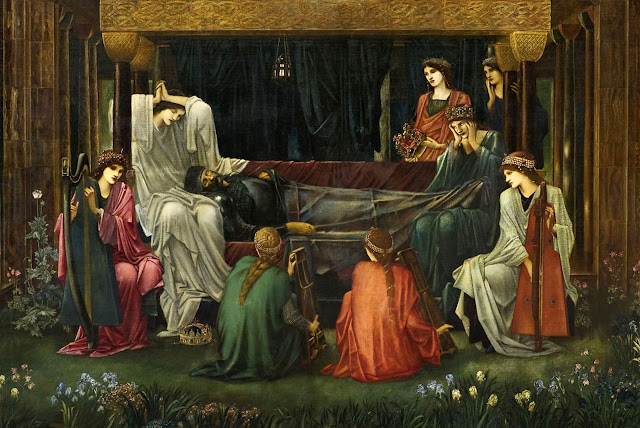 
Posted by Katherine Langrish at 05:21