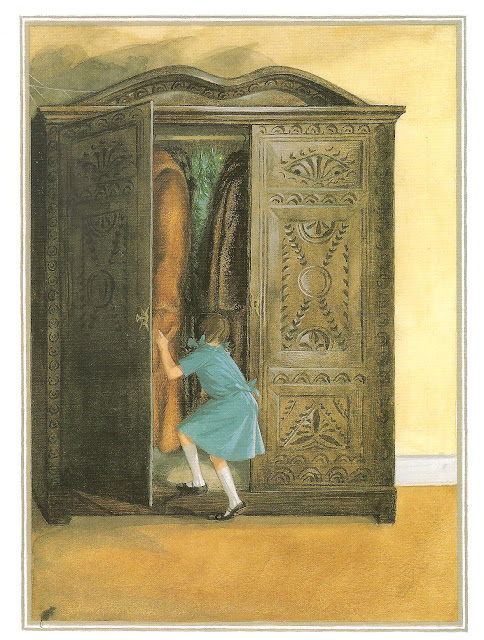 Aged nine and passionate about Narnia, I wrote a set of my own stories about that magical country, and that far-off labour of love resulted in the publication this year of my book 'Spare Oom'. (So great is the power of childhood reading to reverberate down the years!) Now my friend and fellow author Elizabeth Kay has sent me a poem she wrote about her own experience of reading the Chronicles of Narnia when she was a child of ten. It’s so lovely I’ve asked her to let me share it with you, so this is her introduction.

For me, aged ten, the Chronicles of Narnia produced one of those lightbulb moments. I can remember sitting up in bed and thinking, ‘hang on – died and came back to life three days later? Where have I heard that before?’ It was my discovery of subtext, and the moment I made the connection, decoding the rest of the books became an obsession.

Vera Rich, poetry translator extraordinaire who died ten years ago, knew all sorts of people and told me that Tolkien had tackled Lewis as to why everyone in Narnia spoke English. The Magician’s Nephew was written retrospectively to explain this, as well as being a convenient parallel for Genesis.

My French teacher at school, a Dr Moore, lived with her elderly father who had been an Oxford don and a friend of all the Inklings. How I wish I’d asked a few more questions! But those books left such a lasting impression that when I wrote my own fantasy, The Divide, I wanted to recapture some of that feeling of exploring anther world peopled with all the mythical beings of my childhood. It also led to my poem The Threshold, which was, incidentally, published by Vera Rich in her magazine Manifold.

I turned the key; there was a catch,

To cure that itch I couldn’t scratch.

I heard a paper lion roar;

I watched a magic molehill hatch -

I learnt about an ancient law,

And how the empress met her match;

I thought about it, and I saw

The worlds that I could now unlatch;

I put the book down on the floor

(I’d only read the briefest snatch)

When I was ten I found a door, 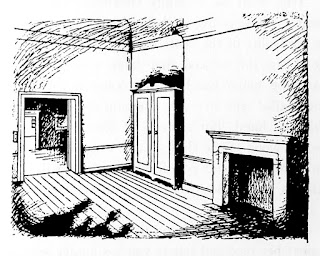 Lucy enters the wardrobe: Pauline Baynes illustration to the deluxe edition of The Lion, The Witch and the Wardrobe (HarperCollins 1998)

The wardrobe: Pauline Baynes illustration, The Lion, The Witch and the Wardrobe, Geoffrey Bles, 1950

Posted by Katherine Langrish at 04:25