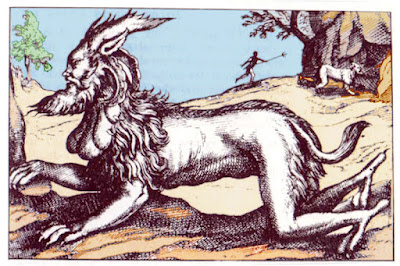 I'm reviving an occasional series I used to run a few years ago called 'Folklore Snippets' - quite simply little bits of folklore I've found which are fun to share. You can find any and all of the previous ones by putting 'Folklore Snippets' into the search box near the top of the right-hand column. This one is all about the Drac!

The Drac is a French river-spirit of great shape-shifting ability. Perhaps we first hear of him in Gervase of Tilbury’s 12th century book Otia Imperialia or 'Recreation for an Emperor' written for Henry II's grandson Otto of Brunswick. Gervase writes how the townsfolk of Arles, where he lived for a time, claimed:

The Dracs assume human form and come early into the public market-place…  They have their abode in the caverns of rivers, and occasionally, floating along the stream in the form of gold rings or cups, entice women or boys bathing on the banks of the river; for while they endeavour to grasp what they see, they are suddenly seized and dragged down to the bottom: and this, they say, happens to none more than to suckling women, who are taken by the Dracs to rear their unlucky offspring…

Sometimes the women are kept for seven years in large and splendid palaces beneath the river. Gervase remarks that he himself knew a woman who was taken while she was washing clothes on the banks of the Rhone.

A wooden bowl floated by, and in endeavouring to catch it, having got out into deep water, she was carried down by a Drac and made nurse to his son below the water. She returned uninjured, and was hardly recognised by her husband and friends after seven years absence. 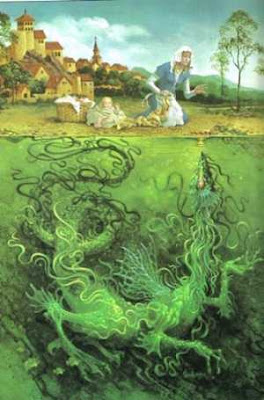 This strikes me as - possibly - a handy excuse for absences that might have had alternative explanations: as in other fairy- and folk-lore. (Many a changeling tale may have had its roots in the wish to repudiate an ailing or unwanted child.) Gervase adds to the story the well-known and widespread coda in which the woman, back on land, meets the Drac in the market-place, greets him, and is blinded in the eye with which she sees him. He concludes:

On the banks of the Rhone, under a guardhouse at the North-gate of the city of Arles, there is a great pool of the river… In these deep places that say that the Dracs are often seen of bright nights, in the shape of men. A few years ago for three successive nights, the following words were openly heard outside the city gate, while a figure like that of a man ran along the bank: ‘The hour is passed, but the man is not come.’ On the third day, about the ninth hour, while that figure of a man raised his voice higher than usual, a young man simply ran to the bank, plunged in and was swallowed up: and the voice was heard no more.

These passages are taken from the English translation in Thomas Keightley’s ‘Fairy Mythology’ of 1828, and Keightley speculates that the name ‘Drac’ may be derived not from ‘Draco’ or dragon, but from the Norse ‘Duerg’ or dwarf, since: ‘the Visigoths long inhabited Provence and Languedoc’. While it’s true that the shape-shifting, river-inhabiting Dracs do not very much resemble dragons, neither do they very much resemble dwarfs. But they do  remind me of the Romanian Zmeu (Zmei, plural): a shape-shifting dragon-man-creature that appears in many fairytales. It – or he – can take human or giant human form, but can also appear as a fire-breathing, flying dragon. He likes to steal fair maidens, and is usually foiled by the Romanian hero Fāt-frumos. Translaters have had difficulty conveying all that the word implies: in 19th French translations the Zmeu becomes a génie, while English translations tend to use ogre or giant. But the Zmeu does seem to share some similarities with the Drac, so I suspect the draco derivation is the correct one after all. (See the foot of this post for a link to a story involving Zmei.) 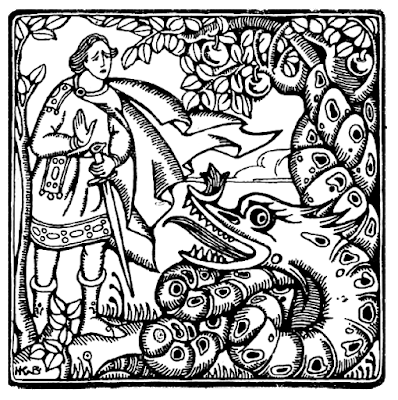 Here are some much later folk tales about the Drac which demonstrate the wide range of his magical ability to assume other forms!

Fantastic animals, alone or associated with supernatural beings, sometimes haunt the running waters. The people of Boqueho (Côtes-du-Nord) assure us that, when it is moonlight, we hear the sound of mysterious horses drinking from the stream that flows below the menhir of Kergofï.

In the Auvergne, the Drac appears as a beautiful white horse, which can be easily ridden, and its back stretches out slyly and demurely. One day, when several children were riding one of these horses, it was heard to say: ‘I'm going to drown you all!’ and it took off towards the Allagnon. Fortunately an old woman who had recognised him shouted to the children to cross themselves. When they had done so, they found themselves on their feet a league away from the place from which they had set off.

In the Aude, a Drac had taken the form of a black donkey to cross a bridge; some children having seen him mounted on his back, which grew longer as each rider climbed on it. He went towards the river, but when he reached the middle of the river, he shook himself off and made the children take a forced bath.

When the girls of Marlenheim (Upper Alsace) come out of the spinning workroom at night, they often see white sheep walking in front of them. Whoever of them follows the animal, which keeps bleating, is lured to the stream and dragged into the water.

Finally, these accounts of river serpents may be related to stories of Dracs, although they neither shape-shift, nor kidnap or drown people:

The legend of the snake which deposits its diamond on the grass before going to drink, is especially widespread in the East and North of France…

In Walloon Belgium, a story is told of a huge snake that used to strangle in its coils all creatures that passed through Morimont. He always wore a large diamond on his forehead, and only left it to bathe, when he would place it on a flat stone. At first he never let it out of his sight, but once his rampages had spread terror through the countryside, he became over-confident and would frolic in the sun for half an hour without paying any attention to the jewel. A charcoal burner working in the neighbourhood decided to try and get hold of the famous diamond. He began building a large kiln, and every day at the stroke of noon he would break off this long work and climb a large birch tree to watch the monster’s movements, and find out exactly where he placed his stone before entering the water. As soon as the charcoal burner was completely familiar with his habits, he sneaked up, and at the precise moment when the snake was happily bathing and the crackling of burning logs in the kiln prevented the beast from hearing, he seized the diamond and bounded away.

When he came out of the water, the snake flew into a terrible rage when he found that his jewel was missing. Hissing furiously he beat the bushes, twisting and breaking the branches and young trees in his anger. His search revealing nothing, he suspected where the thief had come from and headed for the charcoal burners' huts, but the frightened men had barricaded themselves in and blocked up the chimney-holes. After hours of fruitless effort, the monster realised he could not break in. Then, his passion rising to its height, he struck the earth with such violence that he crushed his own head – that very head in which he had worn the jewel.

Near the stream of Mossig, in the valley of Kronthal (Lower Alsace), one can often hear, in the quiet nights, a soft and melodious song; it comes from beautiful snakes which live on its banks, and whose golden crowns can be seen shining amongst the grass.

You can find a fairy tale involving more than one Zmeu here: Iliane of the Golden Tresses is a Romanian tale; I translated it from a French version, and stuck with the French translation 'genie', since these particular Zmei do nothing very dragonish.

The washerwoman and the drac: image from Légendes de France and https://www.dol-celeb.com/creatures/drac/

Posted by Katherine Langrish at 02:27