Folklore Snippets: The Ship Beneath the Waves 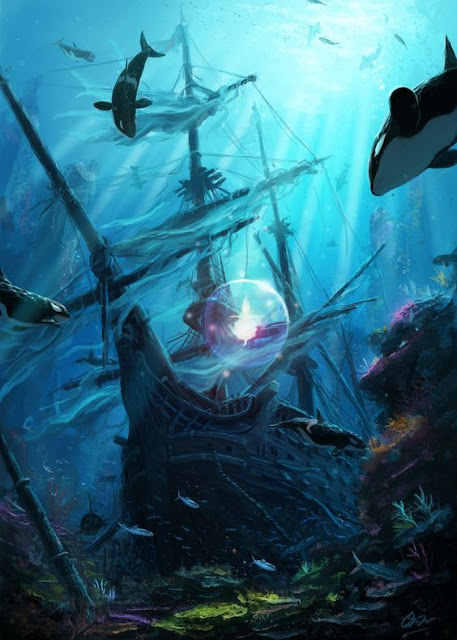 From Le Folk-Lore de France, Paul Sebillot (1904), this tale is an odd twist on 'The Sleeping Beauty'.

"Sailors seldom talk about ships or objects held by supernatural powers at the bottom of the sea. However, in the vicinity of Cap Fréhel (Côtes-du-Nord), it's said that an enchanted vessel lies intact under the waters of the Bay of La Fresnaye [in Brittany] and a number of accounts tell how it came to be down there.

A captain had kidnapped a young English girl and hidden her in his boat. Her fairy godmother tried to rescue her but was unable, for the captain was protected by the devil - and the devil is more powerful than the fairies. When she found that all her efforts were in vain, the fairy transformed the girl’s kidnapper into a dog, and attached him to the bottom of the ship with a huge chain. Then she put her goddaughter to sleep, dressed in beautiful clothes and precious jewels, and lowered the ship to the bottom of the sea. The devil, who witnessed all this and could not prevent it, promised the captain immortal life and swore that the girl would never belong to another. People say that if a priest would come down to the shore on a high tide, carrying the host, he could deliver the girl. Glimpses of the ship can be seen from time to time when the tide is very low; but the howling of the dog is often heard. It rages whenever a fishing boat strays over the vessel where it is chained; it believes the girl it guards is going to be taken from it, and it is ready to devour the unwary."

Posted by Katherine Langrish at 05:39