Folklore Snippets: Thorsten and the Dwarf 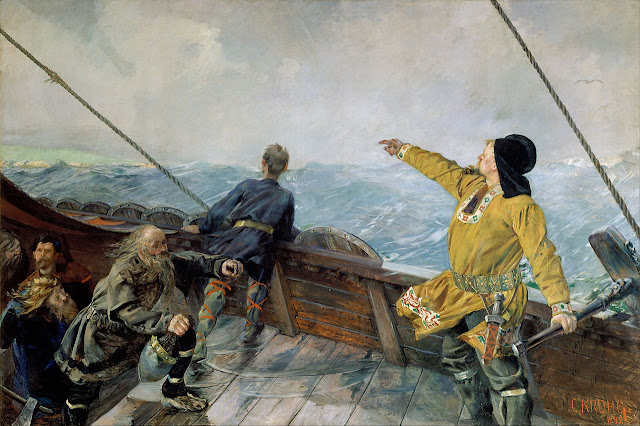 Perhaps this is more of a fairytale snippet than a folklore snippet. The picture, which I rather like, is an imaginary reconstruction of Leif Eriksson's first glimpse of 'Vinland' painted by Christian Krohg (1893). The story hasn't anything to do with that, except that it's set in Vinland. It's a very tall tale of dwarfs and dragons, which I found in Thomas Keighley’s ‘Fairy Mythology’ (1828). Keightley claims it was taken from ‘Thorston’s Saga’ [sic]; I assume by this he means 'The Saga of Thorstein Vikingsson' which is similar in style - non-historical and full of adventures, sorcery and entertaining magical occurances - but I haven’t in fact been able to locate it there. If anyone knows, please enlighten me! Whatever its source, I love the laconic closing line.

[Edited to add: the knowledgeable Simon Roy Hughes of the blog Norwegian Folk Tales has come to my aid to say, 'There are a few Thorsteins in the sagas. You’re looking for the third chapter of “The Tale of Thorstein Bæjamagn” (Þorsteins Þáttr Bæjarmagns) in the Heimskringla'. Interestingly, the dragon seems to be a 19th century mistranslation of Ørn (eagle) for 'Orm' (worm, dragon); unless perhaps the manuscript is unclear.]

When spring came, Thorsten made ready his ship and put twenty-four men on board of her. When they came to Vinland, they ran her into a harbour, and every day he went on shore to amuse himself.

He came one day to an open part of the wood, where he saw a great rock, and a little way out from it a Dwarf, who was horridly ugly and was looking up over his head with his mouth wide open; and it appeared to Thorsten that it ran from ear to ear, and that the lower jaw came down to his knees. Thorsten asked him why he was acting so foolishly.

‘Do not be surprised, my good lad,’ replied the Dwarf; ‘do you not see that great dragon that is flying up there? He has taken off my son, and I believe that it is Odin himself that has sent the monster to do it. But oh, I shall burst and die if I lose my son.’

Then Thorsten shot at the dragon and hit him under one of the wings, so that he fell dead to the earth; but Thorsten caught the Dwarf’s child in the air, and brought him to his father.

The Dwarf was exceedingly glad, and rejoiced more than anyone could tell, and he said, ‘A great benefit have I to reward you for, who are the deliverer of my son; and now choose your recompense in gold and silver.’

‘Cure your son,’ said Thorsten, ‘but I am not used to take rewards for my services.’

‘It would not be right,’ said the Dwarf, ‘if I did not reward you; and do not think my shirt of sheeps’ wool, which I will give you, a contemptible gift, for you will never be tired when swimming, or ever get a wound, if you wear it next to your skin.’

Thorsten took the shirt and put it on, and it fitted him well, though it had appeared too short for the Dwarf. The Dwarf now took a gold ring out of his purse and gave it to Thorsten, telling him that he should never want for money while he kept that ring. He next took a black stone and gave it to Thorsten and said, ‘If you hide this stone in the palm of your hand, no one will see you. And now I have few more things to offer that would be of value to you, but I will give you this fire-stone for your amusement.’

He took the stone out of his purse, and with it a steel point. The stone was triangular, white on one side and red on the other, and a yellow border ran around it. The Dwarf said, ‘If you prick the white side of the stone with the point, there will come on such a hailstorm that no one will able to see through it; but if you want to stop this shower, you have only to prick the yellow part, and there will come so much sunshine that the hail will melt away. But if you should prick the red side, out of it will come such fire, sparking and crackling, that no one will be able to look at it. You can get whatever you want from this point and stone: and they will come back to you by themselves when you call them.

‘I can now give you no more such gifts.’

Thorsten thanked the Dwarf for his presents and returned to his men, and it was better for him to have made this voyage than to have stayed at home.

Posted by Katherine Langrish at 03:19