In his book of travels, ‘In The South Seas’ – subtitled ‘an account of experiences and observations in the Marquesas, Paumotus and Gilbert Islands in the course of two cruises on the yacht Casco (1888) and the schooner Equator (1889)’ – Robert Louis Stevenson relates a number of supernatural stories told to him by the islanders, according to whom the forest-clad slopes were full of  ‘souls of the unburied dead, haunting where they fell, and wearing woodland shapes of pig, or bird, or insect; the bush is full of them; they seem to eat nothing; slay solitary wanderers apparently in spite; go down to villages and consort with the inhabitants undetected...’

So much I learned ... walking in the bush with a very intelligent youth, a native. It was a little before noon; a grey day and squally; and perhaps I had spoken lightly. A dark squall burst on the side of the mountain; the woods shook and cried; the dead leaves rose from the ground in clouds, like butterflies; and my companion came suddenly to a full stop. He was afraid, he said, of trees falling; but as soon as I had changed the subject of our talk he proceeded with alacrity.

We’re not told what Stevenson said, that disturbed his companion just before the sudden alarming squall, but I like the fact that he mentions it – and leaves the question of cause and effect open. This is merely the beginning though, as Stevenson goes on to relate more instances in which the sound of falling trees was attributed to some supernatural cause.

Take ... the experience of Rua-a-mariterangi on the isle of Katui. He had a need for some pandanus, and crossed the isle to the sea-beach, where it chiefly flourishes. The day was still, and Rua was surprised to hear a crashing sound among the thickets, and then the fall of a considerable tree. Here must be someone building a canoe; and he entered the margin of the wood to find and pass the time of day with this chance neighbour. The crashing sounded more at hand; and then he was aware of something drawing swiftly near among the tree-tops. It swung by its heels downward, like an ape, so that its hands were free for murder; the speed of its coming was incredible; and soon Rua recognised it for a corpse, horrible with age, its bowels hanging as it came. Prayer was the weapon of Christian in the Valley of the Shadow, and it is to prayer that Rua-a-mariterangi attributes his escape. No merely human expedition [expedient] had sufficed.

When I read this for the first time I was about thirteen; my family and I were then living in a lovely but lonely cottage on a Herefordshire hillside. The nearest village was a mile away down a rough track, the countryside was beautiful, the nights pitch-dark. At the bottom of the field, the track wound between two immensely tall elm trees, through which the wind made a mighty rushing. This story would return to me whenever I had to walk under them alone at night, and shiveringly I would imagine the upside-down corpse swinging towards me out of the branches... but I should have paid more attention. As Stevenson points out, the apparition was a daytime one.

This demon was plainly from the grave; yet you will observe he was abroad by day. And [...] it is no singular exception. I could never find a case of another who had seen this ghost, diurnal and arboreal in its habits; but others have heard the fall of the tree, which seems to be the signal of its coming. Mr Donat was once pearling on the uninhabited isle of Haraiki. It was a day without a breath of wind, such as alternate in the archipelago with days of contumelious breezes. The divers were in the midst of the lagoon upon their employment; the cook, a boy of ten, was over his pots in the camp. Thus were all souls accounted for except a single native who accompanied Donat into the wood in quest of sea-fowls’ eggs. In a moment, out of the stillness came the sound of the fall of a great tree. Donat would have passed on to find the cause. ‘No,’ cried his companion, ‘that was no tree. It was something not right. Let us go back to camp.’ Next Sunday [...] all that part of the island was thoroughly examined, and sure enough, no tree had fallen. A little later Mr Donat saw one of his divers flee from a similar sound, in similar unaffected panic, on the same isle. But neither would explain, and it was not till afterwards, when he met with Rua, that he learned the occasion of their terrors.

In the South Seas: Ch V1 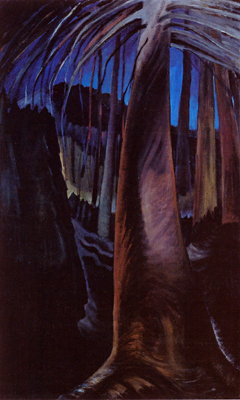 Now of course trees fall in old forests for other reasons than woodcutters or strong winds. They may be rotten; insects may burrow into them and weaken them, but the sound, on a still night or day, must always be impressive. This common experience may explain why a similar folklore of falling trees is found in other wooded parts of the world.

When I was writing ‘Troll Blood’, the third book in my ‘Troll’ trilogy, I spent some time researching the folklore of the First Nations peoples who inhabit the still-extensive North-East Woods of North America. Elizabeth Frame, in ‘A List of Micmac Names’ (1892) name-checks an unseen – yet heard – woodsman known to the Mi’kmaq of Nova Scotia and New Brunswick:

Ke’askunoo’gwejit: A mighty chopper, a fabulous being who cuts down trees; you hear the chopping, the workman is invisible, but the tree falls.

‘A fabulous being’ Frame calls it, and possibly she is trying to convey that this entity would not have been thought of as a spirit: the European soul/body dichotomy was literally foreign to the Mi’kmaq and their neighbours, as was our European sense of being somehow separate from, or above, nature. For the Mi’kmaq, humans, animals, stars, even trees and some rocks were – and I daresay still are – ‘people’ or ‘persons’. 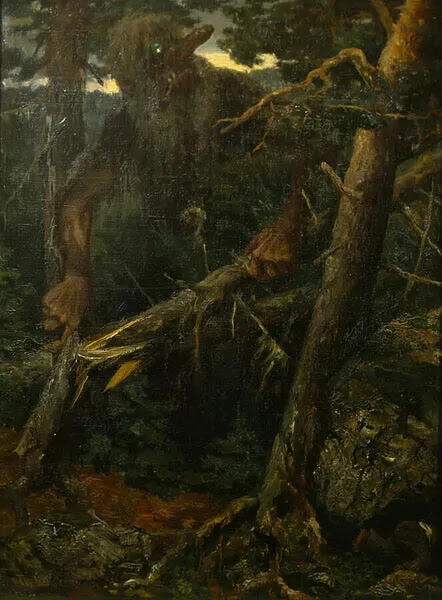 Baptist missionary, ethnologist and linguist Silas Rand (1810-1889) spent 40 years as a pastor with the Mi’kmaq. He spoke Mi’kmaq, Mohawk and Maliseet, along with a shedload of modern and ancient European languages; he compiled a Mi’kmaq/English dictionary, and on his death left over 900 pages of personally recorded tales to be posthumously published as ‘Legends of the Micmac’ (Longmans, Green, 1894). He gives ‘We’gooaskunoogwejit’ as a variant of the woodcutter’s name (the words were all written down long before any standardised spelling of the Mi’kmaq language), and describes him as:

An imaginary being who was supposed to cut down trees with one or two blows. The Indians say they sometimes hear in the woods, as it were, the sound of an axe upon a tree, and then see the tree fall, even on a calm day, though no one is visible. 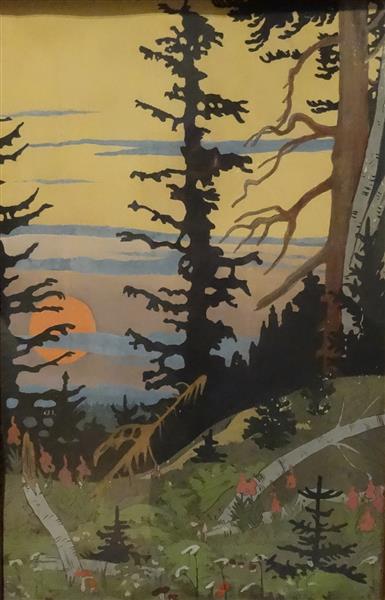 ‘An imaginary being’: his description echoes Frame’s construction and may predate it. Both Europeans carefully emphasise their personal disbelief in the phenomenon. But for whatever reason, both take equal care not to call it a spirit.

A third account occurs in ‘In Indian Tents: Stories told by Penobscot, Passamaquoddy and Micmac Indians’ (Roberts Brothers, Boston 1897) compiled by Abby Langdon Alger (1850-1915), a Canadian ethnologist and translator. She collected the tales personally, but unfortunately was not very good at naming the storytellers or specifying the group to which they belonged. This account could be either Penobscot or Passamaquoddy:

Seeing a smoke come from the top of a mountain, the children asked the elders what it was, or who could live there, and the fathers told them, ‘That is Al-wus-ki-ni-gess, a tree-cutter, whose hatchet is made of stone. He throws it from him; it cuts the tree and returns to its master’s hand at each blow. One stroke of his hatchet will fell the largest tree. No one ever saw him save Glūs-kabé*, who often goes to the cave to visit him.

Unlike the corpse-like spirits of the Paumotu Islands whose arrival is heralded by the sound of a tree falling (but who don’t seem involved in chopping them), none of these three brief North-East Woods stories suggest that the invisible treecutter is dangerous or even frightening – but a feeling of awe, mystery and power is attached to the phenomenon.

Japan is the home of my third example. According to ‘The Book of Yokai’ by Michael Dylan Foster (University of California Press, 2015), the sound of a tree crashing down in a forest may be attributed to a tengu-daoshi. A tengu (which literally means ‘celestial dog’ or ‘heavenly dog’) is, he says, one of the best known of all yōkai (a ‘weird or mysterious creature, a monster or fantastic being, spirit or sprite’) and is thought of as a kind of ‘mountain goblin’ which has morphed over the centuries from an invisible, malevolent spirit, to a winged human/bird-like creature, to a winged monk with a long red nose. Tengu range in their habits from helpful to mischievous to harmful. During the Edo period (c. 1600-1868):

... tengu became increasingly associated with mountain worship and deeply embedded in all manner of local folk belief. They were often invoked as an explanation for mysterious happenings. The sound of a tree falling in the forest, for example, might be attributed to the machinations of a tengu and called tengu-daoshi (tengu knocking-down). A loud guffaw echoing through the forest was called tengu-warai (tengu laugh). 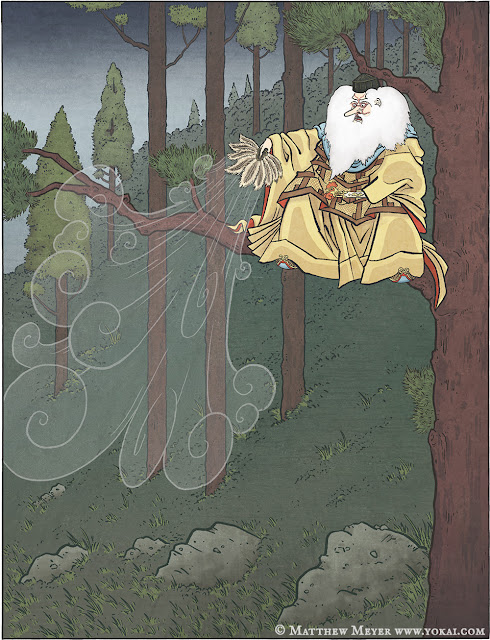 This illustration of a rather kindly, Gandalf-ish tengu is by writer and artist Matthew Meyer – who blogs about all kinds of yōkai at https://yokai.com. (Well worth a visit.) He provides a more detailed description of the tengu-daoshi, characterising it as ‘an audio phenomenon which occurs deep in the woods [...] the sound of a large tree falling down and the crashing vibrations of it hitting the forest floor. Often it is accompanied by a powerful gust of wind.’ This chimes with Stevenson’s account in which ‘a dark squall burst on the side of the mountain; the woods shook and cried; the dead leaves rose from the ground in clouds, like butterflies’, and his companion declared a sudden fear of ‘falling trees’. Meyer goes on to explain that tengu-daoshi, the phenomenon of trees knocked down by tengu –

is usually encountered only by people who spend much of their time in the mountains, such as woodcutters ... The sound of trees being chopped and crashing to the ground late at night comes from deep within the mountains. It can continue for some time. Occasionally voices can even be heard shouting, ‘Izuko!’ (the equivalent of shouting ‘Timber!’ as the tree falls). Woodcutters sometimes feel creatures shaking their sleeping huts during the night. However in the morning, there is no sign of fallen trees or any evidence whatsoever of what could have made the noise.

This absence of evidence echoes the Paumotu experience of ‘Mr Donat’ and the pearl-divers, when they searched the atoll without success for signs of the tree they had heard fall.

Such striking similarities in narratives so distant from one another – from the north-eastern woods of North America to the Paumotu Islands (known as the Tuamoto today) in the South Pacific – to Japan – begs the question, ‘Can there have been any continuity of tradition, or is this a case of convergence, in which the same conditions produce similar explanations?’ Myself, though without any real evidence – I lean to the first. But who knows? If anyone reading this knows any similar tales of supernatural foresters, I’d love to hear them. 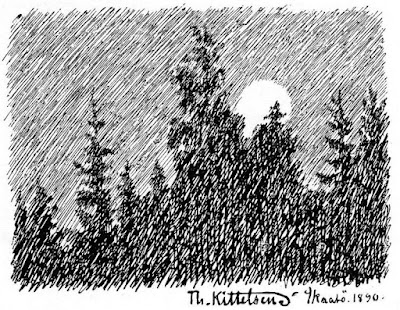 Posted by Katherine Langrish at 02:39