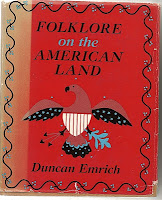 olklore, like democracy, is of the people, by the people, for the people.  It may get written up, annotated, shut into books and become the subject of scholarly papers, but it doesn’t stay there, it flows out round the edges – like the Swedish story of the troll who sealed up a whole lake in an envelope and sent it by a travelling tinker to be delivered to a town he wanted to drown.  On the way, the tinker felt his pocket getting damp, investigated, and found the envelope leaking water.  He opened it, and out rushed the entire lake…
Here’s a book with a whole lakeful of folklore shut up inside it.  I was in my local Oxfam shop a couple of days ago and fell for this very big, very thick secondhand  book called ‘Folklore on the American Land’, by Duncan Emrich, published by Little, Brown & Co, 1972. It's not, as I initially thought it might be, a book of Native American tales, it's a book about folklore collected from the American people during - roughly - the first half of the 20th century.
Emrich was born in 1911, became an English Professor at , served in Military Intelligence during the war, became chief of the Archives of American Folk Song section of the Library of Congress, and ended his days as Professor of American Folklore at .  He died in 1977.  So, a scholarly man.  And the book looks intimidating: emblazoned with the eagle and weighing heavy.  Yet it turns out to be one of those books, that as soon as you open it, the stuff inside just flies out and demands to be shared – and that’s quite simply what I’m going to do. 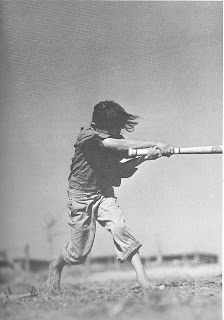 It’s full of wonderful photographs, for a start - like this one, from  Robstown, Texas, 1942, Saturday morning baseball. (Photo by Arthur Rothstein).
And this one from Delacroix Island, St Bernard Parish, Louisiana 1941: Spanish Muskrat trappers playing 'cache'.
(Photo by Marion Post Wolcott.) 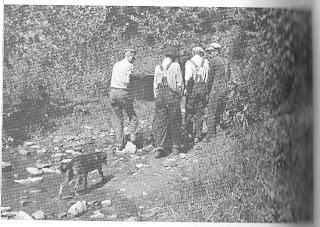 And this very moving one from somewhere near Jackson, Kentucky, 1940: a country funeral: Mountain people carrying a homemade coffin up a creek bed to the family plot on the hillside. (Photo by Marion Post Wolcott)
The book has sections about the etymology of place names, such as an explanation of the name of a river in :

“When Spanish explorers moved north out of into our Southwest, a small band reached the southern edges of what is now .  They were slain by Indians on the bank of a river and their bodies were left to become bones under the relentless sun.


"Later, a following group of Spaniards came upon the river at the same point and found the skeleton bodies.  They named the river with a great and sonorous Spanish name: El Rio de las Animas Perdidas en Purgatorio...  The River of the Souls Lost in Purgatory.


"In time, French trappers moved across the land.  They heard the Spanish name, but… shortened it to a reasonable , and that is the way the name rides on maps today: the . But Kentuckians and men from , knowing no French, heard the name within the limits of their own vocabulary and understanding as Picketwire.  So to them, and to generations of Coloradoans after them, the river became the Picketwire.  I have heard old-timers name it so.”
What hasn’t this book got in it?  There are the names of mining camps, racehorses and hound dogs.  There are lists of nicknames: Three-Fingered Smith, who chopped off two fingers bitten by a rattlesnake, Peg-Leg Annie whose feet were frozen in a snowstorm on Bald Mountain, Crooked-Nose Pete, and Christmas-Tree Murphy who ‘killed a man with a Christmas tree’, and names of ladies of easy virtue such as Cattle Kate, Ragged Ass Annie, Silver Heels, Prairie Rose, Few Clothes Mollie and Frisco Sal.    There’s stuff about children’s games, the varieties of cattle brands, tall tales, urban legends, historical songs, riddles, and folk medicine.  There are street cries (here are two from ):
Hot tamales, floatin’ in gravy
Suit ya taste and don’t mean maybe!
And:
Ice cold lemonade!
Freeze your teeth, curl your hair,
Make you feel like a millionaire!
Emrich delighted in the anonymous expressions and turns of phrase collected from his countrymen.
As hot as a June bride in a featherbed.  ()
Pity is a poor plaster ()
You’d think he could put out hell with one bucket of water (the Ozarks)
Cute as a speckled pup under a red wagon ()
And – here’s a lovely one – “He lives so far back in the hills, they have to wipe the owl-shit off the clock to see what time it is.”
I’ll be coming back to this book again, for sure.  In the meantime, though, from the chapter on folk language and grammar, here’s a paragraph about a lawyer in southwest who needed the exact date of a woman’s death to enter in some legal papers:
‘When the lawyer queried surviving relatives, he was told, “Aunt Suly died just past the peak of water-melon time.”  Another said, she had passed away “at the start of kitchen-settin’ weather”, the first chilly period of early fall, when people sit around the wood range in the kitchen.  The dead woman’s most intimate friend said. “She took sick when we was just about knee-deep in August.”’
And that's what I mean about folklore: the wonderful do-it-yourself idioms, stories and customs of the people. Authors?  Who needs 'em?  Don’t you just wish you could have thought of that yourself?
Posted by Katherine Langrish at 08:32