A few years ago I used to do a lot of oral storytelling. You can’t tell a story well unless you love it, and one of my absolute favourites is ‘Mr Fox’, the English version of ‘Bluebeard’. It’s far superior to Bluebeard, in my opinion, and its heroine, Lady Mary, is feisty and clever. But of course, one of the high points of the story is when she opens the little door decorated with the legend: Be bold, be bold, but not too bold/Lest that thy heart’s blood should run cold - and discovers the place where Mr Fox hangs up his victims: the well known Bloody Chamber.

Bruno Bettelheim, in 'The Uses of Enchantment', discusses the secret or forbidden rooms in fairytales very much in Freudian terms: “‘Bluebeard’ is a story about the dangerous propensities of sex, about its strange secrets and close connection with violent and destructive emotions.” The blood upon the key, which betrays to Bluebeard that his wife has entered the forbidden chamber, leaves little doubt that Bettelheim is right in this instance – though that motif is missing from Mr Fox, which is a story about a clever girl coming close to extreme danger but turning the tables on the one who threatens her.

Other rooms in traditional fairytales, such as the Sleeping Beauty’s chamber, or Rapunzel’s tower, can also be seen in Freudian terms as symbolizing unawakened virginity. (Although I’m uncomfortable with the extreme passivity of the image: and I do think it is dangerous to take a Freudian interpretation as an explanation. An individual fairy tale is much more than any particular common denominator. )

I was corresponding with the Australian fantasy YA author Kate Forsyth recently (look out for a review and interview with her on this blog later in the month) and the subject came up of magical rooms in children’s and YA fiction. And I started to think about how very different they often are from the Bloody Chamber or the Ivory Tower. The room, in children’s fiction, is a place of magical refuge, yet full of possibility.

A room of one’s own. Many children do not have one. They share with brothers or sisters. They lead lives ruled by adults. A room of one’s own, for a child, is a place where it can be in control. It’s also a place to start out from: the firm base of safety from which a child can explore the world. Rooms in children’s or young adult fiction, therefore, often reflect the desirable qualities of a perfect personal space.

Elizabeth Goudge was good at this. Maria, heroine of ‘The Little White Horse’, coming to the magic and mystery of Moonacre Manor, is provided with a bedroom in a tower with a door too small for an adult to get through. The room has three windows, one with a window seat, a ‘silvery oak floor’, and a four-poster bed ‘hung with pale blue silk curtains embroidered with silver stars’. And ‘the fireplace was the tiniest she had ever seen,’ but big enough for ‘the fire of pine cones and applewood that burned in it… It was the room Maria would have designed for herself if she had had the knowledge and the skill.’ From such a base Maria can with confidence launch her campaign against the men of the sinister Black Castle in the pine wood.

In ‘Linnets and Valerians’, perhaps Goudge’s masterpiece, the quieter heroine Nan is given a parlour of her own by her austere Uncle Ambrose. It opens off a dark passage, but then: ‘The room inside was a small panelled parlour. There was a bright wood fire burning in the basket grate, and on the mantelpiece above were a china shepherd and shepherdess and two china sheep. Over the mantelpiece was a round mirror in a gilt frame… Nan sat down in the little armchair and folded her hands in her lap… It was quiet in here, the noises of the house shut away, the sound of the wind and rain seeming only to intensify the indoor silence. The light of the flames was reflected in the panelling, and the burning logs smelt sweet.’ And yet, in the heart of this paradise a snake lurks: the discovery, in a cupboard, of an old notebook written by the witch Emma Cobley. ‘Nan sat down in the armchair with shaking knees, but nevertheless she opened the book and began to read.’

In each case, the rooms – though so utterly desirable – contain clues and hints of the past, of the passage of other people’s lives, and of mysteries which must be investigated.

In a similar way when Garth Nix’s Sabriel comes for the first time to the house of the Abhorsen, escaping terrifiying dangers, it is a place of refuge: ‘The gate swung open, pitching her on to a paved courtyard, the bricks ancient, their redness the colour of dusty apples. The path wound up to…a cheerful sky-blue door, bright against whitewashed stone.’ And she wakes later, ‘to soft candlelight, the warmth of a feather bed…A fire burned briskly in a red-brick fireplace, and wood-panelled walls gleamed with the dark mystery of well-polished mahogany. A blue-papered ceiling with silver stars dusted across it, faced her newly opened eyes.’ This is a place in which Sabriel cannot stay, but which belongs to her: it will strengthen her even though she must leave it. It’s also a place in which she will learn more about her family, her past.

It’s not a fantasy, but Betsy Byars’ ‘The Cartoonist’ is also about the necessity for a child to have some personal space and the strength that be derived from it. The only place in Alfie’s crowded house where he can be himself is in his attic, where he expresses himself by drawing the cartoons that are his life-blood. So long as he has his attic, he can cope with the demands of his noisy, feckless family: ‘The only thing Alfie liked about the house was the attic. That was his. He had put an old chair and a card-table up there, and he had a lamp with an extension cord that went down into the living room. Nobody ever went up there but Alfie. Once his sister, Alma, had started up the ladder, but he had said, “No, I don’t want anybody up there…I want it to be mine.”’ When the family decide over his head that his older brother can have the attic, Alfie’s entire personal existence feels threatened. He barricades himself in. 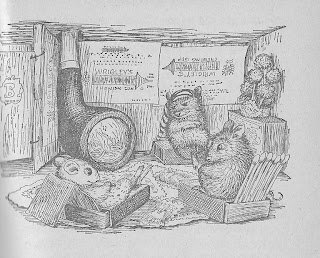 Magical rooms, magical personal spaces, abound in children’s fiction. In Margery Sharp’s ‘The Rescuers’, I was charmed as a child by the cosy home the mice build in the heart of The Black Castle whilst evading the dreadful cat Mameluke and trying to rescue the imprisoned Poet. The hole becomes: ‘a commodious apartment… Gay chewing gum wrappers papered the walls, while upon the floor used postage stamps, nibbled off envelopes in the Head Jailer’s wastebasket, formed a homely but not unsuitable patchwork carpet. Miss Bianca with her own hands fashioned several flower-pieces – so essential to gracious living – dyed pink or blue with red or blue-black ink’. And there’s the necessary fire, of course – ‘a fire of cedarwood’ made from cigar boxes.

I remember wishing I, like Heidi, could have a bedroom up a ladder in a hay-loft, where Heidi sleeps ‘as soundly and well as if she had been in the loveliest bed of some royal princess’. And to this bedroom she returns later in the book with her rich, lame friend Klara: ‘They all stood round Heidi’s beautifully made hay bed…drawing deep breaths of the spicy fragrance of the new hay. Klara was perfectly charmed with Heidi’s sleeping place. “Oh Heidi! From your bed you can look straight out into the sky, and you can hear the fir trees roar outside. Oh I have never seen such a jolly, pleasant sleeping room before.”’ Of course, this mountain home will give strength to Klara and heal her.

And isn’t part of the charm in Frances Hodgson Burnett’s ‘A Little Princess’ the way in which Sara’s attic room is transformed, first by the power of her imagination and then by a reality which she calls ‘the magic’, from a cold, inimical space into a place which comforts and sustains both body and soul? ‘“Supposing there was a bright fire in the grate, with lots of little dancing flames,’ she murmured. ‘Suppose there was a comfortable chair before it – and suppose there was a small table nearby with a little hot – hot supper on it. And suppose”- as she drew the thin coverings over her – “suppose this was a beautiful soft bed, with fleecy blankets and large downy pillows. Suppose – suppose –’ And her very weariness was good to her, for her eyes closed and she fell fast asleep.” Of course she awakes and finds it’s come true…

Rooms in children’s fiction are not Freudian symbols of sexual awakening, nor are they cold ivory towers from which it is necessary to be rescued. Children’s rooms are magical personal spaces in which the child is protected and nourished, in which she can learn to be herself and from which she – or he – can explore the world.


Illustration by Garth Williams, from Margery Sharp's 'The Rescuers'
Posted by Katherine Langrish at 04:29