Polly the puppy is currently ruling my life during every waking minute of hers. Things will change week by week, but at the moment she sleeps all night (what a good dog!) and wakes, whining, just before 7am. This is my cue to jump out of bed and take her into the garden in my pyjamas, where she darts around, nose into everything, small tail wagging furiously. Then it’s all go for the next two hours – chewing, galloping about with squeaky toys, leaping at our knees with flattened ears, beseeching eyes and scrabbling paws, and staring transfixed at the cats – one of which saunters past with a coquettish glance, while the other bushes out her fur and vanishes.

The rest of the day follows a two-hours-off/two-hours-on pattern of mad play followed by utterly flopped-out sleep. I try to do all my other tasks while she’s asleep. And you can bet she’s waking up, fresh for more fun, just before I’m quite ready. Boy, do I sleep well at night.

Anyway, in honour of Polly, I thought I would write today about dogs in books.

Dogs in books are a Good Thing. I always try to have a dog or two in each of mine. In my first book ‘Troll Fell’ there are three, all quite different: Peer’s faithful little brown mongrel Loki, his uncle’s unpleasant mastiff Grendel, and steady old Alf, the sheepdog at Hilde’s farm. And in my fourth book ‘Dark Angels’ (‘The Shadow Hunt’) there is the whole pack of Lord Hugo’s hounds, including the elegant white greyhound Argos. Country people have always had lots of dogs, and in past centuries most people were country people, so to have a lot of dogs in the books makes perfect sense. 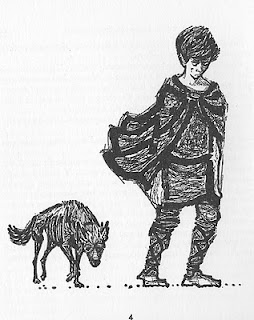 Historical fiction and dogs make me think immediately of Rosemary Sutcliff, whose books I devoured as a child. Sutcliff – who must easily win the title of Britain’s most loved writer of junior historical fiction – loved dogs, and there is a noble dog in many of her books - 'Whitethroat' in 'Warrior Scarlet', 'Argos' in 'Brother Dusty Feet' - but for me the most iconic is ‘Dog’ (in ‘Dawn Wind’, 1961, illustration by Charles Keeping), the young war-hound that the boy Owain finds by moonlight on the ruins of the battlefield:

…it was something alive in the cold echoing emptiness of a dead world. It stood with one paw raised, looking at him, and Owain called, hoarsely, with stiff lips and aching throat: ‘Dog! Hai! Dog!’ … [It] came, slowly and uncertainly… once it stopped altogether; then it finished at the run and next instant was trembling against his legs.
He was a young dog; the beautiful creamy hair of his breast-patch was stained and draggled, and his muzzle bloody in the moonlight… ‘Dog, aiee, dog, we are alone then. There’s no one else. We will go together, you and I.’

The brilliance of the writing is to show us, in the lonely and innocent terror of the dog and what he has been made to do, the full dreadfulness of war.

Most children love dogs and enjoy reading about them. Enid Blyton used the combination of ‘four children and a dog’ again and again. ‘The Famous Five’ would not be five without Timmy the dog, who is big enough to offer some protection and even to be of use to the plot – many’s the time Timmy carries that essential scribbled note (‘Help! Locked in the old castle! Our tutor is a spy: call Scotland Yard!’) attached to his collar. ‘The Secret Seven’ had a dog called Scamper, I think, and there’s a black spaniel in the ‘Barney’ books, and so on. 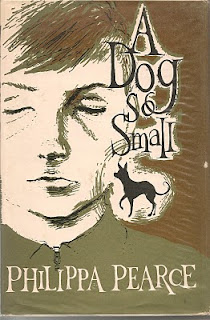 It used not to be unusual for even quite young children to be let out alone with a doggy companion. In the 1960’s my brother and I were allowed to roam about on our own on the moors or streets of our country town, so long as we took the dog with us. Stories about children with dogs were so common that many children must have believed ownership of a dog was some kind of right. But what about children who couldn’t have dogs? In Philippa Pearce’s 1962 classic ‘A Dog So Small’ (illustrated by Anthony Maitland), the child hero Ben longs for a dog, but lives in a London back street with no room for one. His grandfather promises him a dog for his birthday, but the promise can’t be kept:


…[Ben] cut the string around the parcel and then unfolded the wrapping paper.
They had sent him a picture instead of a dog.

And then he realised that they had sent him a dog after all. He almost hated them for it. His dog was worked in woollen cross-stitch, and framed and glazed as a little picture. There was a letter which explained: ‘Dear Ben, Your grandpa and I send you hearty good wishes for your birthday. We know you would like a dog, so here is one…’
…Ben said nothing, because he could not.

To compensate, Ben begins to fantasise about a dog of his own – ‘a dog so small you could see it only with your eyes shut’. If by some chance you haven’t read this book, I won’t spoil it for you by telling you the ending, only that it’s one of the most touching stories ever about longing, and the dangers of wish fulfilment, and of coming to terms with reality.

Not all dogs in children’s fiction are noble characters. Witness the memorably vain and selfish King Charles spaniel Wiggins, the pet of Maria in Elizabeth Goudge’s ‘The Little White Horse’:

It was the belief of Maria and Miss Heliotrope that he loved them devotedly because he always kept close at their heels, wagged his tail politely when spoken to, and even kissed them upon occasion. But all this Wiggins did not from affection but because he thought it good policy... The only parts of Wiggins that were not cream coloured were his long silky ears and the patches over his eyes. These were the loveliest possible shade of chestnut brown. His eyes were brown too, and of a liquid melting tenderness that won all hearts; the owners of the said hearts being quite unaware that Wiggins’s tenderness was all for himself, not for them.

Of course this is funny, and we forgive Wiggins just as Maria does, because he fulfils a comedic function that is another important role for dogs in books and in life. Young children often regard a dog as a clownish, non-threatening little brother or sister – reassuringly clumsier and more foolish than themselves. Yet, like clowns, dogs can get away with ‘naughty’ activities a child secretly enjoys. Loki, in ‘Troll Fell’, can express rebellion against Peer’s bullying Uncle Baldur by simply being himself – an irrepressible, lively little dog.

But now I’m wondering. Have there been many dogs in recent books for children? The only one I can think of, off-hand, is Todd’s dog Manchee in Patrick Ness’s ‘The Knife of Never Letting Go’ – a wonderful character in a wonderful book, though to be read with a large box of tissues handy, if you are tender-hearted. Are there many others? And if not, why not, and does it reflect the fact that children nowadays don’t get to roam around on their own with their dogs?


Whoops, Polly’s waking up. Got to go!

Posted by Katherine Langrish at 01:53