Singing your heart out 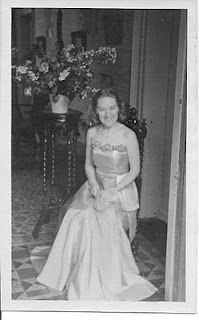 My mother - the one who turned her car upside down a few weeks ago: the bruises are fading - has always had a beautiful singing voice.  She would have liked to become a professional classical singer, but the War intervened, and then marriage and children.  Anyway she still used to sing in local concerts, and around the house; so I grew up singing too. I often find myself audibly humming away out shopping, though if my daughter is with me, she tells me off.

Now, besides classical music, my mother sang English folksongs – songs like ‘Cherry Ripe’, and ‘The Lass of Richmond Hill', and 'Early One Morning’ – and then, when I was at grammar school, music lessons always involved singing to the piano – songs such as Vaughan Williams’ ‘Linden Lea’.  So I went on singing away. (Sadly, choral singing doesn’t seem to figure much in schools nowadays.) 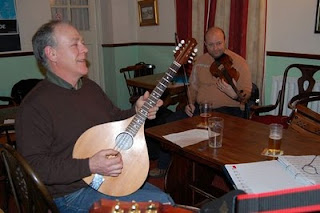 In my teens and twenties I had a shot at learning the guitar, but never got very good, unlike my  lovely brother John, who’s a brilliant amateur folk musician. He plays not only the guitar, but mandolin, concertina, whistle…and has even made several of his own instruments, like thebeautiful octave mandola in this picture. He’s been playing music for years in folk clubs and at home, and whenever he and his family come round to our house, we all get together for a music session which often lasts till well past midnight. So folk music is really part of family life.

It appeals to me as well because it’s all part of that spectrum of folk arts, from fairytales and legends through to crafts like quiltmaking and carving (neither of which I can do, though if I had another lifetime I’d love to learn) which belong to the anonymous poor or to women. And it's interesting how the arts traditionally practised by women – sewing, pottery, weaving – are still called ‘crafts’ rather than elevated as arts!
Let me recommend a fantastic book called ‘Women’s Work – the first 20,000 Years - Women, Cloth and Society in Early Times’ by Elizabeth Wayland Barber.  It shows - and I do mean shows, in photographs, how some patterns in folk weaving have been handed down literally over millennia. )

But back to music.  Many folksongs – perhaps most songs, full stop? – are collapsed narratives. They tell a bit of a story, often a love story, while implying the rest. In ‘The Banks of Sweet Primroses,’ a young man encounters a girl and asks why she is weeping, to be told that he himself is ‘the occasion of all her grief’. That’s their relationship, in a nutshell. There are many songs like it:

As I was a-walking and a-talking one day
I met my own true love as he went that way
Oh to see him was a pleasure but the parting was a woe,
For I found him false-hearted, he would kiss me and go.

This, from ‘The Cuckoo’ must, like the others, have been intended as a warning to young girls to be careful in love: but the sweetness of love is never denied, as the first verse (and the beautiful tune) suggest:

Oh the cuckoo, she’s a pretty bird, she sings as she flies,
She bringeth good tidings, she telleth no lies,
She sucketh white flowers to keep her voice clear,
And the more she singeth ‘cuckoo’, the summer draweth near.

I just love these, and I love the full length supernatural ballads like ‘Tam Lin’ and ‘True Thomas’ which tell entire stories. Folktales set to music – easy to imagine how once upon a time this was the ordinary way of telling a story – singing it in a knight’s hall, to the accompaniment of a harp. Music and stories go together.  Even the traditional tunes my brother knows so many of, the ones without words, usually have colourful, evocative titles – ‘Over the Waterfall’; ‘The June Apple’, ‘The Rakes of Kildare’, ‘King of the Fairies’.

Folksongs, like fairytales, deal with simple but big themes: love and death and childbirth. Often all three in the same song! Some are comical; some are sad. Myself I like to sing the plaintive, sad ones. They make me feel happy.

If you click on this link, you’ll find my brother’s website – Greyhound Music, after the Greyhound Inn at Letcombe Regis, Oxfordshire, a traditional pub with excellent beer, where John runs a folk music session twice a month. The website is a storehouse of information about and recordings of traditional tunes – with the music – together with some of John's own composing. If you're interested in folk music, it’s well worth a visit. Oh, and I’m there too, singing three of the songs I love. Just click on 'Traditional Songs':

If you’re passing near the Greyhound on one of the folk nights, stop by and join us.
Posted by Katherine Langrish at 02:30