Cats In Books (or boxes) 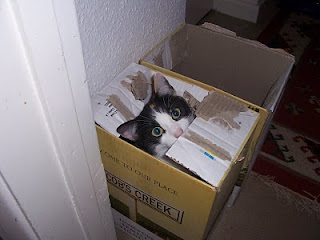 As I honoured Polly the puppy, a few weeks ago, with her ‘own’ post about dogs in books, I thought I should extend the same honour to my long-suffering cats, currently and none-too-patiently ‘training’ Polly that YOU DO NOT CH CATS.
Cats appear much more frequently than dogs in modern children’s literature.  I don’t know why this should be, but it is so.  I’ll be discussing some of the more recent offerings later on in this piece, but let’s start with some oldies. 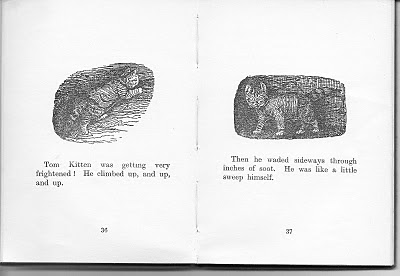 While Beatrix Potter wrote no books in which the main character is a dog, she wrote two entirely dedicated to the adventures of Tom Kitten – in the first, he is uncomfortably dressed up in that frilly blue suit and bursts all his buttons.  In the second, ‘The Tale of Samuel Whiskers’, we memorably learn ‘how very unwise it is to go up a chimney in a very old house, where a person does not know his way, and where there are enormous rats.’

It’s a dark and exciting story which I loved as a child – and later lived in a similar house, in , where one of our cats did exactly the same thing.  She went up the chimney and got lost in the flues.  She emerged on the roof at one point (we heard her wailing) but it wasn’t till twenty-four hours later than she landed with a thump and a cloud of soot in my brother’s bedroom fireplace (no fire lit) at two o’clock in the morning.  She was a black and white cat, the white parts normally snowy clean, but at that moment she was solidly black. 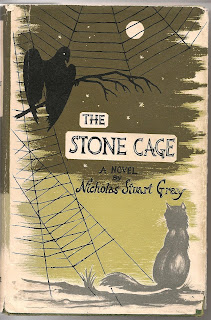 Anyway, cats in books.  Does anyone else remember Barbara Sleigh’s ‘The Kingdom of Carbonel’?  I just lapped up this series as a child.  I don’t remember too much about them now, except that the roofs of the houses became, at night, a magical kingdom where Rosemary’s black cat Carbonel ruled and roamed.  And then there was Ursula Moray Williams’ ‘Gobbolino the Witch’s Cat’: the story of a magical kitten who just wants to be an ordinary kitchen  cat – despite the blue sparks that crackle from his fur.  And – a writer now unaccountably neglected – Nicholas Stuart Gray’s magnificent cat narrator Tomlyn – outwardly cynical yet soft-hearted – in his retelling of the Rapunzel story, ‘The Stone Cage’. 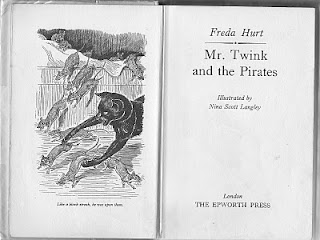 Another series I adored had no magic in it at all.  I don’t think I’ve ever met anyone who has read them, and they are long out of print, but Freda Hurt wrote a series of several excellent novels for seven to ten year olds about the effortlessly calm, collected and frighteningly brainy Mr Twink – a black cat with Siamese ancestry, who is the Sherlock Holmes of his little village, while his best friend the bluff retriever Sergeant Boffer takes on the role of Dr Watson.
(The author had a good understanding of the sort of friendship that can develop between and cat and a dog!) Between them, Twink and Boffer cope with any number of crises, from stolen bones (of the doggy variety), to kidnapped kittens, hysterical hens, and Red Tooth the (ratty) pirate.  These were detailed, well observed, lovingly written and often very funny books – with a great cast of other village and farmyard animals too, including another memorable cat, the one-eyed Irish rascal Cap’n Jake.
But the classic cat book of the 20th century has to be Paul Gallico’s tear-jerking, tender, beautifully observed ‘Jennie’ – the story of a little boy called Peter who runs into the road, is hit by a car, and somehow is transformed into a cat.  Terrified and lonely, he’s adopted by gallant little Jennie, a small and immensely lovable waif of a tabby cat, who teaches him how to behave like a real cat.  (I love the description of the ‘leg-of mutton’ position where she’s trying to teach him how to wash!) As gradually Peter grows and learns, he becomes Jennie’s much needed protector – which makes it all the more of a wrench when he turns back into a boy… 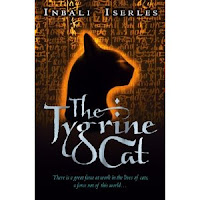 Unlike dogs, there still seem to be plenty of cats prowling the pages of children’s fiction.  Is it that the child-and-dog combination is less observable in contemporary life, and therefore isn't reflected in books, while cats have always been independent, operating in fiction without the need for a human side-kick?  The modern tendency is to celebrate this independence by imagining a rich, even epic existence for fictional cats.  No cosy village settings and domestic interiors; not even many witch’s cats – am I wrong? – but rainy cityscapes with adventurous felines slinking along wall-tops on desperate errands.  Cats as mystics, cats as outlaws, cats as heroes, like SF Said’s ‘Varjak Paw’, Erin Hunter’s ‘Warrior Cats’ – and Inbali Iserles’ splendid ‘The Tygrine Cat’, published by Walker, which  I read recently and thoroughly enjoyed.  Like Paul Gallico, Iserles has a sharp and loving eye for the body language of cats:
Pressed down low to the ground, the soft fur of his belly almost stroking the tarmac, Mati slunk under people’s legs to investigate the market place.
Mati is the Tygrine Cat, a young ‘catling’ and exiled prince of a cat kingdom in far away , and Iserles constructs a convincing mythology for him.  I love also the touches of cat ‘language’: cats call dogs ‘oolfs’, for instance, and humans are ‘hinds’ – an ever-so-slightly derogatory word for creatures wholly owned by cats, of course.  And the cats have a dream or spirit world called Fiåney, through which messages and forces of good and evil may travel.  But with all this, the actual world of the cats is a carefully imagined city marketplace, Cressida Lock – with its stalls, warehouses, trees and buildings.  Here it is from unhappy Mati’s cat’s eye view:
Although scarcely aware of the cold, Mati shivered.  Blinded by the rain, he lurched over the tarmac, ran into a puddle, backed up, stumbled, kept going.   For an instant, the market-place was illuminated by lightning. In that moment everything was white: market stalls, the boarded-up church, the rising pools of rainwater.
It’s a lovely, imaginative book with a sequel on the way. 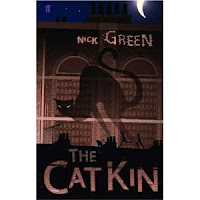 Another children's writer with an affinity for cats is Nick Green, whose book ‘The Cat Kin’ (and its sequel ‘Cats Paw’) takes the reader's identification with a cat hero to another level, and asks: What if a child could have a cat’s powers?   How cool would it be, to be able to jump ten times your own height, see in the dark, tread silently, be almost invisible?  What if you had a very unusual martial arts teacher who could show you how, via a forgotten ancient Egyptian skill called ‘pashki’?  What a wonderful advantage your new powers would give you, if you had to combat a bunch of evil vivisectionists experimenting on animals in a nearby factory!
Here is Tiffany, chasing Ben through the treetops:
A tree bearing bobbly green fruits fanned its branches like the spokes of an umbrella.  She bounded from spoke to spoke, catapulting herself off the last branch.  In a blink she was inside a cathedral of a horse-chestnut, emerald light glimmering through leafy windows… Up she dashed through the rafters as if ascending a spiral staircase, leaping out through a portal in the leaves.
These are two brilliantly exciting books, the first originally published by Faber, but about to be reissued by Strident.
Unlike dogs, who appear in books to support humans, cats are lone heroes.  A child will identify with the fictional child who owns a dog – and long for that companionship herself.   But a child who reads a book about a cat will identify with the cat, and be out there stalking the rooftops, fighting the fights.  Cats are adventurous yet cuddly, epic yet domestic.  They seem so cool, so aloof, yet they purr so contentedly when sitting on your lap.  Maybe Rudyard Kipling summed it up best in his story of 'The Cat WhoWalked By Himself' - the cat who manages to negotiate his place at the fire, attention from the Woman, and scraps from the meal, without ever having to compromise his treasured independence: 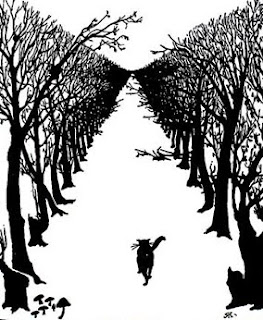 Posted by Katherine Langrish at 04:04