Review and Interview: 'The Fool's Girl' by Celia Rees 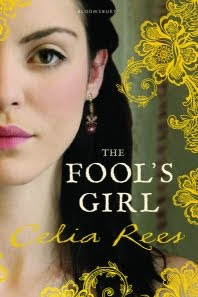 It’s 1601, and Will Shakespeare, always on the scent of ideas for a new play, comes across a couple of brilliantly deft street performers. One is a fool called Feste, the other a young girl called Violetta.  Intrigued, Will invites them to supper.
They were strangers, that much was clear, but more than that, there was a strangeness about them.  A Fool who was no man’s fool, and his boy who was really a girl.  He’d felt the old prickling sensation running through him.  He’d sensed a story here, and he was seldom wrong.
It’s always exciting to see a new novel by Celia Rees: she’s one of those rare writers who are consistently excellent yet always surprising.  In the recent past she’s written about female pirates and female highwaymen, (Pirates and Sovay) and Mayan prophecies and suicide cults (The Stone Testament).
Here she breaks more new ground: ‘The Fool’s Girl’ is a dark take on Shakespeare’s ‘Twelfth Night’.  It’s told in a number of different voices, and begins with Violetta, Viola’s daughter, describing the sack of her city by Venetian and Uskok pirates led by none other than her own uncle Sebastian.
In some ways, the book is a fascinating extension of the play.  Rees explores the currents of cruelty, melancholy and madness flowing under the play’s lyrical surface sparkle.  It’s a writer’s business – a writer’s delight – to ask ‘what if…?’ and spin a story out of it.  So Rees asks: what if Viola and Olivia, whose faux courtship is so central to the play, actually did prefer one another to their oh-so-suitable husbands?   What if Viola’s twin brother Sebastian was jealous of his sister on two counts: for making a better marriage than himself and for stealing his wife Olivia’s affections?  What if cross-gartered Malvolio harboured a furious and lasting grudge against the merry crew who tricked and abused him?  What if the ending wasn’t happy-ever-after at all?
So Rees weaves a fast moving story in which Violetta has to flee with Feste the fool as her companion, and arrives in to find other Illyrian refugees.  Sir Toby Belch is on his toper’s deathbed; the raddled Maria still his faithful carer.  Violetta has come to for one purpose – to reclaim a sacred relic stolen by Malvolio from the Illyrian cathedral.  But she’s in constant danger from the powers now ruling , and she’s going to need all the help Master Shakespeare can provide.  In turn, as Will Shakespeare learns her history, he garners wonderful material for a new play – Twelfth Night – in which he will transform the iron and lead of real life into glittering gold.
I had to keep reminding myself as I read this book, that Rees’s characters, though so recognisably named, are not Shakespeare’s.  In a switch-around that Shakespeare – who loved disguises, and boys playing girls playing boys – would surely have appreciated, what we have here is a novel masquerading as the real history behind the fictional Twelfth Night.  Rees’s characters are harder, grittier, less lovable than Shakespeare’s.  Feste, the Fool of the title, is particularly convincing:
The clown affected not to hear.  He pulled a black tunic over his sweating body, his pale torso corded and knotted, his arms like twisted rope.  He wiped his face with a rag, revealing a pale countenance almost as white as the paint that had covered it.
Rees’s Feste is a tough, wiry, commedia arte style of professional fool.  He’s edgy, street-wise, not quite reliable, occasionally cruel, but faithful to his friends.  Rees’s Shakespeare is a family man, half his mind in and half in the theatre, anxious about his company and his career – but, unusually, Rees also manages to suggest his genius: the thrill and tingle of power as a new idea takes hold.
The world of ‘The Fool’s Girl’ is darker and more dangerous than the world of ‘Twelfth Night’: this is the ‘real’ historical England in which severed heads sit on spikes along London Bridge, while Sir Robert Cecil plays European power politics (and tries to make Shakespeare his pawn).  At the same time there’s magic in the book, the sort of magic Elizabethans believed in: and hints of an older world, of the worship of Hecate, and of fairies in the Warwickshire woods. I just love the way Celia Rees uses all kinds of Shakespearean echoes.  Sir Toby’s death is reminiscent of Falstaff’s.  And recognise this?
‘There she is…’
Robin pointed towards the place where Violetta lay sleeping.  She had found a shaded bank, fragrant with thyme and violets.  She had meant to settle there to read while the lady tended her hives nearby, but the warmth of the sun, the scent of the flowers and the buzzing of the bees had sent her into reverie and then into sleep.
Surely this is the bank ‘whereon the wild thyme blows’ from ‘Midsummer Night’s Dream’?  Are the lord and lady really Oberon and Titania?  Is Robin really Robin Goodfellow, or just a tinker’s child abandoned in the woods?  Rees teases us with these questions – playing with our concepts of what is and isn’t real – as she suggests that in some way this fictional ‘reality’ is the raw material for Shakespeare’s plays. 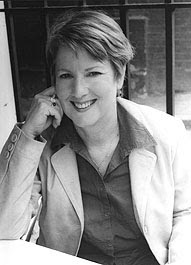 You’ve always said you would never write about real historical figures – so what tempted you to break that rule and write about Shakespeare?
I had an idea… and that idea involved Shakespeare as a character. I’m always compelled by an initial idea and have to follow it, even if it means I have to break my own rules. Writers’ Rules are there to be broken, anyway, and the work is often better for it.
Shakespeare has made an appearance in a number of other children’s books, usually as a sympathetic, understanding character, but I felt what was different about your portrayal was the way you were able to hint at how it might actually have felt to be Shakespeare the writer.  Did you draw from your own writing experience in order to do this?
At first, I found the prospect of writing about Shakespeare pretty scary and one of my ways to make him less daunting was to think of him as a writer – like me. There might be a bit of a difference in levels of talent but, I reasoned, there had to be some common ground. For example, that tingling feeling when you know you are on to an idea and the compulsion to follow it come what may. On a more mundane level, there is the business of juggling ‘real’ life and your writing life. Shakespeare must have had so many calls upon him, yet he still had to find the time and space and solitude to write. All writers know what that is like.
In recreating some of Shakespeare’s characters from ‘Twelfth Night’ did you have any pangs of regret – for example, at recasting Sir Andrew Aguecheek (‘I was adored once’) as Sir Andrew Agnew, a real villain?
Not really. I always found Sir Andrew a bit tedious and rather enjoyed turning him into a villain. The same with Malvolio. Our view of him in the play is partial – through the eyes of the ‘lesser people’ – very different from how Malvolio sees Malvolio. It was interesting to take him as seriously as he takes himself.
What made you decide on using a number of different voices as well as the authorial voice to tell the story – Violetta’s, Maria’s, Feste’s?
I always had it in my mind that the ‘survivors’ (Violetta, Feste and Maria) would tell Shakespeare about Illyria and what had happened there, so it made sense to tell that part of the story through their eyes, using their voices.
The world of ‘The Fool’s Girl’ is an unsafe and violent one.  Did it come as a surprise to find your exploration of what is after all a comedy leading you into such dark places?
Twelfth Night is full of unsettling contrasts. It is set in sunny , but begins in the wind and the rain of Viola’s storm driven arrival and ends with the wind and the rain of Feste’s final song. For me, one of the fascinations of the play lies in its opalescent quality: it is as changeable as the taffeta that Feste recommends that the Duke should wear. Although the play is a comedy, one is never quite convinced by the dual wedding, the happy ending, because the whole thing is shot through with darker elements. The madness, the potential for violence, the fooling that goes too far are held in fine balance but, if Shakespeare had so chosen, they could easily have tipped over into tragedy.
Thanks so much, Celia!  'The Fool's Girl' is a lusciously produced hardcover published by Bloomsbury, £10.99
Posted by Katherine Langrish at 01:21