Sailing with the Vikings 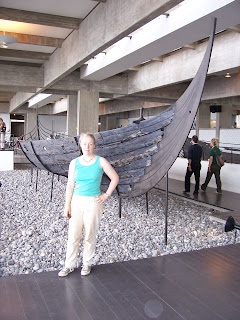 In about 1030 AD, the people of Roskilde Fjord in deliberately sank five old ships to block two of the three navigable channels leading into the fjord. This meant the only remaining entrance could easily be controlled, and any ship wishing to come down the fjord to town would be spotted, challenged, and perhaps charged a toll for use of the harbour and the chance to trade.  Handy for the townsfolk then – and handy now: for those five scuttled ships have been rediscovered, raised and preserved, and are now a major tourist attraction as well as offering invaluable insights into Viking ship construction.  As an amazing bonus, while digging the foundations for the new Viking Ships Museum  they discovered not one, but nine more Viking ships buried in the silt.  One of them is the very longest longship ever found – over 36 metres!
Replicas of those first five ships, the ‘Skuldelev ships’, have now been built, and it was on some of these – five years ago this month – we were about to sail.
Arriving at Roskilde on a hot sunny June evening, we walked down through the town, past the great cathedral where no less than 28 of the Kings of Denmark lie buried, across the slanting cobbled square, and downhill under cool trees to the broad fjord. 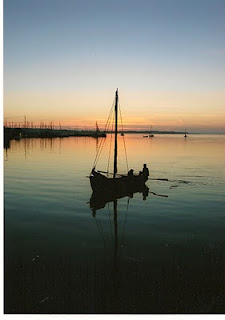 The sun was low, but it wouldn’t set properly till or later.  The western sky was full of colours, reflected in the fjord: stripes of tangerine, purple and blue.  And there they were, outlined against the sky: the tall masts and upcurved prows and sterns of four Viking ships, tethered to the jetty.  We walked past staring at them greedily: the two longships, Helge Ask and Sea Stallion of Glendalough; the fishing vessel, Kraka Fyr, the cargo ship, Roar Ege.  And then we saw a square sail, black against the sunset.  Another Viking vessel sailing towards harbour, just as it would have done over a thousand years ago…and two swans swam across its path, like little Viking ships themselves, proud prows uplifted.
I was there because I was in the middle of writing the third and final book of a series of historical fantasies about the Viking era, and in this book, ‘Troll Blood’, my characters would sail across the Atlantic to the shores of ‘Vinland’ – the far-distant northeast coast of America – just as Leif the Lucky, son of Eirik the Red, did over a thousand years ago. 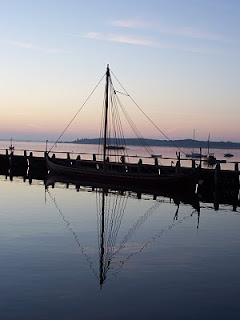 And, no matter how much research you do in libraries, no matter how many books you read, there’s nothing to beat hands-on personal experience.  I’d found out that the Viking Ship Museum here at Roskilde ran a week-long sailing course in which I could learn a great deal about how to handle those great square-rigged sails, and all sorts of general things about how it really felt to be on the sea in a Viking age ship.
Well, I learned a lot.  Here are some of my scribbled notes: 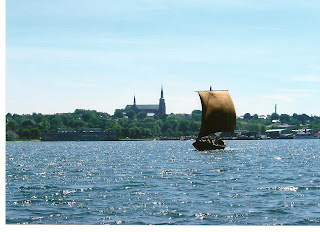 The sail towers over the boat – how big it is! – seems to cut off the sky and a large part of the horizon.
The chuckle and truckle of water running along the sides and under the bottom boards.  Jellyfish pass by the end of my oar – ghostly circles in the dark water, frilled, pulsating. 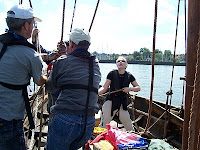 It’s really hard work on the sheets when we change the tack, wrestling in these yards of struggling, flapping sail – the ropes are harsh and soft at the same time, dark horsehair, softish but prickly to the hand.  We yank and yank again, and the rope comes in through the hole in the gunwale, soaking wet, scattering spray like a dog shaking its coat.
The boat heels, but nothing like so far as a modern yacht.  To change tack, the opposite lower leading corner of the sail changes and is fastened close to the bow to the ‘tack stick’.
Søren tells how his grandfather thought nothing of sailing thirty miles up and down the fjord to market, or of wheeling a barrow of live fish to Copenhagen and returning in a day 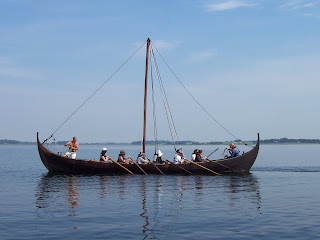 I learned how the mast could be taken down (unstepped) in a couple of minutes by flipping up the ‘shroud nails’; how a longship on a raid might cross the sea in three days rowing continuously: if one bench at a time rested, little speed was lost, so the resting period would ‘roll’ down the ship in a relay for the rowers to relax, drink, and answer calls of nature in turn.  And I learned that the round shields (so often depicted in overlapping rows along the ships’ sides) would only be hung out in an actual battle, ‘to cower behind’, said our skipper Søren, with a laugh.  ‘You can’t sail or row,’ he added, ‘with the shields in the way.’ 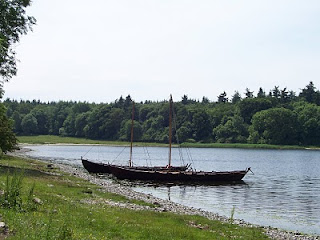 Of course, most of the technical stuff never made it into the book; but I came away with confidence to write more truly, more realistically, about my characters’ voyage – even though they were headed out into the wild , and I’d been sailing and rowing only in the fjord.  Who says research is dull?  We were there over midsummer.  On St John’s Eve, we camped in a hayfield with the boats on the shore below, ate barbecued fresh salmon, and watched the bonfires being lit along the fjord, and later the fireworks competing with a full, yellow moon. 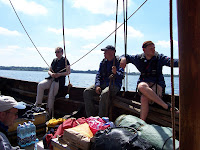 One of the things I liked best about being on our ship was the feeling of camaraderie amongst the crew, and the way, when things got lazy and the wind was blowing, those of us not needed to handle sails could lie back, relax, and tell stories, jokes and tall tales.  You realise how those Viking sailors must have done just the same thing.
Thorstein, leaning back on the benches, says shyly, ‘So do you want to know about trolls?  We have lots of stories in about trolls.’
I say I’d love to hear, so he begins. ‘There was once a farmer’s wife, a lazy woman who would not weave the wool her husband provided.  One day a huge, ugly woman came to the farm, and offered to card, spin and weave it for her – but on condition that the farmer’s wife should guess her name, and if she didn’t guess right, she would have to go away with the troll (for this is what the ugly woman was) and serve her.
So the farmer’s wife agreed.  She thought it wouldn’t be hard to guess the troll woman’s name.  The troll woman sat down and carded and spun all the wool, and wove it into good cloth as fast as lightning.  The farmer’s wife was very happy – but not so happy when she tried to guess the troll’s name.  She tried this name and that, and they were all wrong.
‘Very well,’ said the great ugly troll woman, ‘I shall come back tomorrow, and if you can’t guess my name then, you shall come and serve me.’
The farmer’s wife was very frightened and began to cry and wail because she didn’t want to have to go with the troll.  And that evening the farmer came home…  ‘A funny thing happened to me today, wife.  I was passing a hill and saw a cave, all lighted up.  And inside, a huge troll woman was dancing and singing, “Tomorrow I shall have a new servant to do all the work for me.  She’ll never guess my name is Gilitrutt!”’
I tell Thorstein we have the same story in , called ‘Tom Tit Tot’ (‘Rumpelstiltskin’ in , and I think there’s a similar North of story called Dame Habbitrot).  He adds with a smile, ‘But my mother’s father, who told me this story, used to say, ‘You know, probably the tall ugly troll woman was really the farmer himself – in disguise – to teach his wife a lesson…’ 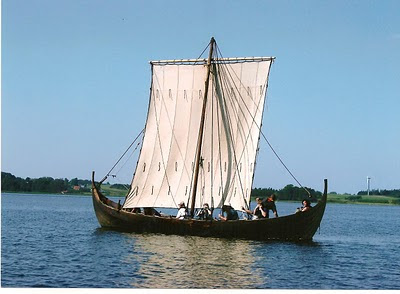 Posted by Katherine Langrish at 01:29