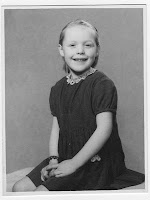 I can’t remember a time in my life when I wasn’t writing. My mother wrote; my grandmother wrote: it always seemed an occupation as natural as breathing. Back in my early schooldays, the emphasis was always on reading and writing. (Arithmetic fell on stony ground.) Fairytales, poems and Bible stories went in, and poems, descriptions and stories flowed out. 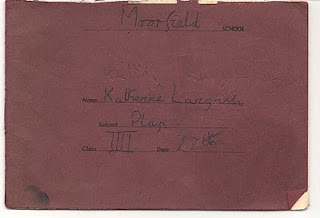 I still have an exercise book from when I was about eight. Remember those lined exercise books, with their supple paper covers in dusty blues, maroons or greys, two staples in the spine? The teachers cut them in half to make two smaller books with one staple each. On each page we wrote what were termed stories, but really they were only a couple of lines long: 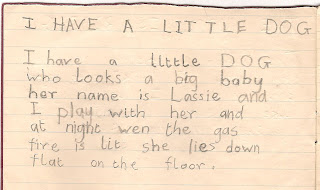 I have a little DOG who looks like a big baby her name is Lassie and I play with her and at night wen the gas fire is lit she lies down flat on the floor. 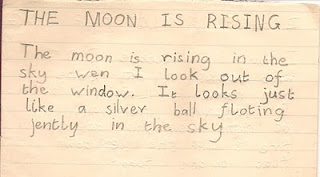 The moon is rising in the sky wen I look out of the window. It looks just like a silver ball floting jently in the sky

“Floating gently like a silver ball…” I was the same writer then that I am now.


When I was nine I began writing poetry. I’d heard that Shakespeare was the greatest English poet, but he’d died hundreds of years ago. Nobody had written better poetry since then? Look out world, I thought, here I come! I’d need to practise, of course, I knew that: but I reckoned that by the time I was grown up, I would probably be at least as good as Shakespeare. I spent my time reading, writing, and riding ponies. My schoolfriends admired my stories, especially if they were about horses – or later, about ethereal love affairs between lords and ladies ‘as beauteous as the stars’. I was rubbish at all subjects except English and Art, but in those I was sure I was good. Have at look at this epic treatment of thunder: Thor and all... 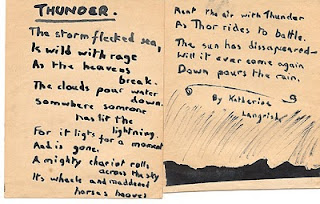 As you can see, I didn't have the natural lyricism that many child poets have. I think I was already struggling to be 'literary'.  Perhaps I read too much (lots of 19th century poetry from The Children's Encyclopaedia: I remember particularly admiring Byron's heavily overdone 'Mazeppa's Ride').

In order to become the new Shakespeare, of course, I would have to write a play or two. My verse drama career kicked off (and ended) with an adaptation – don’t laugh too hard – of ‘The Lord of The Rings’ in pantomime couplets. I took this very seriously. My group of friends was going to act it out in the apple loft of our barn (we lived in the country); and we spent ages making costumes out of curtains. The script has long since vanished, but I can still remember two lines from the play. Frodo and Sam are struggling across Mordor, and Frodo pauses to exclaim:


Pretty good, huh? See that neat poetical inversion, and the apostrophe? I can’t remember now if the play was ever put on - probably not; I think our parents weren't that supportive - but we got some fun out of the rehearsals. And meantime I was writing a book of short stories about magic. It was springtime: I used to sit outside scribbling, and the sunshine and the celandines somehow found their way into the stories.

“Once there was a golden land, full-filled with mirth and joy
And in that land a lady lived, more beauteous than the stars,
And she took joy in simple things
Like butterflies with coloured wings
And little flowers, and green green grass,
And crickets’ chirp, and birdsong…”


I'm not sure I've ever been happier.  Oh, it’s bad, I know it’s bad! But I didn’t know that then. All I knew then was that I was writing my absolute best: and to this day I don’t know a better feeling.


Soon after that I began a series of discoveries. I discovered Alan Garner, and started writing a long story based on ‘Celtic’ mythology. I discovered Rupert Brooke, and threw myself into sonnets beginning with lines like: Dream-like on the broad river drifting slow… I discovered Mary Renault and tried my hand at historical fiction. And, somewhere along the line, I discovered how to be self-critical…and the gates of the Garden of Eden shut behind me.
Posted by Katherine Langrish at 14:14