Witches (1) A word about witches 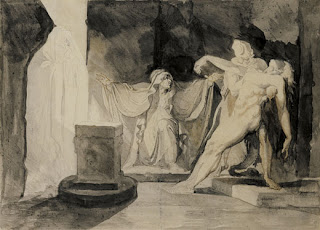 The earliest witch I can think of is the Witch of Endor in the Bible.  Though she’s never actually called a witch, the inference appears to be that if she has a familiar spirit and can communicate with dead, that’s what she must be. Nowadays she might be called a medium. (The column-header gloss of my 1810 Bible says quite definitely: ‘Saul confulteth a witch’) In spite of having ‘banished from the land all who trafficked with ghosts and spirits,' King Saul visits her secretly, in disguise and asks her to call up the spirit of Samuel. “Tell me my fortunes by consulting the dead,” he demands. The woman reluctantly obliges. It’s not clear from the Bible account that Saul ever sees Samuel at all: the woman does, and describes him: “An old man cometh up, and he is covered with a mantle.” Of course it ends in disaster for Saul, since the displeased Samuel prophesies his death. (1 Samuel 28).

It’s a complex story which may be read as critical of Saul’s hypocrisy in first banning consultations with the dead and then employing them himself. On the other hand, Saul is desperate. “I am in great trouble; the Philistines are pressing me and God has turned away; he no longer answers me through prophets or through dreams, and I have summoned you to tell me what I should do.” This is a clearly a story from a time of great religious conflict when the monotheistic worship of Jehovah was battling it out against the polytheistic religions of the area. Samuel tells Saul that one reason the Lord “has torn the kingdom from your hand and given it… to David”, is that Saul has “not obeyed the Lord, or executed his judgement against the Amalekites”. (Read: not massacred them.)  It’s a tough row to hoe, being king of Israel. But I don’t find the Bible account especially critical of the woman. Saul puts her in an awkward spot and she does what she’s asked, that’s all.

So why, in popular culture, are witches nearly always women? Or to put it another way round, why has women’s wisdom over the past few millennia so often been distrusted as likely to be ungodly in origin – and therefore evil? In one sense it’s obvious. Polytheisms are usually tolerant of rival beliefs, not seeing them as rivals. A monotheistic religion, if it is to remain monotheistic, cannot tolerate diversity of opinion.  This is also why so many monotheistic religions devolve into schisms and splinter groups, and persecute one another. The Christian martyrs suffered because of a head-on collision between a system that asked for recognition of all other gods, including the reigning Emperor, and a system that demanded recognition of none but One.

Monotheisms must control their adherents by strict codes of belief and behaviour. (Saul ought to have destroyed those Amalekites.) These codes are usually administrated by men. Controllers are always jumpy about the possibility of mutiny among the controlled. So a woman is approved as long as she adheres to the codes and the rules. If she steps outside those bounds, for example by living alone with no man to ‘govern’ her, or by performing cures or charms independently of the church’s rules, these will be disapproved. Her knowledge and supposed powers, not being monitored and channelled by the officials of God, must – the logic proceeds – come from the Other Place. Many a widowed or single woman, struggling to support herself in one of the few practical ways available to her in a man’s world, must have crossed this boundary from sheer necessity as much as from choice.

A couple of years ago, some children came to visit us whose parents are delightful born-again Christians. I suggested putting on a Disney video to keep them entertained, and their mother hesitated. Which one did I have in mind? Knowing that anything involving a witch would be disallowed, I did a rapid mental check – not ‘The Little Mermaid’, then, which has the Sea Witch – not ‘Snow White’ –

“The Sword in the Stone?”

She shook her head. “There’s a wizard in it.”

“But his powers don’t come from Christ,” she said gently.

Well, the children watched “The Incredibles” instead, and I refrained from pointing out that the ‘Incredible’ powers enabling the characters to run like the wind, extend rubbery arms down entire blocks, become invisible, or whatever it is, might just as well be termed magic. It’s all in the name, it seems.

I often wonder how a religion whose founder Christ once said ‘By their fruits ye shall know them’, and who told the parable of the Good Samaritan with the specific message that goodness can come in the shape of the person you are most prejudiced against, has so much trouble with the Harry Potter books. Surely what’s important is to recognise goodness in whatever shape it comes, even if it happens to be wearing a pointed black hat at the time?


Illustration shows William Blake's 'The Witch of Endor' - and do check out this wonderful collection of other witch-related art: Witches and Apparitions at the National Gallery
Posted by Katherine Langrish at 03:13