The Boy in the Golden Cape

I’ve been reading a remarkable book by Elizabeth Wayland Barber and Paul T Barber, ‘When they Severed Earth from Sky: How the Human Mind Shapes Myth’, Princeton UP, 2005. It’s about the persistence of real physical information in ancient myths, and begins with a Klamath mythical story from Oregon, all about the creation of Crater Lake. The story, recorded in 1865 – even when you make allowances for European translation, rewording, and bias – describes a battle between ‘the Chief of the Below World’ and ‘the Chief of the Above World’ involving fire, burning ashes and the disappearance of an entire mountain, in such a way as certainly to encode an eyewitness account of the eruption of the volcano geologists deduce once stood 14,000 feet high between Mount St Helens and Mount Shasta. The catastrophic explosion of its magma chamber pulverised the entire mountain and formed the giant crater which now forms Crater Lake. And here’s the thing: the eruption has been ice-dated (from ash layers) to nearly 7,700 years ago. So the Klamath explanation of this event has been handed down for millennia. 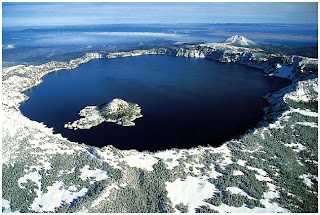 According to the Barbers, this isn’t even unusual. Hawaiian mythical accounts of battles between various of their chiefs and the volcano goddess Pele can be closely correlated to radiocarbon dates for different lava flows. And I was absolutely fascinated by their chapter on the (massive) eruption of Thera in the Mediterranean, in around 1625 BC: check out this passage from Hesiod’s poem ‘The Birth of the Gods’, about the battle between the gods and the Titans:

…wide heaven groaned, shaking, and great Olympus shook… and heavy quaking reached gloomy Tartarus… And the cry of both sides reached the starry sky as they bellowed and came together with a great battle shout. Nor did Zeus hold back his might, but now indeed…from Olympus he came, hurling lightning continually, and the bolts flew thickly amid thunder and flashing from his powerful hand…and all around the great boundless woods crackled with fire. …The hot blast surrounded the earthborn Titans, and a boundless flame reached to the bright upper air… and it seemed, facing it, as if Earth and wide Heaven above collided, for so huge a boom would roll forth, as if Earth were being hurled up while Sky were falling down from above…

Hesiod was writing about 700 BC, so nine hundred years after the eruption – but most poetry had been oral up to his time, and it’s highly likely his account dates back much, much further.

And wouldn’t it be odd if such a cataclysmic eruption hadn’t been talked and wondered and sung about by the peoples ringing the Middle Sea, for centuries and centuries? The Barbers point also to the Exodus account in the Bible, in which Moses leads his people out of Egypt, guided by a pillar of smoke by day and a pillar of fire by night: ‘for people moving north down the Nile valley to where the Delta opens out, an eruption pillar from Thera would indeed be ahead of them.’  Though they go on to caution: ‘whether the Exodus… actually occurred in 1625 BC is another matter. Time often gets foreshortened in the telling of myths… thus Exodus as we have it may contain details from several different time periods.’

In recent years, we in the mythic and fairytale community have grown accustomed to the psychological exploration of myths, the discovery of their emotional relevance, so it’s refreshing to be reminded that some myths may have sprung from simple matters of fact. This is not to explain them away, either, since mythologizing is all part of the long struggle of humanity to make sense of the world. A calamity like the Japanese tsunami requires an explanation, which nowadays is promptly delivered by science, via experts appearing on our television screens, details about plate tectonics and so on. Interesting and accurate as this is, I don't know how much comfort it provides. But without scientific knowledge of the immediate physical causes, the best way to make sense of the thing – to bring it to some kind of proportion – is to inject it with emotion, and by analogy with human passions, suppose it to be caused by the anger of gods of God. And this is consolatory, because understandable. Even when the causes of natural disasters are known and understood by most people, we still struggle to ‘make sense’ of the unbearable loss of innocent lives.  'Human kind/Cannot bear very much reality'.

Well, do read the book, which is wise and fascinating and wonderful. And here’s an epilogue, not in the book at all. In the British Museum is an utterly gorgeous golden cape. It dates to somewhere between 1900 – 1600 BC, and was found by workmen in Mold, Wales, in 1833. (They threw away the bones it clothed, tore it to pieces and shared it out, and it had to be painstakingly reconstructed, but that’s another story.) I’ve seen it myself and the gold is as bright and yellow as summer buttercups. 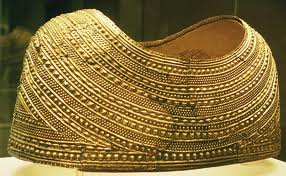 It was one of the 100 objects in BBC Radio 4’s ‘History of the World In 100 Objects’, so you may have heard about it there. The gold is so fragile that it could only have been used ceremoniously: and it’s too small for a man, so must have belonged either to a woman, or a youth. Maybe a teenage king or priest was buried in it.

But the mound those workmen were digging into was in a field called Bryn-yr-Ellyllon, which means ‘the Hill of the Fairies’: and the legend of the hill was that it was haunted by a ghostly boy, all clad in gold. Just think of that for a moment...  Isn't it possible, then, that the sight of a young man being laid to rest in his shimmering golden cape so impressed and touched the onlookers, that for nearly four thousand years if a child said, ‘Mother, who’s buried in that hill?’ the answer was: ‘A boy all dressed in gold'?