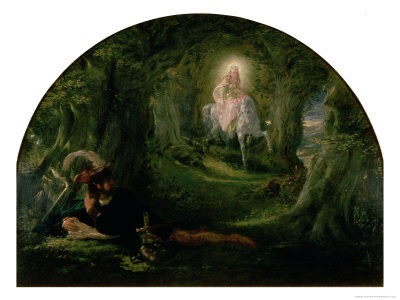 What makes a writer choose one subject over another, one genre over another?  What draws one writer to contemporary fiction, another to historical fiction, fantasy, or thrillers?  While I know and admire a number of authors who can handle a variety of forms (Gillian Philip and Nicola Morgan, for example, who seem equally and brilliantly at home with both gritty thrillers and historical or fantasy novels) – there are others like myself who stick to a single last.  From the age of about ten, writing fantasy has been my first and only love.

This doesn’t mean to say that I haven’t had qualms.  I’ve asked myself, in the past, what relevance fantasy has or can have to the problems of life.  Can it really be serious?  Shouldn’t I – shouldn’t I? – be writing something more meaningful?

But I have come to the conclusion that what is done with a whole heart, with love, and with as much artistic truth as I can personally muster, must be good enough.  More than that is out of my control.  I don’t have a choice.  There is in writing, as in all art  – Susan Price has eloquently written about it for Katherine Robert's Muse Mondays, here – something that feels remarkably like outside inspiration: a fierce compulsion that grasps you by the hair and demands and absolutely requires: this is what you will write about: this and this alone. If you don’t obey it you feel restless, haunted. You cannot ignore it.  You cannot decide to write about something else.  (Or if you try, what you turn out will be stale, flat and unprofitable.)

The problem is that the divine or daemonic impulse will only take you so far.  It sets you going and then leaves you to stumble on alone as best you can.  If you’re lucky, you’ll get occasional vivid flashes to light your path, but for the rest, you’ll need patience, persistence, technique and plenty of common sense.  This applies no matter what type of fiction you happen to have fallen in love with.

But it’s good to be aware of the particular pitfalls of your chosen genre.  I wouldn’t like to speak for others, but in the early mid stages of my career as a fantasy writer I was anxious for a while about the possibility of getting carried away by colourful but superficial effects, and forgetting or neglecting emotional truth. What it boils down to is, that whatever their circumstances, the characters should have space to live and breathe.  Ulysses isn’t just a man island-hopping from one astounding adventure to another: he’s a war-weary veteran desperate to get home.  Malory’s Lancelot isn’t merely the best knight in the world and a hero sans reproche, he’s a breathing, fallible man torn between his honour and his sense of sin: his love for Arthur and his love for Guinevere.  He knows he’s unworthy of the Holy Grail – so when he’s finally allowed to perform a miracle of healing, he reacts with uncontrollable tears, weeping ‘like a child that has been beaten’.

Here’s a short ballad I wrote to warn myself about the dangers of following the queen of faerie rather too far into the dry lands.

As I walked out one summer day,
under the summer sky,
I saw about me the hills of summer
quaking with heat, and I

wondering saw a fair lady ride
down a slope in my mind:
it seemed she was the queen of fays
with the fairy host behind;

but they passed over the dry grass
through the quivering air
like vague thoughts passing
that are hardly there:

and where was the green velvet
and the rich jangling bells,
and the colour, and the dazzle
that the ballad tells

bewildered young Thomas the Rhymer
under the Eildon tree? –
thinking she was the queen of heaven
he bent his knee:

but it’s no, no, she says, no,
I am not what you think.
I cannot give you water and wine,
only dust to drink:


and you shall gain nothing from me
of knowledge of men;
but you shall blow down the hillside
ghostly in the sun.