Now is the month of Maying... 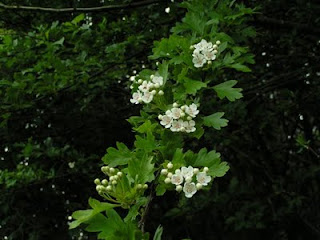 We drove up to Yorkshire last weekend, partly to take my daughter back to university, partly to visit old friends in the Dales.  My mother came along with us, and was exclaiming all the way up the M1 about the masses of hawthorn blossoming everywhere.  I love hawthorn – its curds-and-cream, compact, sweet-scented flowers are like ornate jewellery when you get up close.  The blackthorn which comes out earlier in the year is whiter, more delicate and elfin, more poetic.  But hawthorn is as sturdy and lavish and sure of itself as a Tudor rose.

When I was writing ‘Dark Angels’ (‘The Shadow Hunt’, if you are in the US), which is set in the 12th century, I wanted to get in some of that feeling for spring, that explosion of joyful delight in the beginning of the warm months and the escape from the dearth and pain of winter, which is so obvious in medieval lyrics like ‘Lenten is come with love to town’, or  ‘Bitwene Merch and Averil/when spray beginneth to spring’, or simply ‘Sumer is i-cumen in’.  If you know you might easily not survive winter, the phrase glad to be alive means so much more…

Since one of the main characters in the book, Hugo, is a troubadour knight (with a tragic past) I tried my hand at some faux-medieval verse for him.  First of all, though, I looked at some genuine troubadour songs (written, naturally, in early French).  Here is one – the poet is anonymous, which is by no means always the case – with my own somewhat approximate translation beneath each verse:

Would you like me to sing you
A fine song of love?
By no peasant was it made:
But a gentle knight who lay
With his true love in his arms
In an olive tree’s shade.

Her chemise was of linen
And her white pelisse of ermine
Of silk was her dress.
Her stockings were of iris leaves
And her slippers of mayflowers
Her feet to caress.

Her belt was of leaves
Which grow green when it rains,
Her buttons of gold so fine.
Her purse was a gift of love,
And it hung from flowery chains
As it were a lovers’ shrine.

And she rode on a mule
The saddle was of gold,
All silver were its shoes:
Behind her on the crupper
To provide her with shade
Three rose bushes grew.

As she passed through the fields
She met gentle knights
Who demanded courteously:
“Fair one, where were you born?”
“From France am I come,
And of high family.

“The nightingale is my father
Who sings from the branches
Of the forest’s highest tree.
The mermaid is my mother
Who sings her sweet chant
On the banks of the salt sea.”

“Fair one, well were you born!
Well fathered, well mothered,
And of high family.
If God would only grant
That you might be given
In marriage to me!”


You can hear it sung here:


I just love that – I love the almost physical delight in the natural world, the celebration of springtime, and of the lady as a kind of fairy queen both of whose parents are the sweetest possible singers: the nightingale, and the ‘sirene’ or mermaid.

Here is the song I made for Hugo, whose wife is dead:

When all the spring is breaking and blossoming
And the hedge is white with blossom like a breaking wave,
That’s when my heart is bursting with love-longing
For the girl who pierced it, for that sweet wound she gave.

And I hear the nightingale singing in the forest,
Singing for love in the forest, ‘Come to me, I am alone –’
Better to suffer love’s pain for a single kiss
Than live for a hundred years with a heart of stone.

And just to show that the subject of spring, hawthorn blossoms, and heartache isn’t restricted to the Middle Ages, here’s another lovely poem, from Edward Marsh’s anthology ‘Georgian Poetry 1916-1917’ : it’s by John Drinkwater, and it’s called ‘Birthright’.


Lord Rameses of Egypt sighed
Because a summer evening passed;
And little Ariadne cried
That summer fancy fell at last
To dust; and young Verona died
When beauty’s hour was overcast.

Theirs was the bitterness we know
Because the clouds of hawthorn keep
So short a state, and kisses go
To tombs unfathomably deep,
While Rameses and Romeo
And little Ariadne sleep.