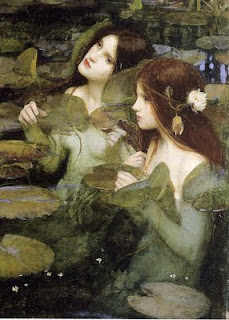 You can touch it, but you can’t hold it.  It runs between your fingers.  It flows away in streams, in rivers, talking to itself.  It’s a metaphor for time.

It reflects things – trees, the sky – but upside down, distorted and fluid.  Peer over the brink and your own face peeks up at you, like yet unlike, pale and transparent.  It could be another you, living in another world.  Maybe in The Other World. After all, you can’t breathe water...

You can drink it, wash in it, water your fields with it.  It turns your mill wheel to grind your corn, but it can also drown you or your children and sweep you away.  Homely, treacherous, necessary, strange, elemental, no wonder that we populated it with spirits. Goddesses like Sabrina, or loreleis, ondines, naiads, nixies: sly, beautiful, impulsive but cold-hearted nymphs whose white arms pull you down to drown.  To say nothing of kelpies, in whom the brute force and treacherous nature of water gets its true personification...

I’ve always loved the well known ‘Overheard on a Salt Marsh’ by Harold Monro, a dialogue between a goblin and a water nymph. 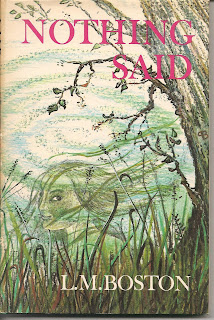 It’s a poem which can be found in Lucy Boston’s lyrical short book ‘Nothing Said', Faber 1971 – in which the heroine Libby finds a green glass bead in a stream – and is one of many fairytale and literary references in Delia Sherman’s witty and delightful ‘The Magic Mirror of the Mermaid Queen’,Viking 2009: the heroine Neef (the Official Changeling of New York’s Central Park) hears of a clue to the whereabouts of the magic mirror she is searching for:

“It’s in Riverside Park… This goblin’s been howling.  Everybody’s heard it that lives on Riverside Drive.  …Howl, howl, howl all night, every night.  Nobody’s got any sleep…”

Then again, rivers can be gods, like TS Eliot’s ‘strong brown god,’ the Thames, or Stevie Smith’s ‘River God’:

I may be smelly and I may be old,
Rough in my pebbles, reedy in my pools,
But where my fish float by I bless their swimming
And I like the people to bathe in me, especially women.
But I can drown the fools
Who bathe too close to the weir, contrary to rules.
And they take a long time drowning
As I throw them up now and then in the spirit of clowning.
Hi yi, yippety-yap, merrily I flow,
Oh I may be an old foul river but I have plenty of go…


King Arthur’s sword Excalibur comes from under the water:

They rode till they came to a lake, that was a fair water and broad, and in the midst of the lake Arthur was ware of an arm clothed in white samite, that held a fair sword in that hand.

Merlin and Arthur are advised by a ‘damosel’ (the Lady of the Lake) to row a barge over to the arm:

And when they came to the sword that the hand held, Sir Arthur took it up by the handles… and the arm and the hand went under the water.

At the very end of the Morte D’Arthur, at Arthur’s command Sir Bedivere brings himself (on the third attempt) to throw Excalibur into the lake again:

And he threw the sword as far into the water as he might; and there came an arm and a hand above the water and met it, and caught it, and shook it thrice and brandished, and then vanished away the hand with the sword in the water.  So Sir Bedivere came again to the king and told him what he saw.

“Alas”, said the king, “help me hence, for I dread me I have tarried over-long.”

It’s as though only once the return of the sword has been accomplished can Arthur set off for Avalon in the barge full of queens and ladies clad in black.  We know that the Celts made many offerings of swords and weaponry to rivers, as these Bronze Age examples show.  What the significance was, we can only guess, but even today people throw coins into fountains and ‘wishing wells’. 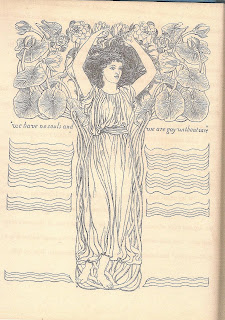 In Frederick de la Motte Fouqué’s ‘Undine’ (1807), a knight marries a river spirit, Undine, and swears eternal faithfulness to her.  However, his previous mistress, Bertalda, sows suspicion of Undine in his mind, and he comes to regard her unbreakable bond with the waterspirits – and especially with her terrifying uncle Kuhlborn, the mountain torrent  – with fear and disgust.  He repudiates his union with Undine and prepares to marry Bertalda instead.  There is a genuinely spine-tingling climax, as the well in the castle bubbles uncontrollably up to release the veiled figure of the Undine, who walks slowly through the castle to the knight’s chamber. In my 1888 translation:

The knight had dismissed his attendants and stood in mournful thought, half-undressed before a great mirror, a torch burnt dimly beside him.  Just then a light, light finger knocked at the door; Undine had often so knocked in loving sportiveness.
“It is but fancy,” he said to himself; “I must to the wedding chamber.”
“Yes, thou must, but to a cold one!” he heard a weeping voice say.  And then he saw in the mirror how the door opened slowly, slowly, and the white wanderer entered, and gently closed the door behind her.
“They have opened the well,” she said softly, “And now I am here and thou must die.”

Ignore the force of water at your peril.  And what follows isn’t a fanciful poem at all.  It’s a tribute to the volunteers of Clapham Cave Rescue Organisation up in Yorkshire, who spend a good part of every year pulling people, dead or alive, out of rivers and water-filled potholes.

As the wet rescuers come stumbling out of
the greedy water, gasping from their dive,
“Christ,” they say, spitting, pushing up their masks,
“it took us all our time to stay alive.”

Somewhere below that creaming soapy surface
the drowned man is rolling, arms flung out:
thrown against rocks, knocked, tumbled and abraded,
kissing the water with his open mouth.

The weary divers huddle on the pathway
now black and slippery with the driving rain.
“We’ll find him further down.”
They know he’s dead.
They lug the gear downstream to try again. 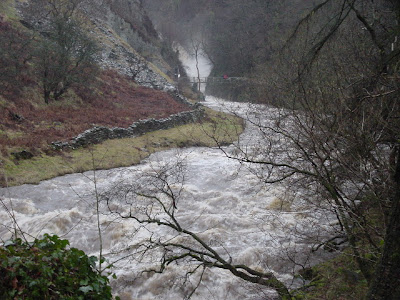