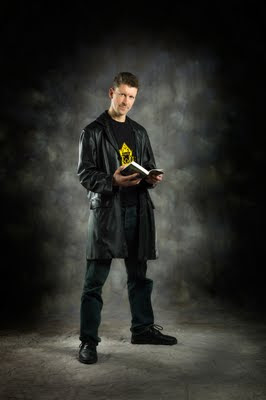 So here is a photo of my friend Nick Green, looking like a super-cool, turbo-charged, kick-ass dude, pretty much exactly the way kids imagine every [male] author ought to look. I mean, your average ten-year old wouldn’t feel like an idiot reading one of his books, would they?

It has been very difficult persuading Nick to part with enough information for me to make a reasonable go of writing this introduction.  I suspect him of being the kind of guy who refuses to part with information even when tied to the chair in the underground room, with the water rising around him and the candle slowly burning through the cord holding the anvil suspended over his head.  Out of sheer bloody-mindedness, no doubt.

At any rate, after applying a good deal of pressure I managed to extract only this:  Nick is the second oldest and second tallest of four brothers, and the only one who isn’t ginger.  It was while working for a children’s book club that he made the rash decision to start writing books as well as selling them.  He read English at Edinburgh University, and now lives in Hertford with his wife and an itinerant population of cats.

Fortunately, I have other sources of information. I first heard of Nick’s debut novel ‘The Cat Kin’ because it was news.  Nick self-published the book – yes, you heard – believing in its worth: and he was absolutely right.  After it was reviewed in The Times by Amanda Craig, who called it ‘a gripping adventure’, it was bought by Faber & Faber.  Nick was writing the sequel, there was going to be a trilogy, and everyone seemed to be talking about it.  What a brilliant success story!  So of course, I whizzed out and bought a copy… and was entranced.

It’s a classic children’s adventure story with a fantasy/sci-fi twist: Two inner-city kids, Ben and Tiffany, each living tough lives, join an after-school gym class run by a strange woman called Mrs Powell.  And it turns out that what she teaches is the lost Ancient Egyptian art of ‘pashki’ – moving and sensing like a cat.  Soon Ben, Tiffany and the rest of their class are leaping over London’s rooftops, slipping near-invisibly through the streets – and about to need all nine of their new lives as they discover the very dark deeds taking place in the old factory with the chimney like a wizard’s tower, visible from Ben’s apartment block…  The plot is exciting, the writing is fresh, funny and perceptive.  Here, the children learn to climb trees like cats, up on top of Primrose Hill…

Perched over the dell, [Tiffany] parted the leaves.  The city of London looked near enough to touch.  Office blocks floated in the exhaust haze like fairy towers, the wheel of the London Eye no more than a charm bracelet dropped among them.
… A tree bearing bobbly green fruits fanned its branches like the spokes of an umbrella.  She bounded from spoke to spoke, catapulting herself off the last branch.  In a blink she was inside a cathedral of a horse-chestnut, emerald light glimmering through leafy windows, its mighty boughs straining higher like a spire towards the sun.  Up she dashed through the rafters as if ascending a spiral staircase, leaping out through a portal in the leaves.

But there’s a dark side to the book, too.  Tiffany is struggling with the reality of her brother’s illness.  What if illegal experiments could produce a drug to cure him?  Ben and his mother are under threat, their apartment wrecked by thuggish developers who want them to move out.  And both children have to learn responsibility for their new, sometimes frightening powers:

The cat-self he had awakened, his Mau body, had reflexes too fast for him to control.  If he was hit, he would hit back, no matter who got hurt.  … He shrank inside, just as he had when he was five and had accidentally set the waste paper basket on fire, thinking the flat, the whole world, would burn down.  … He hadn’t meant this to happen. What had he done?

And there turned out to be a dark side to the success story of Nick’s publication, too.  Despite many good reviews, despite the fact that by this time Nick had written the sequel, Faber & Faber decided not, after all, to go ahead with publishing this second volume, ‘Cat’s Paw’.

This sort of thing is not uncommon these days, and it’s a crushing blow on a scale that perhaps only another author can fully understand.  Bloodied but unbowed, Nick decided that this left him with only one thing to do – self-publish ‘Cat’s Paw’, and be damned to 'em.

Which he did.  And lo! in the best of fairytale traditions courage and tenacity, allied to faith and talent, paid off.  ‘The Cat Kin’ was taken by valiant ‘Strident Publishing’ and republished with a brand-new cover.  Strident publishes the second book of the trilogy,‘Cat’s Paw’, in August, and Nick is busy writing the third.  And contemplating a new trilogy, ‘Firebird’.

With all that going on, I’m grateful to Nick for taking the time to write this Fairytale Reflection – and not at all surprised, really, that he’s chosen that tale of aspiration, fortitude, hard work …and cats:


Dick Whittington and His Cat: (or The Magic of Cats) 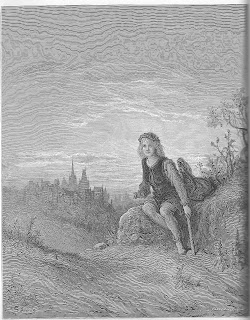 
Is ‘Dick Whittington and his Cat’ really a fairytale? I’m going to call it one. Even though there is no actual magic (but see below), most of the ingredients are there: the poor and naive youth, the quest, the hardship, and at least a semi-supernatural element in the prophecy of the Bow Bells, calling the young Whittington back from Highgate Hill. I would argue that ‘Dick Whittington’ is not just a fairytale, but a particularly interesting one, being the only one (to my knowledge) that features a real person.

The historical Richard Whittington, of course, was Lord Mayor a total of four times (but legend ignores that as it doesn’t scan). Also, he was never particularly poor, and no-one knows if he really kept a cat. According to my diligent academic research (Wikipedia), the story’s origins lie further back, in a Persian folktale of a youth and his cat, onto which the legend of Whittington was later grafted. We can only guess the reason for this, but by all accounts Richard W was an all-round good egg and probably deserved it.

DW and C (as I shall write henceforth) is a simple enough yarn. A young lad comes to London seeking his fortune, following a rumour that the streets are paved with gold. Of course, they aren’t, and he ends up as a scullery boy. But his master is a merchant, and offers a place on his ship for anything that Dick might want to sell. All Dick has is his beloved cat, so reluctantly he sends that. Then, despairing of his fortune and missing his cat, Dick runs away, only to be checked on the edge of the city by the calling of the Bow Bells, who seem to be foretelling his future. He will become Lord Mayor of London, not once, but three times. Dick turns back, and arrives at his master’s house to astonishing news. The King of Barbary (whose kingdom is plagued by rats and mice) has bought his cat for a huge sum of gold. Dick’s fortune in made, and his destiny set in motion.

It’s a heartwarming story, but what makes it a fairytale? Someone being elected to high office three times isn’t a fairytale – that’s Margaret Thatcher. Even the prophetic bells aren’t really enough to elevate this story to the level of fairytale. There has to be another element that makes it so enduring.

Think of the story of DW and C, and it’s always the same image: the youth treading the roads with his belongings in a sack on a stick, and a cat trotting faithfully beside him. If that animal were a dog, you’d have no story. ‘Dog follows human’ is not news. ‘Cat walks with human’ is the stuff of legend (unless your name is Jackie Morris). And the cat is what people remember. I mentioned before that no cats are recorded in the life of the historical Richard Whittington – and yet the creature still keeps popping up in tantalising glimpses, much as you’d expect a cat to do. In his will, Whittington ordered the rebuilding of Newgate Prison, and over one of the gates you could find the carving of a cat. Later, in 1572, Whittington’s heirs presented a chariot with a carved cat to the Merchants’ Guild. And in front of the Whittington Hospital, on Highgate Hill where Dick was said to have turned around, the cat keeps watch in the form of a statue. Despite all his philanthropy and good works – not to mention his real, provable existence – Whittington’s perhaps-mythical cat has effortlessly outlasted him. It’s not fair, is it? 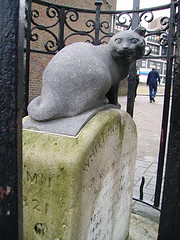 In the story, it’s the cat that fills the role normally occupied in a fairytale by magic. It manages this even though it does nothing extraordinary – it doesn’t talk or dress up like the animal in Puss In Boots, it just goes around being a very good mouser and Dick Whittington’s dearest friend. In short, it does what any cat does. Because what a cat does, is magic.

This idea is at the heart of my own series of books, 'The Cat Kin'. In this, a group of London children join a class where they learn to move, see, hear and fight like cats. The art of ‘pashki’ is entirely my invention, but such is the universal appeal and mystery of cats that many readers ask if pashki is in fact real, or based in reality. Indeed, if you search the web, you can find claims that it is (and I didn’t put them there). Like Whittington’s cat, pashki seems to want to have a life of its own. Cats, for whatever reason, continue to exert their mystical fascination over us human beings.

One final reason why I love the story of Dick Whittington and his Cat, is that it’s a great parable for an aspiring writer. Dick follows a bright dream initially, only to be bitterly disappointed, giving up and turning away from it. And then, when all seems lost, he is called back to his struggle with the promise of a great reward – a threefold reward. And since I’m just now finishing off the third book in the Cat Kin trilogy, you could say that this ending rings a bell for me too. 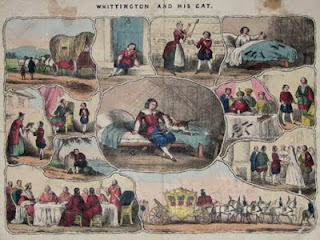