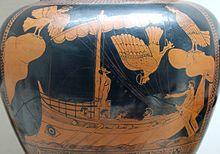 The sirens were originally young girls, the friends of Persephone, who were changed into birds with girls' faces after she was abducted by Hades.  Of course, this means they are the companions of the powerful goddess of death, and their irresistable song will take your spirit into the Otherworld (while your body lies lies rotting in their meadow full of bones).

So this quick post is another poem. This is one of mine: and it's the only poem I ever wrote which - rather than being consciously composed - seemed to come to me through the ether, as though I were listening to a very faint voice on a distant radio and trying to make out the words.


It's also from a long time ago, when I was having an internal discussion with myself about whether I should be writing fantasy... (Was fantasy 'serious'?  Wasn't it rather frivolous - derivative - escapist? Was it something that leached energy from reality, rather than enhancing it? I wanted to write fantasy, but I worried about it.)

Then this poem arrived and informed me direct from the muse that it didn't matter whether I worried or not.  I have no choice about it.  I write what I am compelled to write, and there really is no escape...

If you try to jump ship, you merely drown.

'Come here, young man,' the siren sings
from her unfaithful rock.
The knowledgeable dreamer
closes his crew's ears to the ringing sound,

but, all the summer, hears across the water
the cheated music slide
after his ship: 'Come back...'
There is no escaping from the experience.

Presently he approaches the cave-riddled land
of Giant One-Eye,
whose log-wide gaze
the dreamer is, of course, clever enough to burn out


but cannot help his friends, being No Body.
They were dreams, anyway.
With inevitable luck,
the boulder smashing into the sea misses him -


and so it goes on.  On Circe's smoke-wrapped island
he is protected
by a magic herb,
but is permanently changed, unlike his comrades:


she saved her subtler incantations for him.
And so, on waking -
having reached home safely -
he finds that he is still a prisoner,


and all his clever tricks of touching wood,
crossing his fingers, tongue in
cheek during promises,
never fooled or hindered anyone at all.