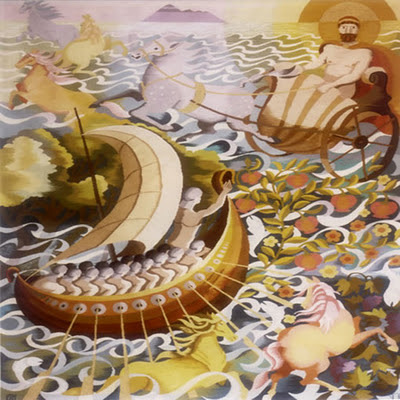 The Irish hero Bran’s Mystical Voyage begins when, after being lulled to sleep by the magical music of a silver branch with white apple-blossoms, he meets a woman who invites him to seek the wonders of the Emain Ablach or ‘Isle of Women’, where there is peace and plenty and no one is ever sick or dies.  Bran sets out after her with twenty-seven companions and three curraghs – nine men in each boat.  After sailing for two days he is encouraged by meeting Mannanan Mac Lir, god of the sea, driving his golden chariot over the sea, who tells Bran he should reach the Isle of Women by sunset.  First however they come across an island on which everyone is laughing, and when Bran sends one of his men to investigate, he begins laughing too, and will not return to the boats. (Is this reminiscent of the Odyssey's Land of the Lotus Eaters?) They are forced to leave him there, and sail away.

Arriving at the Isle of Women, Bran’s boat is drawn into port by a ball of magical thread which the queen tosses to him.  Each of the men is paired with a beautiful woman, Bran sharing the bed of the queen, and they remain there happily, unaware of how much time is passing in the real world, until Nechtan son of Collbran becomes homesick and Bran decides to return home.  The queen warns against it, and especially against setting foot on land, but Bran insists – but when they sight Ireland, so many years have passed that Bran’s name is only an ancient legend, and when Nechtan leaps out of the curragh, he crumbles to dust. (Just the same fate befalls one of Oisin's companions in the legend of Oisin and the fairy woman Niamh.)  At the sight, Bran and his companions sail away, never to be seen in Ireland again.

The hero Maeldune also discovers these same two islands which Bran found, but his is a longer voyage and a happier homecoming.  Setting out to avenge the killing of his father Ailill, his journey is extended because he fails to follow the advice of a druid to take only seventeen men with him.  His three foster brothers swim after the ship, and Maeldune picks them up – but one by one loses them as they visit or pass thirty or so marvellous islands and a variety of other wonders.  At last Maeldune receives the advice of a hermit that he will only be able to return home safely once he has forgiven his father’s murderer.  Maeldune does so and makes a safe landfall.

Along the way Maeldune and his companions see such wonders as the Isle of Ants ‘every one of them the size of a foal’; an Island of Birds; an island where demon riders run a giant horse race; an island of a miraculous apple tree whose fruit satisfy the whole crew for ‘forty nights’; an island where a mysterious beast turns itself around and around inside its skin (and hurls stones at the voyagers); an island of fiery pigs, an island of a little cat;  a ‘four-fenced’ island divided into quarters for kings, queens, fighting men and young girls respectively; an island where giant smiths strike away on anvils and hurl a huge lump of red-hot iron after the boat (surely a volcanic eruption?) so that ‘the whole of the sea boiled up’.

The Very Clear Sea
They went on after that till they came to a sea that was like glass, and so clear it was that the gravel and the sand of the sea could be seen through it, and they saw no beasts or monsters at all among the rocks, but only the clean gravel and the grey sand.  And through a great part of the day they were going over that sea, and it is very grand it was and beautiful. 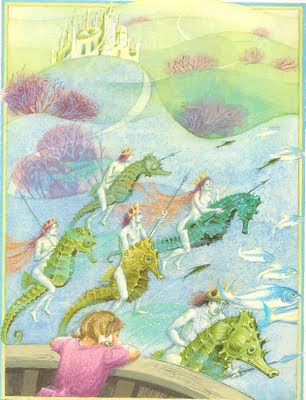 Surely this influenced C.S. Lewis’s ‘Silver Sea’! ('How beautifully clear the water is' said Lucy to herself as she leaned over the port side early in the afternoon...'I must be seeing the bottom of the sea; fathoms and fathoms down.'  Although Lewis soon fills his clear sea with the Sea People and their castle, as shown in this lovely illustration by Pauline Baynes.)

Maeldune soon comes across another marvel: one of my favourites:

The Silver-Meshed Net
They went on then till they found a great silver pillar; four sides it had, and the width of each of the sides was two strokes of an oar; and there was not one sod of earth about it, but only the endless ocean; and they could not see what way it was below, and they could not see what way the top of it was because of its height. There was a silver net from the top of it that spread out a long way on every side, and the curragh went under sail through a mesh of that net.

Diuran, one of Maeldune’s companions, strikes the net with his spear to obtain a piece:

“Do not destroy the net,” said Maeldune, “for we are looking at the work of great men.”  “It is for the praise of God’s name I am doing it,” said Diuran, “The way my story will be better believed; and it is to the altar of Ardmacha I will give this mesh of the net if I get back to Ireland.” Two ounces and a half now was the weight when it was measured after in Ardmacha.  They heard then a voice from the top of the pillar very loud and clear, but they did not know in what strange language it was speaking or what word it said.

I love the way these voyage tales don’t try to explain anything: they simply delight in the marvellous inventions (of the poet, or of God) and convey a sense of great wonder at the things men find when they set out upon the illimitable sea.

Picture credits:  illustration from 'The Voyage of the Dawn Treader' by Pauline Baynes
Bran meets Manannan Mac Llyr : 'The Voyage of Bran': Tapestry by Terry the Weaver/Terry Dunn, 1996

Posted by Katherine Langrish at 01:01